License to kill: Can any amount of evidence convict a white cop who shoots a black man?

Clear video evidence in the Walter Scott shooting wasn't enough; for black Americans this travesty is nothing new 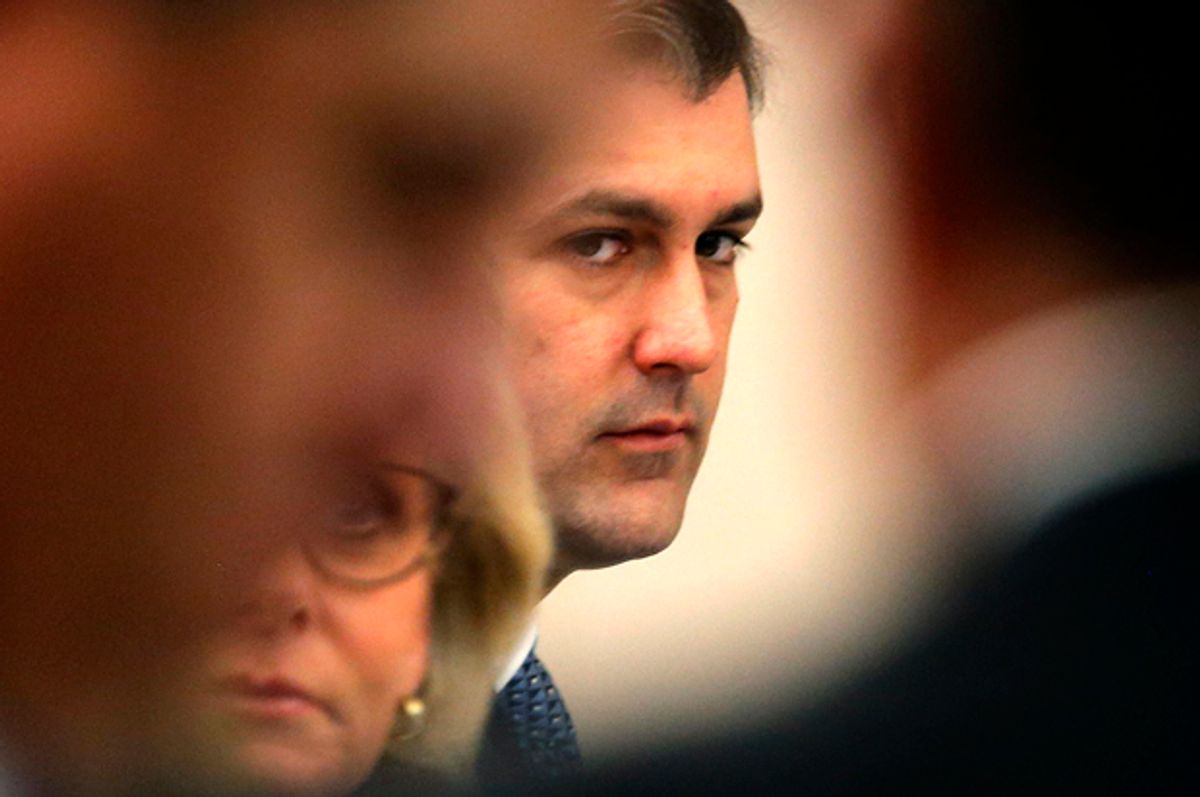 Americans of a certain age have most likely heard some version of the following story. Somewhere in the South, two white sheriff's deputies discover the body of a black man hanging from a tree. There is a rope tied around his neck, his hands are bound and he has also been stabbed in the back. The younger deputy looks at the body and says, “Damn! we have one hell of a mystery here.” The older sheriff replies, “Yup — looks like a n***er version of Harry Houdini. How the hell did he manage to tie his own hands together, stab himself in the back and then jump off of that there tree to commit suicide?”

It would seem that the video-recorded killing of a black man, Walter Scott, by a white police officer named Michael Slager is a 21st-century version of this tale.

In April 2015, Scott’s vehicle was pulled over by Slager, a police officer in Charleston, South Carolina. Scott had $18,000 in outstanding child-support payments. After being confronted by Slager over a broken taillight, Scott ran away. He was unarmed. Slager gave chase and there was a brief struggle. Slager then pulled out his pistol and proceeded to shoot Walter Scott in the back multiple times from a distance of about 20 feet. Slager then put a weapon near Scott’s body in order to make it seem as though he was somehow in fear of his life.

Slager’s partner, Clarence Habersham Jr. colluded with him to alter the crime scene and falsify the subsequent report. Unbeknown to Slager, he was being recorded by a bystander as the latter hid behind some nearby trees and bushes, shocked at the cold-blooded police killing of an unarmed man and subsequent cover-up.

On Monday, a jury in Charleston announced that after 22 hours of deliberation it was unable to reach a decision in the trial of Slager for the first-degree murder of Walter Scott. It appears that of the 12-person jury, only one member refused to render a guilty verdict. In a note, this juror told the judge that he could not “with good conscience consider a guilty verdict.”

Video evidence and eyewitness testimony of the cruel and unnecessary killing of an unarmed black man was not sufficient to achieve a guilty verdict. Such an outcome should not be a surprise. In the United States, police have a de facto license to kill without consequence or responsibility. They are rarely if ever held accountable for such actions; this is especially true if the victims are black, Hispanic or Latino or First Nations people.

Moreover, in an effort to conceal the true scale of the killings and other injurious behavior committed by America’s police against a public they are supposed to “protect and serve,” no nationwide database for keeping such information is maintained or required.

We are left then with another “teachable moment” in what feels like an endless parade of them. Another entry in the necropolis of black and brown — those struck down by police thuggery and violence — in the age of Barack Obama and now the age of Donald Trump.

In many ways the tragic case of Walter Scott is a macabre political and social morality play about America, the law, justice, the color line and power.

There is the victim, Walter Scott. Unfortunately, he is not alive to share his thoughts, fears, and worries — or what went through his mind as he heard the gunshots behind him and then lay on the ground as his life bled out from the holes in his body. He was 50 years old, a former member of the U.S. Coast Guard and a father.

Did his mind revert to “the talk” that most if not all African-Americans have received from their parents, other trusted kin or mentors about how to survive encounters with police? Did he think about the perils and threats black folks face when confronted by state power in a country where they have historically been treated as less than full human beings? When he decided to flee from Michael Slager, did Walter Scott have a premonition that the cop wanted to do great harm to him? Was there something in Slager’s eyes that signaled malice?

There is the police shooter Michael Slager. He lives in a world described by the narrator of Paul Thomas Anderson's film“Inherent Vice” (based on the Thomas Pynchon novel): “All this strange alternative cop history and cop politics, cop dynasties, cop heroes and evildoers, saintly cops and psycho cops, cops too stupid to live and cops too smart for their own good, insulated by secret loyalties and codes of silence from the world they'd all been given to control.”

Slager recited the magical phrase that he was "in total fear” during his confrontation with Scott — words that every cop knows will exonerate him when he kills a person of color. They seem absurd next to any fair measure or observation of the facts. Slager escalated his encounter with Walter Scott, shot a fleeing man in the back and then planted evidence near his dead body to conceal the crime.

Slager is a product of an American culture where Negrophobia is rampant, subconscious white racism the norm, and excess melanin transforms human bodies into fiends and monsters, as seen through the white gaze. For Michael Slager and so many others, blackness and black humanity are provocations and excuses to kill.

As a police officer, Slager knew that he would be protected, from the district attorney through the most senior levels of his department down to his fellow street cops. He gambled that it was much more likely than not that he would be able to kill Walter Scott and not be punished for doing so. It would appear that his instincts were largely correct.

There is the one person, who in a Jim Crow-like act of jury nullification, decided that there was no way he or she could convict Slager of murder. Video and photographic evidence was insufficient for this juror, who apparently believed there must be a “reasonable” justification for a white cop shooting an unarmed and fleeing black man in the back.

Here, philosophers such as George Yancy and Judith Butler help us to understand how the color line and racism influence basic perceptions of reality. Here white racial paranoia, as it did with Rodney King and Eric Garner, can defend the indefensible: Even the subdued and vulnerable black body is always a threat. Butler explained this phenomenon in the book “Reading Rodney King, Reading Urban Uprising”:

It is not, then, a question of negotiating between what is "seen," on the one hand, and a "reading" which is imposed upon the visual evidence, on the other.

In a sense, the problem is even worse: to the extent that there is a racist organization and disposition of the visible, it will work to circumscribe what qualifies as visual evidence, such that it is in some cases impossible to establish the "truth" of racist brutality through recourse to visual evidence. For when the visual is fully schematized by racism, the "visual evidence" to which one refers will always and only refute the conclusions based upon it; for it is possible within this racist episteme that no black person can seek recourse to the visible as the sure ground of evidence.

Consider that it was possible to draw a line of inference from the black male body motionless and beaten on the street to the conclusion that this very body was in "total control," rife with "dangerous intention.'' The visual field is not neutral to the question of race; it is itself a racial formation, an episteme, hegemonic, and forceful.

For the juror who decided that under no circumstances could he vote to convict Michael Slager, justice truly is not color-blind.

There is the white American public that, even after repeated video and photographic evidence of police thuggery and violence against black and brown people, overwhelmingly still believes — as documented by numerous public opinion surveys and other research — that police treat all people fairly and equally, regardless of skin color. This perverse denial of social and political reality is an example of Joe Feagin’s concept of the white racial frame in action.

Meanwhile, black America looks on as another black person is killed by the police and no justice is rendered. Guilt "beyond a reasonable doubt" seems an unattainable standard, no matter what evidence may be presented. These examples of recorded violence against black people function as a type of modern-day lynching photography. Whatever the original intention of those who shoot such videos, their intended social effect may be to terrorize and intimidate an entire community of people into a state of custodial citizenship that Cornel West describes with a deliberately provocative term:

We must never forget that when this grand intellectual forum was established, the precious U.S. Constitution was, in practice, a pro-slavery document. To put it clearly yet crudely, the deep democratization of America was pitted against the ugly niggerization in America. Democratization is the best of the American idea — in principle and practice. The sublime notion that each and every ordinary person has a dignity that warrants his or her voice being heard in shaping the destiny of society remains a revolutionary force in the 21st century — in the face of the power of autocratic empires, plutocratic states, and xenophobic communities. Niggerization is neither simply the dishonoring and devaluing of black people nor solely the economic exploitation and political disenfranchisement of them. It is also the wholesale attempt to impede democratization — to turn potential citizens into intimidated, fearful, and helpless subjects.

Unfortunately, it is unlikely that there will a deus ex machina moment where forces operating outside of story will swoop in to help the protagonist or to alter the ending toward a more just outcome.

The mistrial in the killing of Walter Scott will be followed next year by a federal investigation. That investigation will presumably led by the Justice Department under Jeff Sessions, the Alabama senator with a long record of opposition to the full and equal civil rights of black Americans who is now President-elect Donald Trump's attorney general-designate.

Trump has effectively promised to target blacks and Latinos with a nationwide version of the unconstitutional and humiliating program known as “stop and frisk” — precisely the kind of aggressive and unnecessary policing that all too often results in police killings and other forms of abuse.