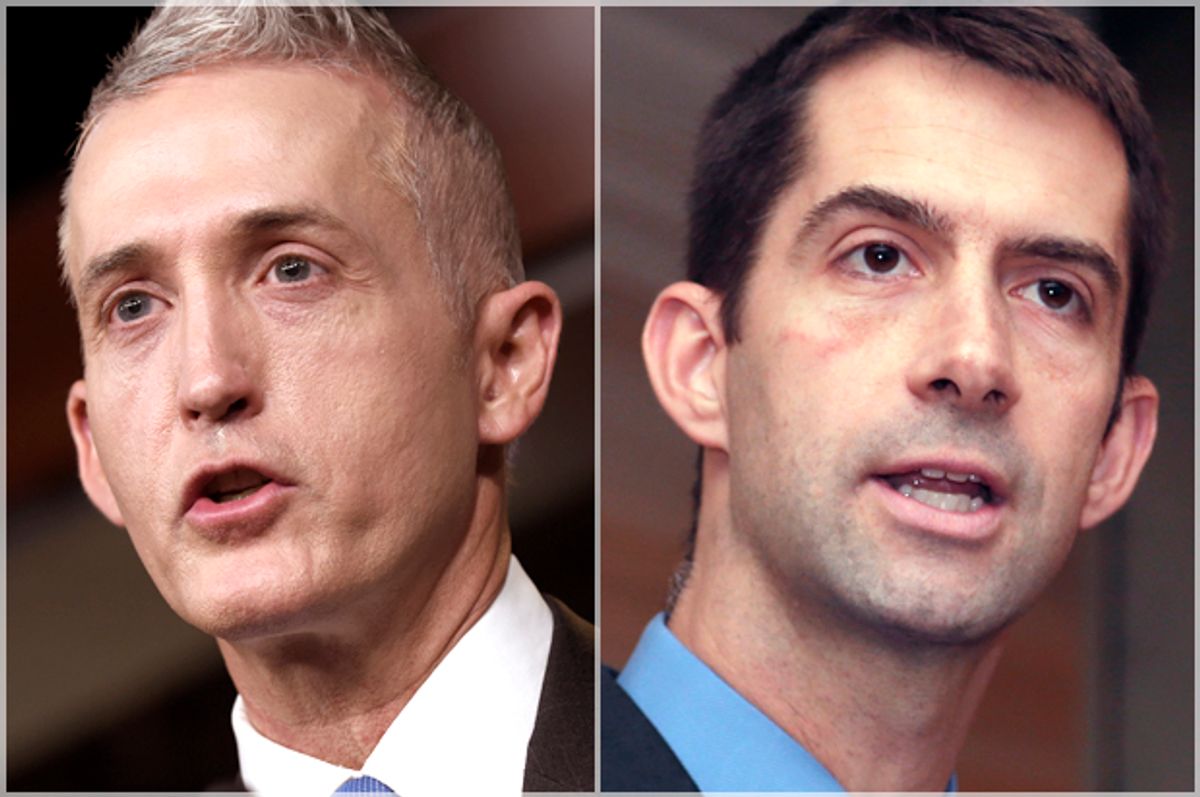 Considering how the Republican Party has fallen in line behind Donald Trump over the last few months, does anyone seriously think that this will ever amount to anything? The Chicago Tribune recently reported on Thursday:

Sen. Tom Cotton, R-Ark., and Rep. Trey Gowdy, R-S.C. . . . agreed that House and Senate committees must keep close tabs on Donald Trump's new government starting next year — not because they want to stick it to a man that neither originally endorsed for president, but because doing so would help rebalance power between the three branches of government.

Sure thing. And I’ve got a bridge over the Potomac to sell you.

Of course there are many, many reasons for strict oversight of the Trump administration. If anything has been made clear by the four weeks of the transition period, it is that this White House will be awash in so many conflicts of interest with Trump family businesses, so much corruption and grift and influence peddling, it will make Warren G. Harding’s presidency look like a model of moral rectitude.

But Trump has already made it clear that either he does not see why his burgeoning kleptocracy is a problem or he does not care. Moreover, the rest of the Republican Party has all but said outright that it is completely fine with the Trump White House being awash in filth so long as he signs whatever bills are slapped in front of him.

For instance, Paul Ryan has been all over TV this week brushing off potential Trump firetraps like lint off a suit. Yesterday the speaker of the House was asked about the conflicts of interest that will almost certainly come about from Trump and his progeny intermingling the business of their family with the business of the nation. Ryan had the following response, according to Politico:

“This is not what I’m concerned about in Congress,” Ryan said Wednesday during an interview on CNBC. “I have every bit of confidence he’s going to get himself right with moving from being the business guy that he is to the president he’s going to become.

“What we’re seeing is what everybody was hoping to see, which is this is gonna be a business guy who becomes president who’s just gonna focus on getting the job done and fixing this country’s big problems. I’m excited.”

Ryan might as well have just put both his hands over his ears and shouted, “LA LA LA LA I CAN’T HEAR YOU!” But the answer was about what one would have expected from him. What he cares about is enacting his long-held vision of Ayn Rand-inspired slashfic: enormous tax cuts, a social safety net sliced to ribbons, and Obamacare and Medicare repealed and replaced by Groupons. So long as he gets a bite at those apples, he’ll happily look the other way if Trump wants to sell naming rights to the Grand Canyon and pocket the profits himself.

And aside from Rep. Trey Gowdy, no one else in Ryan’s caucus has had much to say on this subject. Jason Chaffetz, who heads the House Oversight Committee and before the election was salivating over turning a Hillary Clinton administration into a nonstop parade of subpoenaed officials, simply kicked the can down the road when asked if he would be keeping an eye on the Trump administration. Expect him to keep kicking it until he reaches the ocean.

On the other side of Capitol Hill, Mitch McConnell is also unlikely to let the Senate’s business of repealing not just President Barack Obama’s legacy but most of the Great Society and New Deal programs as well get bogged down in something so mundane as ethics investigations. He is not going to let the opportunity to cut taxes and repeal Obamacare pass by so Tom Cotton can show off his principles.

Besides, after the partisanship of the last eight years, why would anyone give Gowdy or Cotton the benefit of the doubt? Gowdy can complain all he wants about the deeply unfair perception, as he put it in remarks on Tuesday to a room full of Cotton’s fundraisers, that any subpoenas sent to Hillary Clinton or contempt-of-Congress votes held on former IRS bureaucrat Lois Lerner were “politicized.” But that perception existed because the investigations that Congress conducted into the Benghazi tragedy and the IRS “scandal” were in fact part of the GOP strategy to bog down the Obama administration and harm Clinton’s presidential ambitions.

How do we know this? Because even Kevin McCarthy, the House majority leader, admitted that was exactly what the Republicans were doing.

As for Cotton, his statement to the same gathering that “Congress needs to be focused on making sure that taxpayer dollars are being spent wisely and that taxpayers are getting value for their dollar” would be laughable even if the Republican electorate had not rejected the globalization and fetishism of the free market to which conservatives have paid lip service for several decades. As anyone remembers from past GOP administrations, deficits don’t matter so long as Republicans are the ones spending the money.

Of course, both Gowdy and Cotton harbor bigger ambitions and might be positioning themselves for future presidential runs. But if this is the ground they are trying to stand on, as crusading apolitical moralists dedicated to constitutional principles of separation of powers, they are badly misreading the moment when it comes to their own party and the voters who have given it control of the government.