A super white Christmas: The Hallmark Channel gives us TV's most homogeneous view of the holiday 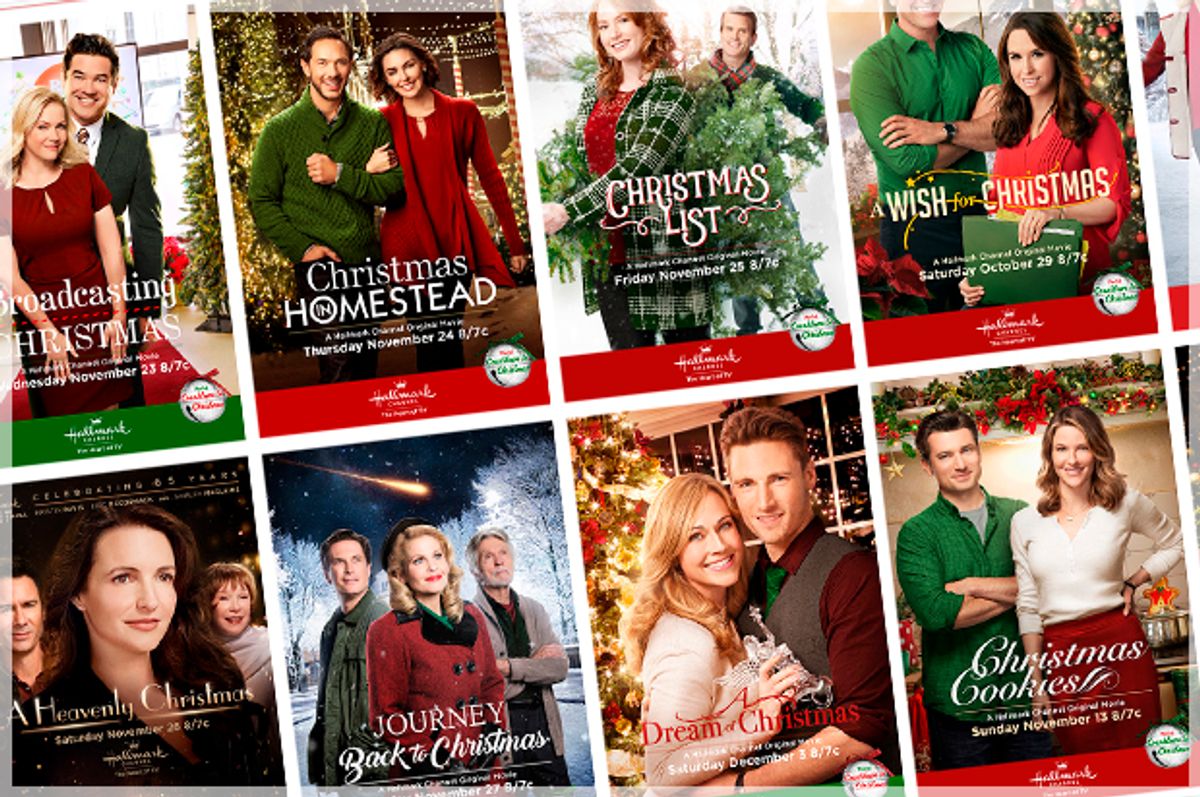 Over the summer the Hallmark Channel hosted a lavish event for television critics and reporters attending an industry conference. Hallmark throws these parties twice a year and invites members of the press to attend, but this generous invite-only affair is really to thank the stars and producers whose work graces the channel.

A centerpiece of these evenings is the presentation of the network’s sizzle reels — that is, an edited package of clips from upcoming projects set to air on Hallmark and its sister channel Hallmark Movies & Mysteries. For some of us, this is where a drinking game kicks in: We watch these reels and take a swig every time we see an African-American, Latino, Asian or Native American actor pop up in one of the cuts.

If you’ve ever watched the Hallmark Channel, you may understand that cruel jest of this particular drinking game is that it’s impossible to get drunk or even mildly tipsy by playing. The summertime sizzle reel, which featured talent from the two networks’ 26 newest holiday movies as well as cast members of Hallmark series such as “Cedar Cove” and “Good Witch” and specials, gave those of us watching two occasions to sip.

This represent a decrease from the network sizzle reel we watched at Hallmark's 2016 winter event. During that one we tallied six appearances by minorities, a total derived by drinking twice for Mariah Carey (who starred in and directed “A Christmas Melody” for Hallmark a year ago) and one erroneous sip for “Desperate Housewives” alumnus Jesse Metcalfe, who someone believed to be Hispanic. He’s not.

What's worse, said tally includes sightings of the black cats shown in the promo for Hallmark’s Kitten Bowl. (There were two in last January’s reel. In July’s reel, there were none.)

“We haven't done nearly a good enough job,” on the diversity front, admitted Hallmark’s Bill Abbott, the president and CEO of Crown Media Family Networks, which operates both cable channels.  “It has been . . . a difficult undertaking that we are committed to not only improving on but becoming proficient at.”

When asked to elaborate on the nature of his company’s difficulties regarding hiring actors and actresses of color, Abbott cited the fact that the majority of production takes place in Canada (which, last I checked, is still accessible by plane, train and automobile by most people) and the channel’s high volume of production.

“These are going to sound like a lot of excuses,” Abbott said. “But the reality is that it does have a pretty big impact on how well we're able to cast and what access we have to casting.”

The holiday season officially kicked off on the Hallmark Channel on Oct. 28, which is when the network began its annual Countdown to Christmas. For the past few years it has transformed into a 24/7 headquarters for made-for-TV Yuletide movies, cycling through its increasingly ample inventory of originals from years past in addition to debuting its newest additions.

At the conclusion of this year’s event the Hallmark Channel alone will have debuted 19 new films on Saturdays and Sundays. Out of those new films only one features a minority, “227’s” Jackée Harry, in a major role. Harry co-stars with Dean Cain and Melissa Joan Hart in “Broadcasting Christmas,” which premiered on Nov. 23, and like Hallmark’s other originals, airs in multiple repeats, including Sunday at 8 a.m. ET and Monday at 6 p.m. ET.  Like Harry, Cain and Hart enjoyed their time in the sunshine of celebrity when they starred in popular network series — Cain in “Lois & Clark: The New Adventures of Superman,” and Hart in “Sabrina the Teenage Witch.”

Although Harry is featured in photos on the show’s webpage, however, it’s Dean and Hart on the series poster and featured in the preview trailer. Harry is nowhere to found.

Maybe we can chalk that up to aesthetic; if you see all 19 holiday posters together, which you can on a press site page, you many notice a certain, um, consistency.

“I like the Hallmark channel, but they never have any stories with African Americans. It would be nice to see us sometimes,” observed one post from someone identified as Bernie commenting on an EW.com article about Hallmark’s holiday slate. Another comment simply noted, “It's obvious what type of audience they prefer.”

Unless you’re a holiday die-hard or a regular Hallmark viewer you may be wondering why this matters. Let’s begin with the obvious statement that holiday-themed viewing plays a huge role in the annual traditions of all kinds of families. So, yes, this is a cultural representation issue and one made especially disheartening when you take into account the way these movies sell a nostalgia for a false, if durable, vision of an America that never existed. But it’s also a problem of hiring and economics.

Sugar-spun traits of “real” America dominate Hallmark’s movie plots through the year, in fact. Plots typically involve characters from or living in the mythological small towns of “real” America, melting the hard hearts of big-city folks or bah humbug grinches with their honest optimism and pure, decent values.

To be fair, Hallmark isn’t the first or only entertainment entity to sell viewers on this kind of imagery. “Dreaming of a white Christmas” isn’t merely a nostalgic Irving Berlin lyric; it’s also a standard television industry practice.

But trucking in such marshmallow fuzziness has increasingly paid off for Hallmark.

Save for the occasional branding slam dunk like NBC’s highly rated “Dolly Parton’s Christmas of Many Colors: Circle of Love,” which attracted 11.4 million viewers in is recent debut, made-for-TV holiday films are a virtually extinct species on broadcast television.

Meanwhile, Hallmark’s investment in them has made its cable channels prime destinations for viewers searching for family-friendly content. According to the most recent Nielsen ratings, Hallmark’s original films “Looks Like Christmas” and “A Dream of Christmas” placed in the cable top 10. Not only that, they were the second and third highest rated non-sports, non-news scripted offerings on cable, topped only by “The Walking Dead.”

The total audiences for these each of movies — 3.9 million for “Looks Like Christmas” and 3.8 million for “A Dream of Christmas” — is larger than that for most of Fox’s Sunday prime-time lineup and pretty much every show on The CW that isn’t “The Flash.”

Hallmark’s cable channels debut original films year-round, making the company one of the most prolific producers, if not the most prolific, of made-for-TV movie content going. “Really, the Hallmark Channel is more reflective of Hallmark Cards and the retail calendars,” Abbott explained. “So we've gone into fall, and winter, and spring, and summer, as well as Valentine's Day, Kitten Bowl, and a lot of other events that also do really big ratings. We've expanded our business and become much more of a 12-months-of-the-year consistent player.”

Christmas is by far the most lucrative time of year for Hallmark’s channels, generating 30 percent of their annual revenue. To give you an idea of how much cash that yields, both Hallmark Channel and Hallmark Movies & Mysteries raked in more than $400 million in ad revenue this year, according to a network source who did not want to be named. (Parent company Hallmark Cards, which took Crown Media Holdings private in May, had an annual revenue listed at $3.7 billion for 2015, according to Forbes.)

That makes Hallmark a hiring force in Hollywood for recognizable actors and actresses whose days of being highly in demand are mostly behind them. Among those whose careers Hallmark has extended are Andie MacDowell, Lori Loughlin of “Full House” fame, Lacey Chabert (“Party of Five”), Jack Wagner (“General Hospital”) and Marc Blucas (“Buffy the Vampire Slayer).

But the problem with Hallmark’s hiring, to return to Abbott’s observation regarding production volume, is that it uses the same talent over and over again. That’s great news if you’re a fan of Candace Cameron Bure, Chabert and Danica McKellar, but it doesn't do much for minority actors who starred in network series that were just as popular during the same era.

“If you look at our roster of talent, you'll see that it's ‘Wow, I saw them in a movie last year’ or ‘I saw them in a movie six months ago,’” Abbott said.  “It's just sometimes a matter of volume, and we need to begin to incorporate a better diverse group into our regular round of activity. I think that that will go a long way toward helping fix the problem.”

Carey, for her part, recently signed a three-picture directing, producing and co-starring deal with Hallmark Channel, and the channel is near to announcing another deal with a high-profile, widely-known African-American television personality.

But beyond those individuals and a few others including Harry, Eddie Cibrian, Rita Moreno and Vivica A. Fox, minorities have been all but absent in Hallmark’s recent scripted projects. And the channel hasn’t featured a minority-dominant cast since 2013’s “The Watsons Go to Birmingham,” featuring Anika Noni Rose and Shameik Moore — and before that 2009’s “Relative Stranger,” which starred Eriq La Salle (“E.R.”) and Cecily Tyson.

Abbott insisted that the network is making a concerted effort to change its practices but seems to be still mulling over what exactly improving the network’s diversity will entail. “The Rooney Rule is a great one,” he said, referencing Pittburgh Steelers coach Art Rooney's hiring plan specifying “that for every opening, you're going to have [diversity] as the first consideration. It's something that I like better than a ‘mandate.’ We'll see. We'll see how we do. If we don't do well, then maybe it's time to consider something that's a little bit more aggressive.”

Around 85 original films are currently planned to debut in 2017, Abbott said. Asked whether the network’s sizzle reel will challenge the critics who are trying to keep count next summer, he replied, “I would be shocked if that's not the case.”