BULLSH**TER OF THE DAY: Bill O'Reilly, for morphing into Fox News' resident socialist 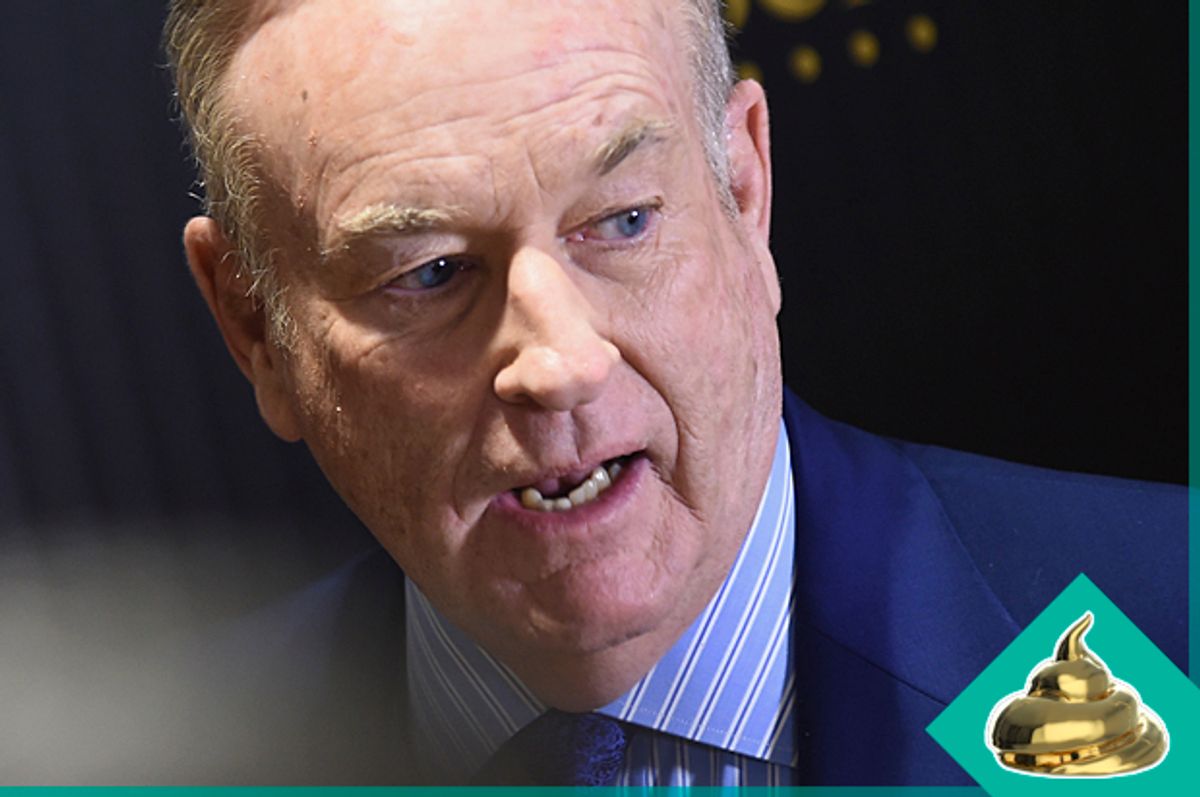 "[M]uch of [George] Will's negative analysis is driven by personal animus. And it is here that he does his readers and viewers a great disservice. . . . Will's analysis is ridiculous. It is true that Carrier corporation has an obligation to maximize profits. That's true. But if it does that by hurting the country in which it is operating, then the man in charge of that country, the president, has an obligation to challenge that. Under Will's analysis, which is absurd, any corporation hurting American workers should be left alone, hey, it's their business, let them do what they want to do, maximize profits. Does that make sense to you? Does it really?

President Trump's obligation, his obligation – and it should have been President Obama's as well but it wasn't – to try to protect American jobs. So Trump had a conversation with Carrier and basically said, "if you hurt your workers by moving to Mexico expect that we will use legal tariffs to hold you accountable." That's not socialism. That's hardball economics. . . . Memo to George Will: Drop the personal stuff. Tell the truth."

Last week, Trump said he struck a deal with Carrier that would save roughly 1000 jobs. Soon after that, it was revealed that it was actually fewer than 800 jobs, and in fact, many of those jobs will eventually (read: soon) be lost to automation anyway — on top of the thousands that will be shipped to Mexico regardless. This deal has generated a lot of criticism. From the left, some worry of irresponsible handouts to CEOs, while from the right, analysts like George Will worry that these amount to socialist-leaning policies.

Well, O'Reilly is so up into Trump's head, that he can't tell right from left anymore. In fact, Trump, who keeps on saying he "loves free trade" is actually advocating for tariffs, which are essentially mechanisms to regulate or even prevent free trade. Now, Mr. O'Reilly, protecting workers' rights over company interests is essentially what social democracy is. And no, you can't have it both ways.

In any case, even if O'Reilly honestly believes that tariffs are not a left-wing policy, what Trump did with Carrier actually incentivizes the very behavior that he's supposed to be punishing. Who's stopping other companies now to threaten to go to Mexico in order to secure tax breaks? A piece of advice, Mr. O'Reilly? Drop the personal stuff. Tell the truth.

We awarded him a golden turd just last week, and here we are again. But to pick one, and just because it's that time of the year, O'Reilly has for years been a solo crusader on the fictional war on Christmas that apparently is being waged somewhere. Worry no more, because O'Reilly "won the war."