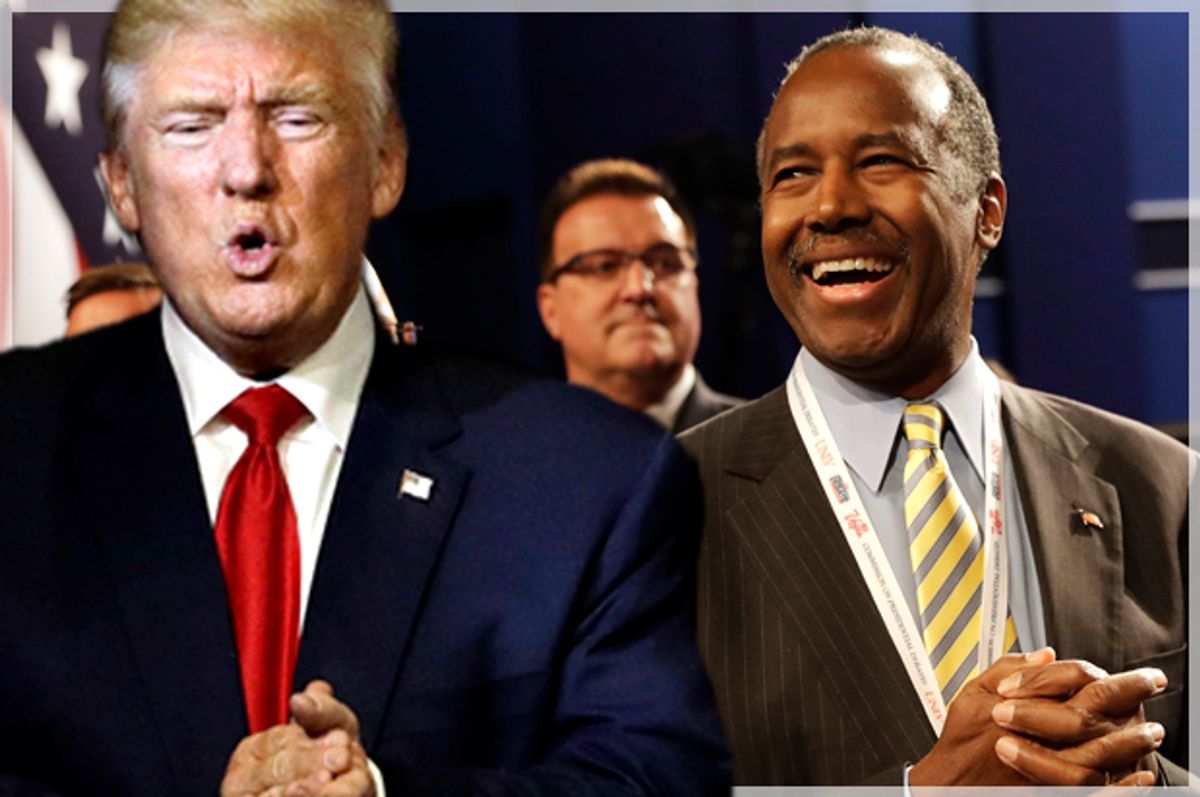 Andrew Jones was one of the greatest three-card monte hustlers in New York. For four decades, he would separate tourists and other marks from their money as he deftly moved three cards around on an overturned cardboard box or improvised table.

Jones beckoned his victims to come closer by promising that they could win easy money in a fair game if they just guessed where the red card was. Like other dealers, he would even let a bystander “win” a game to show that it was “fair” — of course, said bystander was one of his partners, an essential element in the con game. Jones would get the crowd’s attention by barking lines such as, “For all of you who have not had your eyes tested in the last year or so, I am here for you!” and “I have two blacks and one red, like you have two eyes and one head!” Of course, it's almost impossible to win a game of three-card monte against a dealer as skilled as Andrew Jones. But this did not stop people from trying. Jones rarely if ever lost.

Donald Trump, a lifelong New Yorker, certainly saw men like Andrew Jones. Trump, a skilled carnival barker and con artist of a different type, likely learned a great deal from their showmanship and pizzazz — the ease with which the monte dealers and other street hustlers separated fools from their money through misdirection and the gift of gab. Trump would apply those skills to defeat Hillary Clinton by promising the world to tens of millions of easily confused and gullible angry white voters — promises that, as evidenced by his Cabinet appointments, he is already gleefully and unapologetically betraying. But one should not pity Trump’s voters too much: As an old adage holds, you can't con an honest person.

While Trump may have won the presidency, thanks to a myriad of voter-suppression tactics and an antiquated Electoral College system, he still has several problems. Trump lost the popular vote. The majority of the American people do not like him. He is facing a crisis of legitimacy. Moreover, Trump’s apparent sexist, racist and misogynistic attitudes are strikingly at odds with a country that elected Barack Obama twice and is increasingly diverse, cosmopolitan and global. He is also an authoritarian strongman with fascist inclinations, who has threatened to overturn basic constitutional rights and protections.

What is he to do?

Now is a good time for him to deploy his “best black friend” or to trot out a female appointee, in order to gesture at the idea that he will be president of all the people and not just the angry whites who voted him. Such a move can also help to normalize him with the corporate news media (see these examples from The New York Times and The Washington Post).

This is a cynical and dishonest embrace of “diversity” that manipulates the optics of skin color and gender to advance a right-wing agenda that does not serve, advance or protect the civil rights or life opportunities of women or people of color.

It is also an example of the system and practice known as “racial capitalism” that Nancy Leong described in the Harvard Law Review, by which “white individuals and predominantly white institutions use nonwhite people to acquire social and economic value.”

Ultimately, Trump’s efforts at “diversity” are a type of human chess or a hustle, one at which American conservatives have shown themselves to be highly skilled in the post-civil rights era.

Trump has nominated Betsy DeVos to lead the Department of Education. She is a billionaire businesswoman with no experience in public education, who wants to actually destroy the very public institution she will be in charge of monitoring and protecting.

Trump has selected Linda McMahon, the former CEO of World Wrestling Entertainment, to lead the Small Business Administration. McMahon was an executive and co-founder along with her husband, Vince McMahon, of a multibillion-dollar global business that does not allow its athletes to unionize, treats them as independent contractors — to deny them retirement benefits as well as leverage in negotiations — and has faced repeated lawsuits regarding health and safety issues. McMahon is also one of Trump’s political donors, having reportedly given his presidential campaign $6 million (after previously haven given millions more to his private foundation).

Gov. Nikki Haley of South Carolina, an Indian-American, has been picked as ambassador to the United Nations. Haley has no substantial experience in international affairs or diplomacy.

And then there is the curious case of the fabulist Ben Carson. He is a black conservative who was one of Trump’s major rivals early in the 2016 Republican primaries. Trump attacked Carson without mercy, of course, even going so far as to compare him to “a child molester.” Yet, Carson is now somehow Trump’s nominee to serve as secretary of Housing and Urban Development.

Carson is a pediatric brain surgeon who has neither worked in the federal government nor led a large and complex bureaucracy. His plans for the department apparently include rolling back civil rights protections against discrimination in home ownership and renting. Carson’s only apparent qualifications for the position are that he is black (thus “urban”) and supposedly once lived in a housing project. Carson has even admitted that he is not qualified for a senior position in the federal government because he has no experience.

In his role as professional “best black friend,” Ben Carson is also a fantasy projection of racial progress, understood through the Horatio Alger myth of meritocracy that clouds the thinking of many (white) conservatives: Carson grew up black and poor, once stabbed a friend, found God in a bathroom and then “pulled himself up by his bootstraps” to become a successful doctor.

Of course, the basic facts of Carson’s life are very much in dispute. He received federal and other anti-poverty assistance as a child. He attended public schools. And it's not clear he ever really lived in public housing. It is also very unlikely that Ben Carson shanked anyone, as the title character did in the 1974 movie “The Education of Sonny Carson.”

This superficial embrace of “diversity” by Donald Trump helps to insulate him from charges of racism and sexism because in the simpleminded and flat thinking that is all too common in post-civil rights America, how can Trump be “racist” or “sexist” if he appoints women and people of color to senior leadership positions? By this logic, the presence of Ben Carson or Nikki Haley somehow cancels out the odious racism, sexism and white nationalism embodied by Trump’s senior adviser Steve Bannon or Jeff Sessions, the attorney general-designate.

Trump’s diversity gambit is also a great example of how Republicans and conservatives decry affirmative action as a type of “racial spoils system” or “quota system” for “unqualified” black and brown people as well as women, but then in an act of projection fulfill that stereotype themselves.

Ultimately, good governance and leadership is provided by competent, intelligent, experienced and forward-thinking people, despite the types of bodies they may inhabit. Life experience and the particular challenges and perspectives that may come from being a person of color, gay, a woman, disabled or "the other" more generally can serve to enhance one’s wisdom and capacity to lead. But by themselves and without the other prerequisites, they are wholly inadequate claims to competence.

Unfortunately, in an era of resurgent white identity politics and the skillful machinations of Donald Trump, the phony diversity of the president's Cabinet will be nothing more than camouflage for an agenda that seeks to hurt and marginalize people of color and women.