My personal Michigan recount: The official vote review is off, but I only needed answers from one family — my own

I've been too upset to call home before now, but I needed to hear from my parents why they voted for Donald Trump 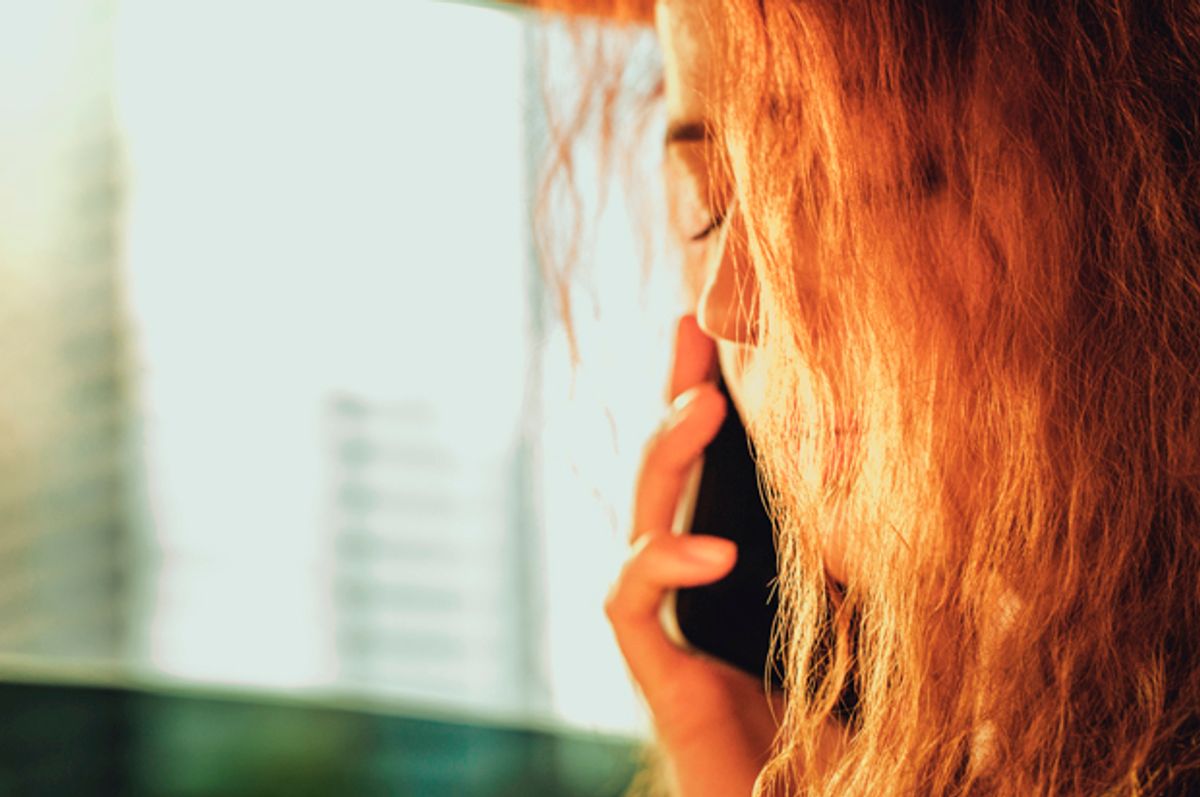 “Get over it already,” Mom said, after I reiterated my shock that she and my father had helped elect Donald Trump and told them I strongly backed the recount in my home state.

“Move on,” Dad added on the other line. “Just worry about your own business.”

While I usually called every night, I’d been too upset after the election to phone. As a Manhattan journalism professor still consoling distressed students of all backgrounds, this was my business — especially after swastikas were found in a Jewish student’s dormitory room at the college where I taught and a black friend’s daughter was texted “N***** Lynching” at her Pennsylvania university.

As weeks wore on, my folks’ candidate kept Twitter blasting "Saturday Night Live," the media and Democrats’ desire to challenge the election results but could not tweet, “Stop the hate speech and hate crimes” to the Ku Klux Klan and so-called alt-right groups he continued to empower. I felt sick, unable to sleep or concentrate. Never before had I been ashamed of my country — or my parents.

On a tight book deadline, I’d begged off from visiting for Thanksgiving. Hanukkah and Christmas fall on the same weekend this year, but the thought of fighting my family over politics made me panic. My mind flashed to the old Southside Johnny song lyrics: “Whatever happened to you and I/ that I don’t want to go home.”

Growing up in Michigan, I was proud of my mother and father: chic, funny, smart former New Yorkers who seemed more sophisticated than other Midwesterners. On the Festival of Lights, my favorite holiday, we’d light the menorah, eat potato latkes with apple sauce and open a present on each of the eight nights. Yet I never really fit into our suburb. Though my public elementary was filled with fellow Jews, I was awkward and friendless. Luckily, my parents let me attend the diverse, artistic private school I’d picked.

When I brought home a black classmate in sixth grade, my neighbor used a Yiddish derogatory term for blacks.

What’s that, I asked my parents, both from Lower East Side, Yiddish-speaking families.

“It means our neighbors are idiots,” Mom said, insisting we never use that term.

“Ignore the racist assholes,” Dad snapped, surprising me with profanity. “We had relatives murdered in the Holocaust because Hitler scapegoated Jews.”

“We treat everyone equal. No slurs are ever allowed in our home,” my mother told us.

I didn’t understand how this lesson applied to us until, when I was 11, I was traumatized by TV coverage of 1972’s massacre of Israeli Olympic athletes in Munich, as well as news of wars against Israel that my cousins fought in. Yet my mom, a beautiful redhead, patronized stores owned by local Lebanese and Iraqi families. She taught me to hate only the enemies who had vowed to annihilate Israel and to never stereotype. My dad is a physician. Working at his Detroit office one summer, I was proud to learn he secretly treated many poor minority patients who couldn’t pay.

After Mom put Dad through medical school, she chose to be a housewife while raising four kids. Like many who get more conservative as they age, he veered right, pushing conventional politics and professions on me and my three brothers.   In junior high, during in my raging Sylvia Plath stage, I was talking to Dad in his den and he said, “Go get me a cup of coffee.”

“You already have one subservient female in the family,” I answered.

“Feminism is an abomination,” my brother joked.

“You know I’m the one paying tuition allowing you to learn that feminist crap,” Dad responded.

I reluctantly fetched him coffee, with sprinkled cookies Mom added to the saucer.

As an English major at University of Michigan, which Dad dubbed “the People’s Republic of Ann Arbor,” and later at New York University, I was my family’s lefty outcast. Dinners with my Republican relatives were acrimonious, especially when my oldest brother turned into a staid doctor, raising four kids in the Midwest like Dad.

Now in my 50s with a liberal husband who gets his own coffee, I have analyzed how my blood relations could vote for someone I see as dangerously nationalistic as Hitler. Since I don't want to hate my own kin or half the country, I have desperately tried to see their side.

After my father suffered a near fatal heart attack at 80, he had retired. Dad grew up as a poor street kid and put his four kids through college and grad school. Now he was making trusts to help his grandchildren pay for higher education, too, and he was  obsessed with the inheritance tax Trump promised to repeal.

That was why he voted for Trump? “Nothing’s worth having a president I don’t respect,” I replied.

Dad shared a story I’d never heard. When he first applied to medical school, he didn’t get in because of Jewish quotas. He worked a fellowship for a year before he was admitted. “It only paid $300 a week,” he wrote. “Your mother worked to support me. We lived paycheck to paycheck for five years, sleeping on a sofa bed. After working hard for 60 years, why should my money go to the government instead of my kids and grandkids?”

OK, that I understood. As they aged, my parents worried about their finances and their legacy. So did I.

Still, I couldn’t fathom their inability to see how Trump went against everything they’d taught me. I loved my parents, but I couldn’t get over my devastation. Depressed and sleep deprived, I felt like I was sitting shiva. When a Jewish activist colleague whom my mom knew died, I called to tell her. Before we hung up, I asked, “Aren’t you afraid of Trump’s sexism and racism and the hate crimes he’s inciting?”

I didn’t know how my Mom, who’d been happily married 60 years, could pardon Trump’s five children with three wives and “grabbing pussy” tape.

“Look, Trump’s rhetoric is disgusting. But I find Hillary dishonest and condescending. I couldn’t stand either candidate the whole election,” she told me.

“Trump’s not anti-Semitic, Ivanka converted and he has Orthodox grandkids,” Dad said. “The right is better for Israel.”

Was that true? As a proud Zionist myself (for a two-state solution), with close cousins in Jerusalem, I’d also been dismayed by what I saw as the left wing’s anti-Zionism. I’d been sickened by the whole boycott, divestment and sanctions or BDS movement against Israel, preferring instead the nickname “bald-faced lies, deception and slander." When an idiot burned an Israeli flag at the Democratic Convention, I was stunned that Hillary Clinton didn’t publicly denounce it. But even if Republicans were better for the Holy Land and the economy, I didn’t think that should be enough to win my parents’ votes. Then again, who was I to dictate what their main issues were?

Dad shot back a Conservative Free Press link blaming rich liberals for the hate crime increase. Oy. I returned fire with a piece quoting Trump’s decree that American Muslims had to “register,” the way Nazis made Jews wear yellow stars. I paraphrased the adage Dad once told me: “All it takes for evil to flourish is for good people to do nothing.”

It seemed encouraging that my father kept attempting communication. Was it from guilt? For a month after the election, that was how we maintained contact.

“All identity politics is the mantra of ignorance,” my father said.

Wait! “So you do denounce Trump’s hate speech?” I asked.

“It’s all bluster and bullshit,” Dad answered. “But better than Bonnie and Clyde back in the White House.”

I rolled my eyes at his nickname for Hillary and her husband, whom both my parents saw as crooked. I slowly conceded that Hillary came with too much baggage named Bill and citizens unhappy with Obama wanted change. Though my biggest disdain was actually for the 41 percent of voters who stayed home when I realized that the more than 95 million Americans who didn’t cast a ballot had decided the election.

“So all the kids are coming for the holidays. When are you visiting?” my father asked me.

“Not this year.” I decided to mail my Hanukkah cards and presents instead. I remained despondent, wanting to hide inside my home this December with my Democratic husband, a good book and no makeup, like Hillary.

Scrolling though my Facebook news feed, I took solace in the fact that my middle brother’s 17-year-old daughter posted “Pence Confirms Trump will be an anti-LGBT president” with other anti-Trump screeds. My older brother’s son, a 20-year-old Michigan college student, kept sharing Hillary photos, the Statue of Liberty sobbing and an image of Batman slapping Trump. I responded with lots of hearts. My blonde niece, an NYU freshman living around the corner from me, sent videos of herself at ongoing protests, chanting “Not My President.” At least my family’s next generation would carry the torch for anti-discrimination and diversity.

Sensing my continued distress, my two younger brothers let me know they had voted for Hillary and couldn’t stand the president-elect. I hadn’t known! Then my oldest doctor brother texted me an image of Popeye saying “I Yam Digustipated.”

I thought he was making fun of my hurt. Until he texted, #imwithher.

He was? My eyes watered. When the Michigan election clerks began their re-tally, I calculated my  family’s recount. Fascinatingly, all my brothers, sisters-in-law and their kids were with her, and with me, for the first time ever. While I lost my dream of a female president, this felt like a historic shift. I chose to take these votes as proof that my parents were still the good people I thought they were, having taught us the right values, after all.