Sears death watch update: Is it time to prepare an obit for our least-essential department store?

The company has lost $1.6 billion so far this year — and it might be too late to turn things around 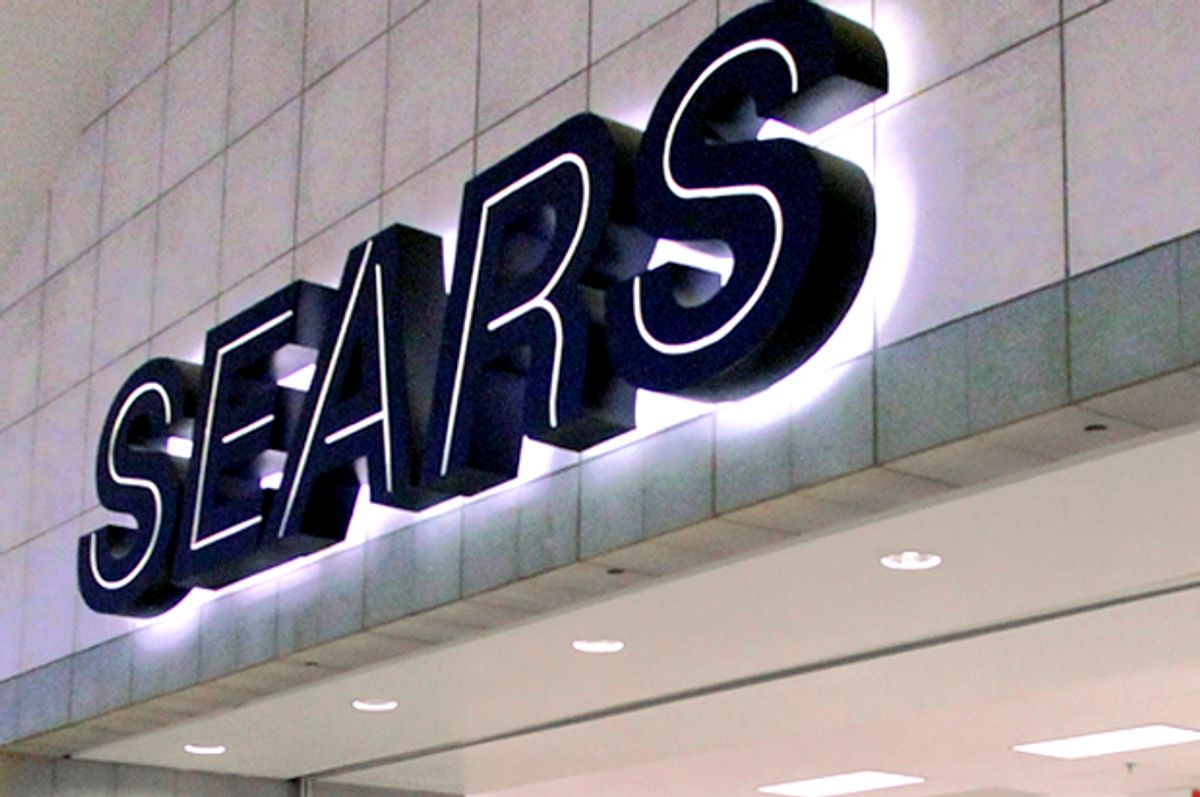 Quick: Name a reason to shop at Sears.

If you’re struggling to identify one, you’re not alone. Even the company’s web team can’t figure it out. On Thursday, the company’s virtual storefront featured home appliances, a pool table, exercise equipment, watches, men’s jeans and a snow blower. A photo advertising a women’s knit sweater was positioned next to a WeedWacker.

Consider this the retail version of throwing everything against the wall to see what sticks — and according to the company’s latest numbers, nothing is sticking.

Sears Holdings, which owns Sears and Kmart, reported on Thursday a loss of $748 million for the three months that ended on Oct. 29. This is the company's 20th consecutive quarterly loss and worse than the $454 million loss the company posted for the same period last year. Revenue fell 9 percent last quarter to $5.21 billion. Same-store sales, a key retail metric, dropped 10 percent at Sears and 4 percent at Kmart. The company lost $1.6 billion in the first 10 months of the year, compared with $549 million in the same period last year, according to its regulatory filing.

These grim numbers were announced a week after the departure of two top-level executives: James Balagna, an executive vice president in charge of the company’s home-repair services and technology backbone, and Joelle Maher, the company’s president and chief member officer. Former Goldman Sachs banker Steve Mnuchin also resigned from the Sears board last week after President-elect Donald Trump nominated him to head the Treasury Department.

This leaves Sears President and CEO Edward Lampert, the billionaire hedge funder and Ayn Rand devotee, with gaping holes in his leadership team as he continues his Sisyphean task of rescuing Sears from irrelevance. While predictions of a Sears collapse have been heard for years, the numbers are starting to show that the company is running out of options.

Even with the $500 million Sears Holdings has borrowed from investors, including Lampert’s hedge fund, ESL Investments, the company can no longer rely on borrowing against its collateral. It needs customers, and right now the company is being beaten in virtually every aspect of its business.

Sears Holdings entered the holiday shopping season with about $258 million in cash and about $5.7 billion in current liabilities (payments that will be due within 12 months). Even with the company’s massive holdings in real estate and sales of valuable brands like Kenmore appliances and Craftsman tools, the deficit between its total assets and total liabilities is nearly $3.4 billion, including nearly $1.6 billion it needs to pay its merchandise suppliers in the coming months. The company’s stock has shed 38 percent of its value since the start of the year.

“They’re past the point of being able to salvage themselves and turn it around,” Bruce Winder, co-founder of retail and manufacturing consultancy Retail Advisors Network, told Salon. “The negative momentum at some point is impossible to stop, and they’re at the point now that in a year, or maybe two, they’ll hit the bottom. Consumers aren’t going to Kmart or Sears anymore.”

Winder and others, including Neil Saunders, the CEO of the retail consulting firm Conlumino, believe there’s no way for the company to turn back from its death spiral, despite what the company’s top brass said on Thursday.

“We have fallen short on our own timetable for achieving the profitability that we believe the company is capable of generating,” Chief Financial Officer Jason Hollar said in a prerecorded conference call. “The team remains fully committed to restoring profitability to our company and creating meaningful value.”

“What does Sears stand for?” Sward asked Salon. “Sears unfortunately stands for so many different things that I don’t think there’s anything that’s a standout. I would go to Sears for appliances and tools, but I’ve certainly never thought of them as a headquarters for apparel.”

Sward says the issue isn’t that Sears doesn’t have good products and competitive prices. Instead, he said, the problem facing Sears is that it isn’t the first choice for buyers of any of its core product categories. If consumers need tools, they go to Home Depot or Lowe’s. If they want outdoor or work apparel, it’s Dick’s Sporting Goods not Sears. Electronics and home appliances? That’s solved with a trip to Best Buy. And who’s buying apparel and shoes at Sears?

Fixing that problem — giving a reason for people shop at Sears again — could take much more time than the company has.