Ballad of a Bin Man: A.J. Weberman, the man who says he’s behind Bob Dylan’s Nobel Award for Literature

With his Nobel Prize, Bob Dylan has entered the highest echelon of artistic recognition, thanks to A.J. Weberman 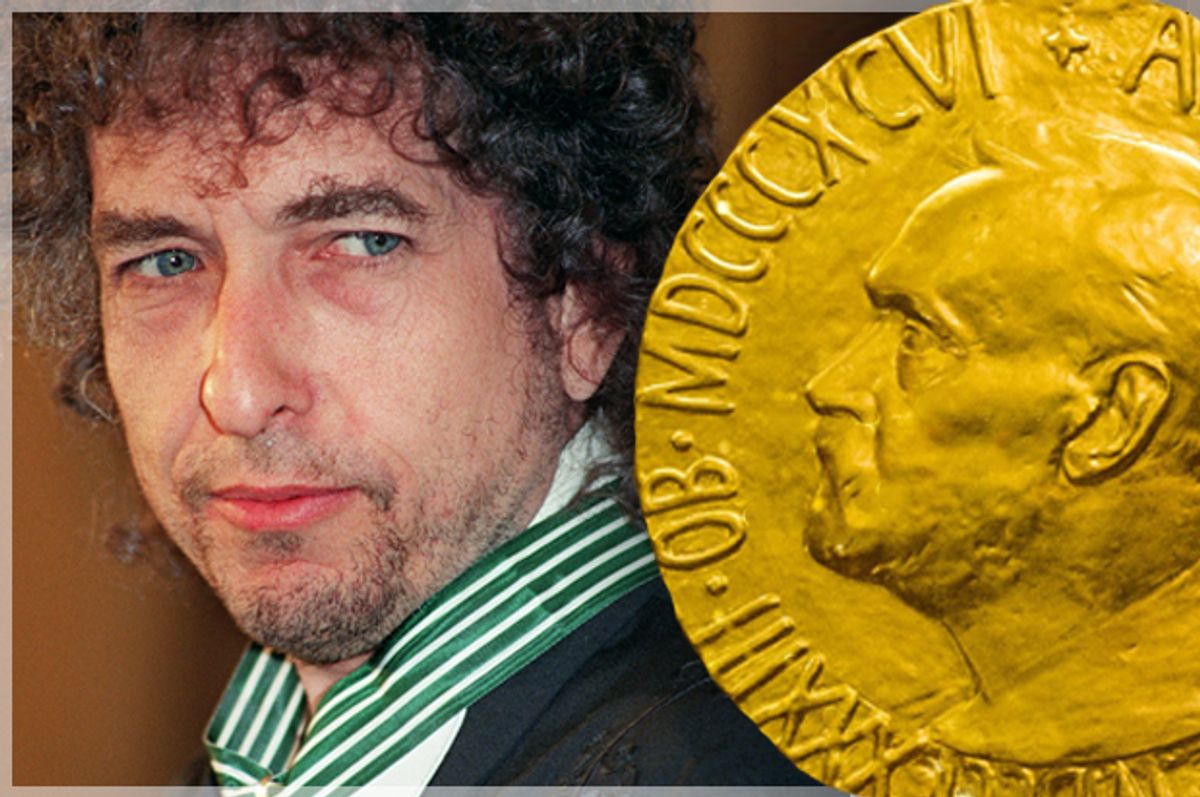 “So Dylan won the Nobel Prize for Literature,” said Alan Jules Weberman, in a recent YouTube video, alternating between hits on a smouldering, half-burnt joint and deep, phlegmy coughing jags. “He coulda never done it without me. What the story is, is quite simple.”

Beginning in the mid-‘60s, A.J. Weberman has been a Dylan obsessive: a superfan, a stalker, and a connoisseur of Dylanological detritus. Now in his early 70s, Weberman is balding, weathered, and a little world-weary, given to rambling soliloquies and paranoid conspiracy theories. As a younger man, he was robust, weird, and many, many more things: a self-appointed “garbologist,” a “Dylanologist,” and “Minister of Defense, Dylan Liberation Front.”

Strangely imposing in his hefty leather jackets, windshield-scaled spectacles, military boots, and frizzy mane of hair, Weberman was cut from the same far left, slightly-unhinged, Vietnam-era countercultural cloth as yippie icons like Abbie Hoffman or Jerry Rubin. He was a radical, a freak, an anti-fascist; all labels worn with with indignant pride.  A 1971 Rolling Stone article described him as “a seventh carbon copy, 90 pounds heavier, of Bob Dylan circa 1965.” It’s an irresistible image: A.J. Weberman, the mutated Bob Dylan, the inverted, cankerous image, the nemesis.

In one of the more infamous moments in Dylan lore, the singer attacked Weberman on the streets of New York City. “He grabbed me, threw me to the ground, and started bangin’ my fuckin’ head against the sidewalk,” Weberman remembers. “I had it coming.” And indeed, he probably did.

In 1977, now-defunct label Folkways Records released “Bob Dylan vs A.J. Weberman – The Historic Confrontation,” an album of pitchy, combative phone conversations between the two, secretly recorded by Weberman circa 1971. At one point in the conversation, frustrated by his tormentor's pressing questions about the secret language of rock, Dylan asks Weberman, “Why don’t you just get a guitar, man, and write some songs yourself?”

“Because,” Weberman responds, emboldened, “there’s a need for someone like myself. No one else is doin’ it.”

In 1965, A.J. Weberman took acid and put on “The Freewheelin’ Bob Dylan.” Between the drugs, the music, the lyrics, and Weberman’s own undeniably exceptional mind, something fell into the place, like a needle finding the groove of an LP. As Weberman recalled, “I remember thinking, Wow. There was something happening here. These words weren’t just strong together. They mean something.”

So Weberman began developing a system for decoding Dylan. In the early 1970s, he completed a computerized word concordance of Dylan's lyrics — an alphabetical list of the principal words used in Dylan's songs, an exegetical tool usually reserved for major works of literature like The Bible, Shakespeare, and Homer. In 2005, Weberman published a home version of the word concordance, the “Dylan To English Dictionary,” a phonebook-thick tome offering the secret meanings of Dylan’s words. It is credited to “A.J. Weberman (Dylanologist).”

“Dylanology, a word I coined,” Weberman wrote in the book’s introduction, “is exclusively concerned with digging behind the text of Dylan’s poetry to find the subtext . . . The Dylan To English Dictionary’ is years ahead of its time and like any new, controversial new [sic] theory — is found to meet with resistance from those who wish to maintain the cultural and academic status quo.”

Within the academy, Weberman’s drug-divined “Dylanological Method” (a mix of biographical reading, transliteration, insider-y yippie culture know-how, and excruciatingly close-reading) is less controversial than it is utterly irrelevant. (Among Weberman’s more cockamamie hypotheses is the idea that many Dylan lyrics, and sometimes whole songs, are addressed to him directly) While Dylan himself has found purchase in scholarly settings — Oxford-schooled professor Christopher Ricks teaches him alongside Keats and Elliot, Dartmouth prof. Lou Renza has been asking students to interpret Dylan’s “song-poems” since the mid-‘70s — there’s little room on college curriculums for A.J. Weberman.

“There is, more than other contemporary or near-contemporary, a pretty serious Dylan bibliography out there,” said Richard F. Thomas, author of the forthcoming book “Why Dylan Matters,” and a Harvard classics professor who teaches a freshman seminar on Bob Dylan. “The first major study was Anthony Scaduto’s ‘Bob Dylan: An Intimate Biography,’ in 1971. I remember getting that when it came out. It was mixing up biography with the lyrics. People weren’t initially able to separate the song from the singer, which now people do as a matter of course.”

Weberman was, as he said, ahead of his time. He was teaching a course on Dylan at New York’s left-wing Alternate University before Scaduto’s book was published, and producing his interpretative analyses well before academics like Christopher Ricks or Richard F. Thomas. Weberman was the first Dylanologist, convinced that he and he alone held the key to unlocking the secret meanings of Dylan’s songs. “It was my mission to find out this great left-wing message that Dylan had for the masses,” Weberman exclaimed, “that would allow people to break the chains of capitalist slavery and live forever in a utopian society!”

And where better to find utopia than in the trash?

“My mother wasn’t really an observant Jew,” said Weberman. “And my father was super observant. So there was a conflict there. My father would go through the garbage to make sure my mother didn’t buy non-Kosher food.” For the young A.J., the image of his father rummaging through the kitchen waste has the structuring effect of a primal scene. The idea of rooting for clues in the bin, and the distinction between that which is retained and that which is cast off or expelled, would avail itself years later.

Bob Dylan had purchased an apartment at 94 MacDougal Street in 1969. Smack in the former heart of the early-‘60s folk scene that had nurtured the young singer’s talent — Cafe Wha?, where Dylan played his first NYC gig, was just up the street — it was an attempt at seclusion and privacy. The Dylan family’s previous home, upstate in Woodstock, NY, had been compromised by a steady torrent of unwelcome guests, entreating upon his would-be-quaint homestead and skittering across his roof.

In his 2004 autobiography “Chronicles,” Dylan describes what sounds like a rural assault out of “Night of the Living Dead,” beset at all hours by “unaccountable-looking characters, gargoyle-looking gals, scarecrows, stragglers . . . gatecrashers, spooks, demagogues.” So he returned with his wife, children, and the family dog to Manhattan. But A.J. Weberman was waiting for them.

Blame Izzy Young. The prominent folkie, who ran Greenwich Village’s Folklore Centre where a young Bob Dylan spent time in the early ‘60s, listening to records and fraternizing with other wayward youth. Young tipped Weberman off, giving him the address of Dylan’s new apartment. So Weberman took his then-girlfriend, an artist named Ann Duncan, by Dylan’s place. He rang the buzzer, hoping to meet his hero and explain his Dylanological method. As Weberman tells it, Dylan stomped down to the stoop and snarled, “You’re not gonna get into my life!”

Undeterred, Weberman returned later that same evening, “high on Colombian pot as usual.” Determined to access the source of Dylan’s inspiration, He cased the joint, looking for a way in, wondering, “How can I penetrate this guy’s security?” Then he noticed the outdoor garbage pails adjacent to the building. Suddenly: inspiration. “I thought back to my father,” Weberman remembered, “going through my mother’s garbage.”

“I went and reached into Dylan’s garbage,” Weberman said. “There was a first draft of a letter to Johnny Cash in Dylan’s handwriting. I said, ‘Holy cow!’ Talk about reinforcement! I knew I was gonna come back every night and get this garbage.” To his mind, the dumpster-dive paid off. Weberman found a suggested track list for a forthcoming album, a letter Dylan had written to his mother, and a photo of Jimi Hendrix. There was also plenty of straight-up trash: food scraps, dirty diapers, and old lamp.

It may seem unhealthily obsessive — and certainly just gross — but Weberman was situating himself in a fairly long philosophical and anthropological tradition. Garbology (another discipline Weberman claims to have invented) is now a semi-serious academic field, in which scientists and archeologists root through the landfills and rubbish tips to get a better sense of the past. The general idea is that you can learn as much about civilization by what it tosses away as by what it keeps.

Well before Weberman, the French poet and critic Charles Baudelaire sang the praises of the chiffonnier, or rag-picker, who sifted through the refuse of 19th century cities. In his 1857 poem “The Rag-Picker’s Wine” Baudelaire writes, “One sees a ragpicker knocking against the walls, Paying no heed to the spies of the cops, his thralls / But stumbling like a poet lost in dreams; He pours his heart out in stupendous schemes.”

The German philosopher and cultural critic Walter Benjamin was similarly preoccupied with trash. In his 1940 essay, Benjamin referred to the notion of historical progress as a catastrophic process of “piling wreckage upon wreckage.” Much of Benjamin’s thought was given over to intellectually sifting through this wreckage: dumpster-diving into the discarded ideas and objects of the past in an effort to scrounge up some sign of a hopeful future.

At the risk of overstating his influence, A.J. Weberman was involved in a similar project. By 1970, Dylan’s career was in a bit of a holding pattern. The release of Dylan’s “Self-Portrait” record was met with critical ambivalence, even hostility. In Rolling Stone, writer Greil Marcus famously asked of the album, “What is this shit?” As Weberman wrote in a January 1971 issue of the underground newspaper East Village Other, “Talking to Dylan was like talking to a ghost. The old Dylan, full of ideas and stories was gone, replaced with a shell.”

Weberman’s goal — his god-given mission — was to bully Dylan out of hiding, and harass him back into fighting form. He’d heckle him by phone. He’d root through Dylan’s trash. He’d prod the poet in person about betraying the left. He’d lead his Dylanology class on field trips to his front stoop, like some chuffing pied piper.

He founded an ad hoc political group, a self-appointed support staff, the Dylan Liberation Front, with the aim of re-radicalizing the “Prince of Protest.” “We went over there to Dylan’s apartment,” said Weberman of a particularly memorable encounter. “I started to give a lecture there. Then Dylan came out. He said, ‘Al, what’d you bring all these people ‘round my house for!’

“I told him it was a demonstration against him and all he’d come to symbolize!”
According to Weberman — who is, at very least, an unreliable narrator, prone to self-aggrandizement and delusion — Dylan eventually thanked him for his efforts.“If I didn’t come along at the time that I did, Dylan’s career would have continued to go downhill,” Weberman boasts. “He would have never received his Nobel Prize. He would have been forgotten about, by his own admission.”

It’s pretty generous (if not ludicrous) for Weberman to afford himself such lofty credit. But there’s a scrap of truth in it. The confrontations, the wild essays and articles about hidden meanings, the bootlegged telephone call recordings, even the ritual garbage-picking — it all spoke in its own strange way to the fathomless depth of Dylan’s work. What other songwriter warrants their own word concordance and interpretive codex? Who else could merit such manic fascination? Whose garbage would be deemed so worthy?

In his YouTube address to Dylan regarding his high-profile Nobel win, Weberman serenades his hero. Not with a Dylan number, but with something by Frank Sinatra. “When somebody loves you,” Weberman croaks, Bic lighter crackling to life as he sparks his joint, “It’s no good unless he loves you, alllll the waaaaaay.”