Dear Donald Trump: Here's how not to be the worst president in history

Mr. President-elect: Forget Lincoln and FDR. The comparisons to worry about are Andrew Johnson and James Buchanan 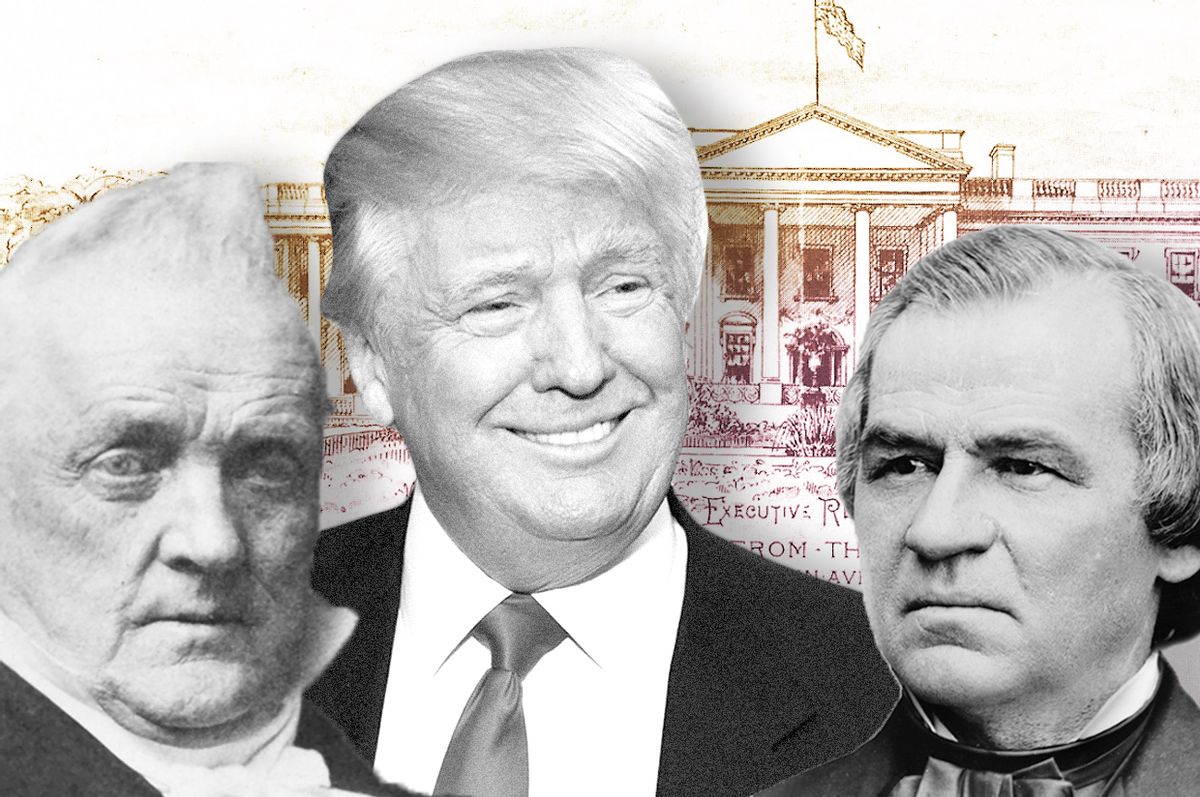 At this moment, you may be hoping that Americans will someday regard you as a great president — a Washington or Lincoln. It might be more helpful, though, if you thought about how not to be ranked the nation’s worst president, someone who outdid even Andrew Johnson, Warren G. Harding and James Buchanan — our least respected presidents according to surveys of American historians.

With your refusal to divest from the family business, you’re off to an ominous start. If historians conclude that your presidency significantly enriched you or your family, you won’t have a prayer of cracking the top tier of presidents. Even the Wall Street Journal says the only logical approach is to sell every piece of the family business.

If you rescind U.S. participation in the Paris Agreement on climate change, that act alone could cement your reputation as our worst president. Do you really want to bet your entire reputation on the bizarre notion that climate change is a hoax? Not only does nearly every climate scientist believe you are wrong but, according to a March study by Yale and George Mason, most Republican voters believe in human-caused global warming. Following the logic of Pascal’s Wager about God might be helpful here. If the Paris Agreement is a mistake, the nation will be out some money and President Obama’s reputation will suffer. Opt out, however, and the results could be catastrophic — for both the planet and your presidential brand.

Similar logic dictates you think carefully before scuttling the Iran nuclear deal. Should the agreement not curtail Iran’s ability to develop a nuclear weapon, the failure will be President Obama’s. Scrap the deal and you will own any future progress Iran makes on a weapon of mass destruction.

Before laying waste to the Affordable Care Act and other aspects of President Obama’s legacy, recognize that historians rate him an above-average president, regardless of what your advisers may tell you. Historians despise Andrew Johnson largely because he tried to undo the racial progress achieved by his predecessor, Abraham Lincoln.

President Harding’s rational belief that he was unqualified for the nation’s top job led him to make disastrous personnel decisions. Pathologically insecure, he surrounded himself with friends and toadies, many of whom turned out to be spectacularly corrupt. So, thank you, I guess, for not appointing the unqualified and apparently unstable Rudy Giuliani as secretary of state, but now your team tells us that Rex Tillerson, the CEO of Exxon Mobil, is the favorite for the job. Really? The man who heads a company being investigated for lying about global warming for almost 40 years? The man who said, when discussing the use of renewable energy, “What good is it to save the planet if humanity suffers?” That’s the best you’ve got? History will not be amused. And humanity may indeed suffer.

Historians have awarded James Buchanan their presidential booby prize for several reasons. He called the territorial issue of slavery “happily, a matter of but little practical importance” and believed the federal government could do nothing to stop secession. Despite being a Pennsylvanian, he was a slave-state sympathizer. This led to some awful actions, including improperly inserting himself into the Supreme Court’s Dred Scott decision — consistently ranked as the Court’s worst — and backing mercenary William Walker’s attempts to conquer Nicaragua and Guatemala in the hope they would become new slave states. Honduras executed Walker by firing squad in 1860 and historians have been taking aim at Buchanan ever since.

Historians tend not to vilify presidents who reasonably try to achieve sensible goals. They rate Jimmy Carter as below average, but not by much. They are less kind to Richard Nixon, whose significant achievements are, and always should be, overshadowed by his crimes.

Finally, think judiciously before violating long-standing political norms. Appointing someone like alt-right ringleader Steve Bannon as your top adviser entails significant reputational risk, as would any other move that smacks of intolerance. Following your authoritarian, Nixonian impulses — by trying to “open up” the libel laws, criminalize flag-burning or penalize enemies like Jeff Bezos, owner of the Washington Post and CEO of Amazon — is high-risk behavior.

Were I in your shoes, I’d be terrified about being condemned by history. To avoid such harsh judgment, I would study hard, surround myself with people who know what they’re doing, and pick my fights cautiously. Self-interest, in part, would prevent me from appointing Dr. Ben Carson to a cabinet post but, well, never mind.

Of course, you live so much in the moment you might not even care what historians will say. Good luck with that. But there will be a future and one thing is certain: Your brand will outlive you whether you want it to or not.

Andrew Feinberg has written for the New York Times, the New York Times Magazine, GQ and Playboy. His novel "Four Score and Seven" imagines that Abraham Lincoln returns to life to interact with a presidential candidate who resembles Donald Trump.