Prevention is just a start: HIV's still rampant more than three decades after it was first discovered

About 5,753 people will become infected with HIV each day 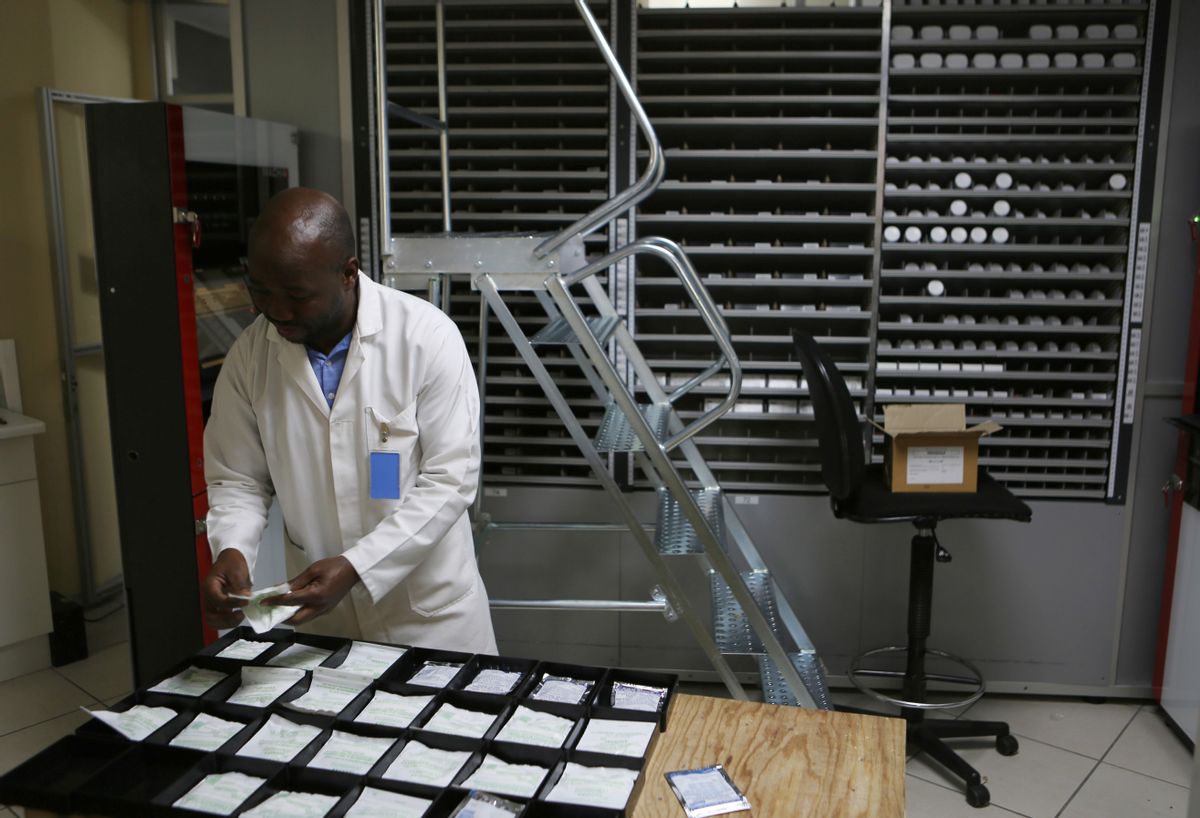 In this photo taken Friday July 15, 2016, a pharmacist makes up packets of drugs at the Helen Joseph Hospital in Johannesburg. In the largely black Johannesburg community of Alexandra, one project is trying to make drug delivery as convenient as withdrawing cash. What looks like a row of ATM machines has been installed in a shopping center, ready for an official rollout later this year. People will be able to walk up, insert their medical registration or speak via a video monitor with a pharmacy worker, select their prescription and pick up the drugs that pop out. (AP Photo/Denis Farrell) (AP)
--

Much less is known about the levels of infection among other vulnerable populations who may be forced to hide their risk, such as men who have sex with men, drug users or those whose risk is less appreciated or simply ignored, such as refugees and migrants or the disabled.

In the United States alone, between 40,000 and 50,000 Americans test positive for HIV for the first time each year, with African-Americans and Latinos vastly overrepresented. This has been the case for the last two decades. Every year, the number of people in the United States who learn they are now living with HIV is equivalent to the number of people who live in the city of Annapolis, Maryland.

Why aren’t we screaming and jumping up and down with fury at the sheer magnitude of the AIDS epidemic? As an HIV prevention researcher for more than two decades, I conducted a rather unscientific survey to find out. I asked a smattering of people in their twenties — a cohort known for their willingness to jump up and down in fury — what they would like to know about HIV that they didn’t know already.

What I found is that younger people see AIDS as a chronic medical condition rather than a death sentence. However, they also expressed a general feeling of unease that, even though they didn’t often think or talk about it, HIV is a bigger problem than is let on by the general media.

They suspect but don’t fully appreciate the social factors that make HIV/AIDS so hard to prevent and ultimately eradicate. They, like many of us, may not understand that AIDS is fueled more by poverty, discrimination and social injustice than anything else. This, I believe, is a main reason for the disease still being rampant.

Awareness of disease but not of struggles

This exercise made me remember the reasons I became an HIV researcher. I moved to New York City in the 1980s, when I myself was in my twenties. I came home one day to find my next door neighbors sobbing in each others arms — one had just been diagnosed with AIDS, the other knew he was about to be.

I remember the scare as the story spread of three young women running around the neighborhood stabbing people with hypodermic syringes, yelling gleefully “Now you have AIDS!” I saw the beautiful, young busboy from the restaurant where I worked: homeless, begging for money, for food, dying publicly on the street with no health insurance and nowhere to go. Variants of these scenes continue to play out around the globe.

The AIDS epidemic has led to significant medical advances and increased the scientific understanding of viruses in general. Anti-HIV treatment drugs have been found to prolong the life of many people living with HIV. In fact, treatment has resulted in a decrease in the number of AIDS deaths and has led to a dramatic increase in the number of people living with HIV over the last five years.

One thing hasn’t changed: The number of people who are newly infected with HIV each year has remained relatively stable for decades.

AIDS is clever. After all this time we still don’t have a vaccine to prevent the virus. That’s not to say that developing prevention strategies hasn’t kept people up at night.

Indeed, the inability to develop an effective vaccine has given rise to the field of HIV prevention medicine. This version of prevention relies on the use of anti-HIV treatment drugs to prevent an individual from either acquiring or transmitting HIV: stopping mother-to-child transmission (PMTCT); “test and treat” to identify and medically manage people with HIV; post-HIV exposure prophylaxis (PEP); and pre-HIV exposure prophylaxis (PrEP).

Unfortunately, this prevention approach, which relies on anti-HIV treatment drugs, creates additional anti-HIV treatment availability shortages and contributes to drug resistance — already on the rise. Also, with the exception of PMTCT, anti-HIV drugs are not available to the vast majority of the global population.

I, and many others, have spent much of our adult lives trying to figure out how to prevent the spread of HIV in the absence of a vaccine, without relying on anti-HIV treatment drugs. I can say unequivocally that we have failed to put a significant dent in the number of new HIV cases that occur each year.

It’s not that there haven’t been success stories along the way. Syringe exchange programs have been around for over 30 years, yet remain rare and underfunded. Condoms came out from under the covers and sparked a hunger for conversations about sex and sexuality.

The problem with condoms — both male and female — is that they require two voices in the negotiation of their use. In the meantime, we’re still stuck arguing about making them available, instead of exploring ways to make them a fun and essential part of sex.

Future successes must go beyond prevention tools. They must deal with the social factors that face populations at greater vulnerability of acquiring HIV, such as poverty; discrimination based on gender, sexual orientation, race/ethnicity or religion; and illicit drug use. And everything is amplified for people ages 15-24, who bear the brunt of new HIV infections.

A recent report found that sexually transmitted infections in the United States are at their highest levels ever. Syphilis, which was the harbinger of the massive increase in HIV infections in the late 1980s, rose most sharply last year — by 19 percent.

Is it much of a leap to suggest that history may repeat itself? Increasingly, experts warn that AIDS will not be ended by medical means alone. AIDS will be conquered only by prevention that addresses the hard issues of inequality, discrimination and social justice.

I’d say that’s something 20-year-olds are already screaming about. Consider this more fuel for that fire.

Maureen Miller is a professor at the Columbia University Medical Center.