The cold comforts of "Designated Survivor" and "Madam Secretary"

"Designated Survivor" and "Madam Secretary" aren't soothing, but their fictional politics is saner than reality 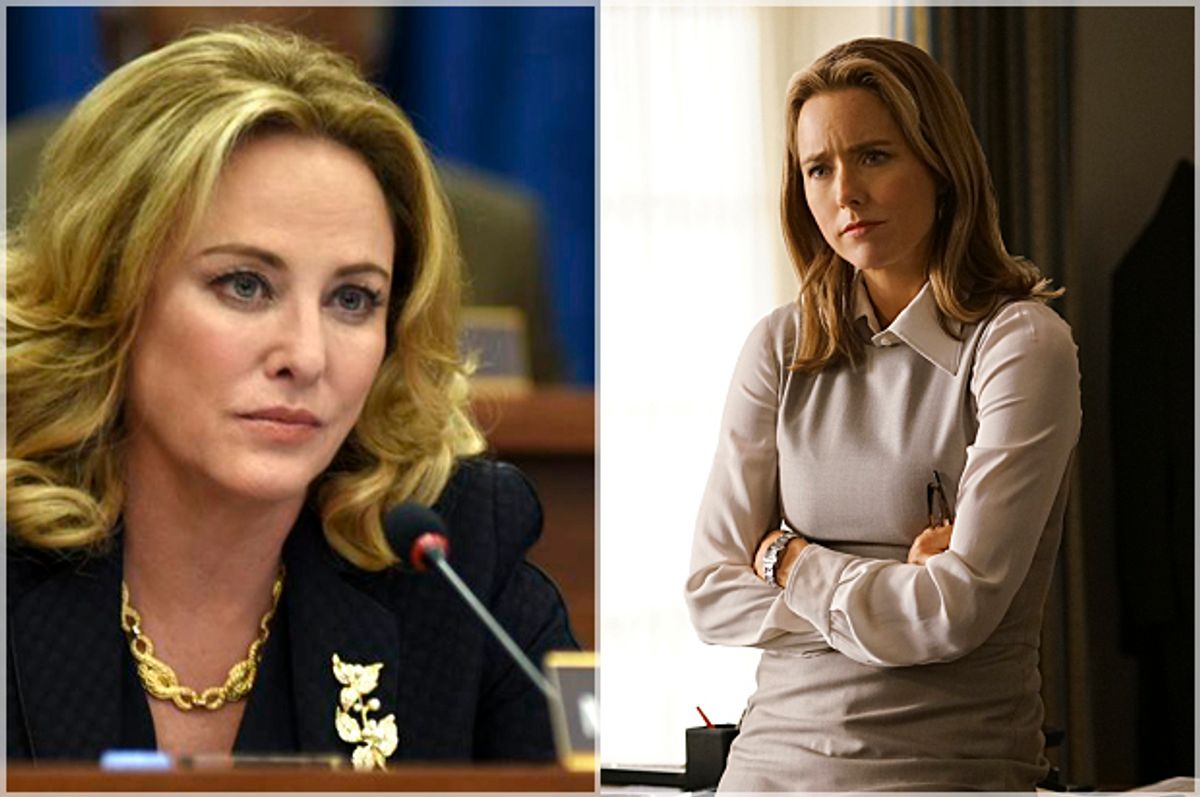 Our expectations don't always pan out as we expect them to, as the election reminded many of us. Sometimes, in fact, such reversals prove to be much scarier than we could possibly fathom. When unforeseen turns befall us, some react by searching for a preferable alternative to reality on television. In the post 9/11-era, "24" assuaged our sensations of impotence. People who weren't on board with George W. Bush could find solace in President Josiah Bartlet's philosophical bent and eloquence on "The West Wing."

Meanwhile, as America seemed tumbled into the Upside Down, Hillary Clinton retreated into the woods for her post-election relief — which is completely understandable. The extreme strain of campaigning for the presidency, not to mention enduring this Gordian knot of a race, would make anyone yearn to go back to basics. Trees, fresh air, spotty cell phone coverage . . . yep, that sounds just about perfect.

Besides, it’s not as if the fictionalized administrations currently seen in prime time would offer any comfort to Clinton or many people who voted for her. On CBS’s “Madam Secretary,” a series partly inspired by Clinton, Secretary of State Elizabeth McCord (Téa Leoni) is struggling mightily to help her boss President Conrad Dalton (Keith Carradine) hang on to his job in the midst of an electoral college deadlock. Right now, that battle isn’t going well.

The delicate détente she was instrumental in brokering with Iran is on the verge of collapse, and in the closing scene of last week’s episode, International Atomic Energy Agency inspectors were accosted by Iranian soldiers. Failure would not only bring an ignominious end on her political career but, as a logline for Sunday’s new episode teases, could spark war in the Middle East.

ABC’s "Designated Survivor" POTUS Tom Kirkman (Kiefer Sutherland), the former Secretary of Housing and Urban Development catapulted into the Oval Office after a devastating bombing wiped out the congressional and executive branches, just discovered the attack may be an inside job.

The storyline that stands to aggravate any election PTSD from which Clinton may be suffering could be the one coming up on ABC’s “Scandal,” which returns at 9pm Thursday, January 19. Its new season launches a presidential election smackdown between former First Lady Mellie Grant (Bellamy Young) and Governor Francisco Vargas (Ricardo Antonio Chavira). But one of Mellie's biggest challenges may be to step out of the long shadow cast by her ex-husband, outgoing President Fitzgerald Grant (Tony Goldwyn).

What's true in the real world also holds in the fabricated small screen version: politics is extremely brutal to women at the top of the game. But if there is some comfort to be gleaned from all TV's various views of life from the peak of political ambition — besides the optimistic suspicion that “Scandal” creator Shonda Rhimes may give viewers the female president the majority of voters wanted — it is in knowing that television is still providing captivating portraits of capable, determined women holding office.

Make no mistake, television’s scripted renditions of Washington D.C. make the place look as messy as ever, although each new anxiety-inducing addition to our real president-elect’s cabinet certainly makes those small screen administrations look sane and reasonable. Current storylines also parallel reality in some respects, even if they were imagined in writers rooms many months ago.

Only a few weeks ago, few could seriously entertain the thought that either Clinton or  her opponent, Donald Trump, would win the popular vote but lose the electoral college. For that matter, the thought of a deadlock seemed ludicrous to be point of being comedy fodder.

Thus, in television’s version of 2016, an electoral college deadlock gave us an “accidental” president on “Veep”: Laura Montez (Andrea Savage), who unceremoniously bumped Selina Meyer (Julia Louis-Dreyfus) out of office. Such an unlikely tie also led to the precarious situation still playing out on “Secretary.”

The alternate universe presented Wednesday nights on “Designated Survivor”  birthed a president in Kirkman, a D.C. outsider and an Independent, whose legitimacy still being questioned. That Kirkman is attempting to rebuild the United States government virtually from scratch with no mandate and an ally in a surviving member of congress, Peter MacLeish (Ashley Zukerman), who may actually be an enemy of the state, makes the Oval Office look infinitely less appealing than a nature hike.

None of the visions of world politics and diplomacy presented on these shows promise comfort to the viewer. Yet some optimism exists in both “Designated Survivor” and “Madam Secretary,” in the sense that they present government officials as true servants beholden to the people as opposed to calculating powermongers. And in each series, that concept of service above all is being upheld in no small part by female politicians and advisers.

One character on “Designated Survivor,” Virginia Madsen’s Speaker of the House Kimble Hookstraten, actually feels more palatable that she may have been had our actual election gone differently.

Hookstraten is the one of two living members of the former Congress; the Republicans were savvy enough to tap her to be its designated survivor. (Real world Democrats, take note.) And she's the sort of adversarial and brazenly ambitious character built to be as admired as she is detested.

But as we face the reality of an autocrat-led government filled with one man's cronies in real life, Madsen’s Hookstraten comes off as healthily skeptical.

The writers of “Designated Survivor” have made Kirkman the sort of sensible centrist moderates would want in a president. He’s ethically beyond reproach, honest to a fault with the press, hawkish in a time of near-universal paranoia yet principled enough to protect the civil rights of citizens under attack.  He also has two women in his inner circle of counselors, including his wife Alex (Natascha McElhone) and his Special Advisor and longtime adviser Emily Rhodes (Italia Ricci).

Rhodes is a ride-or-die Kirkman loyalist, willing to put his career above her own when the sharks are circling. Hookstraten, though, has no intention to make Kirkman's execution of the presidency easy, regardless of how wrecked and fearful the country happens to be.

She's blunt, takes charge and doesn’t mince words.  And this attitude doesn't appear to stem from a sense of party loyalty, at least not at this point in the series. Rather, she simply doesn’t trust people who have power handed to them.

“It’s not our job to give the president what he wants. It’s our job to determine what’s best for the country,” she says to an incoming member of a newly elected Congress, and she’s absolutely right. She had to earn trust and her access to influence. (At some point I hope she reveals a forearm tattoo that reads “Trust No Bitch” rendered in Gothic font.)

In contrast “Madam Secretary” stands as a series that explores the intricate give-and-take of diplomacy while its main character strives to make the world a better place, even if it means going against political headwinds.

As is the case with Kirkman on “Designated,” McCord didn’t come to Washington out of a burning desire for a title, but to serve the country. Having negotiated a deal with Iran, McCord sought to preserve that hard-won victory by pushing her moderate boss, Dalton, to run as an independent. Dalton lost his party’s nomination to a hardliner, Governor Sam Evans (J.C. Mackenzie), in last season's finale after he broke rank by acknowledging the effects of climate change – a position that McCord inspired him to take.

McCord also recognized that if Dalton’s adversary Evans wins, the administration’s entire legacy will be dismantled and she’ll more than likely take the blame for the president's defeat.

Women across the country who anticipated celebrating Clinton's shattering of the highest glass ceiling in the land on November 8 may recognize that feeling. That moment stood to have reverberations around the world, and it didn't happen. After recovering from the shock of that upset came the urge to soul search, then hold someone accountable for the campaign's colossal miscalculations. In that moment, Clinton became the Democratic party's true North of guilt. No wonder she, in turn, headed out into the wilderness.

"OK. Easy,” her husband Henry (Tim Daly) tells her. “You can’t blame yourself. Even if Evans wins.”

“Then who?” the tired Madam Secretary asks him, to which he replies, “Well…the voters.”