A few good Monuments Men: Saving art from looting and destruction — especially in the Middle East — is a military matter

The British Army is recruiting experts who fancy themselves George Clooney 2.0 to preserve global cultural treasure 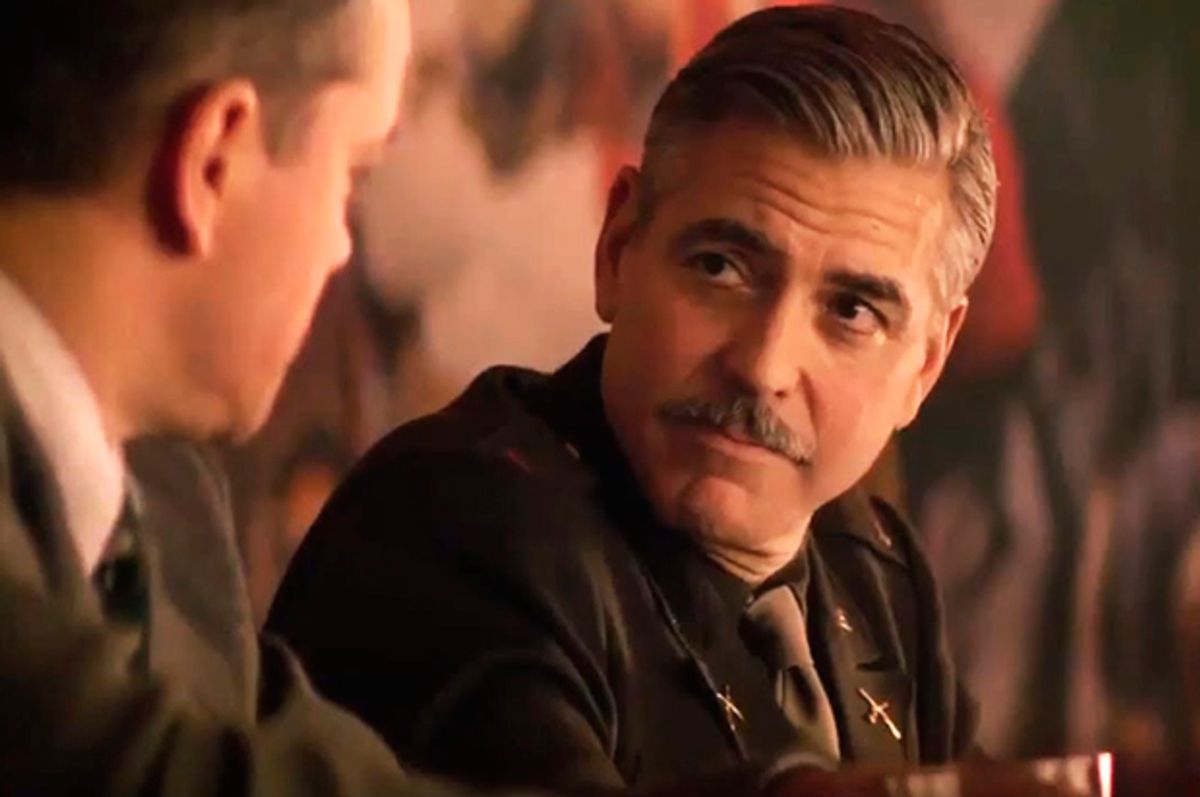 The British Army recently announced that it would be recruiting 15 to 20 new officers with specializations in art, archaeology and antiquities who will be deployed in the field, just behind the front lines, to help identify, protect and track art and antiquities that are in danger of being damaged, looted or destroyed.

This news, broken first by The Art Newspaper, is, of course, particularly relevant to Middle Eastern conflicts, where groups like ISIS have shown a giddy eagerness to destroy ancient monuments, on the scale of whole cities like Palmyra and Nimrud, as well as individual pre-Islamic statuary that are deemed heretical. Of course, the flip side to this is that these groups are also happy to profit off the very objects they condemn, and they are funding their activities through illicit trade in antiquities.

These works of great artistry and historical importance — which cannot exactly be blamed for not being Islamic artworks, if they were created a millennium before the Prophet Muhammad was born — can be saved from the mallet if they are destined for the auctioneer’s hammer.

Not long ago, scholars like me (I’m a specialist in the history of art crime) had to work hard to convince not just the general public but also authorities, police and politicians that art crime, particularly illicit trade in antiquities, funded organized crime and terrorism. No longer. This stance has been vindicated, unfortunately, in scores of destructive ways, most obviously through ISIS videos of iconoclasm. The only remaining questions concern the scale of the earnings from looted antiquities and what to do to stem the flow.

The most direct way to curb the looting is to discourage First World buyers from purchasing anything that is not 100 percent clearly not from recent excavations in Middle Eastern conflict zones. But while those in the art trade talk a good game, there’s profit to be had, from major galleries and online auction sites (where it is easy for a seller to hide his or her identity, difficult to be sure of an object’s provenance, and where some objects have been advertised as being still covered in desert sand, as if this were a selling point). The documentary "Blood Antiques" chillingly shows how certain Brussels art dealers, for instance, collude with actors posing as people with looted antiquities to sell, even as some still have desert sand on them.

So the need is clear to help protect surviving monuments from iconoclasts and do what we can to limit the funds for fundamentalist groups. Curbing art crime is one way to do that. The U.K. and France are among the governments that have recently dedicated tens of millions to protecting cultural heritage. The National Endowment for the Humanities in the United States recently launched a new grant for projects with that same goal. So it stands to reason that the military would reinstate officers who might be described as modern-day Monuments Men.

It is fitting that the Monuments Men 2.0 should be spearheaded by the British because they were the masterminds behind the original incarnation. The highest-profile among the officers were Americans, promoted by recent books like "Monuments Men," which focused on George Stout (whose fictional avatar was played by Clooney in his film of the same name) and my own "Stealing the Mystic Lamb," which focused on Monuments Men Robert Posey and Lincoln Kirstein. (Fictionalized versions of the latter were played by Bill Murray and Bob Balaban in the "Monuments Men"  film.

But the core of the program was British, led by Sir Leonard Woolley, a rumpled, opinionated archaeologist, a buddy of Agatha Christie and someone in desperate need of a rollicking biography, preferably penned by the master of World War II intrigue romps, Ben MacIntyre. Woolley's project has its origins in January 1943, when archaeologists Mortimer Wheeler and John Ward-Perkins visited archaeological sites like Leptis Magna in North Africa.

A team of Italian archaeologists had recently excavated the site, but the excavated objects were just left there unprotected. British soldiers were inadvertently damaging ruins without realizing that the stones were of cultural or historical importance. The two prepared homemade “out of bounds” signs to show people where to avoid treading.

Thus began a movement to educate soldiers in the field, for with knowledge of the treasures they might encounter came consideration to protect them. What Wheeler conceived was later enacted by Woolley, as part of the British War Office. But Woolley envisioned this as an advisory role not one that would actually send officers into war zones. That would be the American contribution.

Meanwhile, in the United States at the outset of World War II, a group of American museum leaders, including Paul Sachs of Harvard’s Fogg Museum and Alfred Barr of the Museum of Modern Art, drew up a list of cultural heritage objects that might be in danger in the course of the fighting on continental Europe. This list was linked to maps that were distributed to officers, along with General Dwight Eisenhower’s important directive to avoid damaging cultural sites whenever possible. There is no record of a previous general making such a statement.

While it was up to field commanders to apply it (and if the lives of humans were at stake, they took precedence over objects) and there were some major-league “oopses,” like the art-rich monastery of Monte Cassino being horribly bombed despite the fact that no Nazis were hiding in it, the principle was important.

An estimated 5 million cultural heritage objects were stolen, looted, damaged or destroyed during World War II, but the greatest treasures stolen by the Nazis and their dedicated art and archive-theft unit, the Einsatzstab Reichsleiter Rosenberg, were saved, thanks to the heroic efforts of the underfunded, underappreciated Monuments Men.

“The just-announced creation of the UK's Cultural Heritage Protection Unit, (a.k.a. the Monuments Men and Women Returned)​ is very significant," Judge Arthur Tompkins  told Salon. "This represents another tangible and practical initiative to safeguard art and culture where they are often most at risk, by way of a specialist unit which will in turn act as a strategically beneficial force-multiplier on the ground," said Tompkins, who is the author of "Art Crime and Its Prevention" and the forthcoming "Plundering Beauty: A Concise Illustrated History of Art Crime in War." "It is another piece of the mosaic which is gradually, but with increasing momentum, rebuilding and enhancing the core national and international structures of cultural protection during armed conflict."

There have been officers who have functioned as the Monuments Men did during World War II in the decades since. Italy’s Carabinieri military police have had dozens of officers from their Division for the Protection of Cultural Heritage in conflict zones for years. Colonel Matthew Bogdanos, a former U.S. Marine, was in charge of recovering objects looted from the National Museum in Baghdad during the Iraq War. Lt. Col. Timothy Purbrick, an art dealer in his civilian life, has led a cultural property protection working group in the British Army for the last two years, and the new unit will be an extension of the fine work he has done.

The U.S. Army employs archaeologists like Laurie Rush, whose role has been to train soldiers in how to respect and protect cultural heritage sites in the field. "The British initiative is good news for all of us who work with the military on issues of cultural property protection," Rush said. "I have had the added good fortune to be able to work directly with key members of the British military, like [Lt. Col.]  Purbick and my counterpart Richard Osgood, so I know that the British effort is in extremely good hands."

Rush was also behind a most coveted, not-for-sale trinket: cultural heritage protection playing cards, distributed to soldiers in the field. Each features a picture of an at-risk object or monument, so that troops can learn as they play poker.

The Association for Research into Crimes against Art (full disclosure: I’m its founder) has for years been teaching post-graduate students and professionals about protecting art. Dozens of graduates of its summer-long Postgraduate Program in Art Crime and Culture Heritage Protection have expressed interest in joining some sort of new incarnation of the Monuments Men, but opportunities have been lacking. No longer.

“While art historians, provenance experts, and criminologists might seem like unlikely war heroes, the fact that the military recognizes the need for these types of experts, to advise commanders and to work with civilian authorities after battles, is hugely important," said Lynda Albertson, CEO of the association. "As the military are planning before and during a conflict, it is important for officers in charge to think ‘what are the historically significant places we need to protect in a conflict, and how do we preserve what is damaged as a result of military necessity.’”

To that end, the Association for Research into Crimes against Art has a scholarship set aside as part of its postgraduate training program to advance the knowledge of cultural heritage experts in uniform, providing training to cultural-property-protection personnel who are working with the military at the national or multinational level. Recent scholars have come from conflict-zone countries: Iraq, Yemen and Syria.

Over the past two years, governments have finally recognized the severity of art crime, above all illicit looting and trade of antiquities and openly condemned it, dedicating impressive funding to curbing it. Now the British Army is going a step further and recruiting officers to enter the fray and help save art. It is an important step, recognizing not only that art is of great importance as the tangible relic of past and present civilizations but also because it is something to safeguard against those who would destroy or illicitly profit from it, using it a weapon in the war against terror.