Donald Trump's winner-takes-all wasteland: America will never be "great" if we continue to worship the hustle 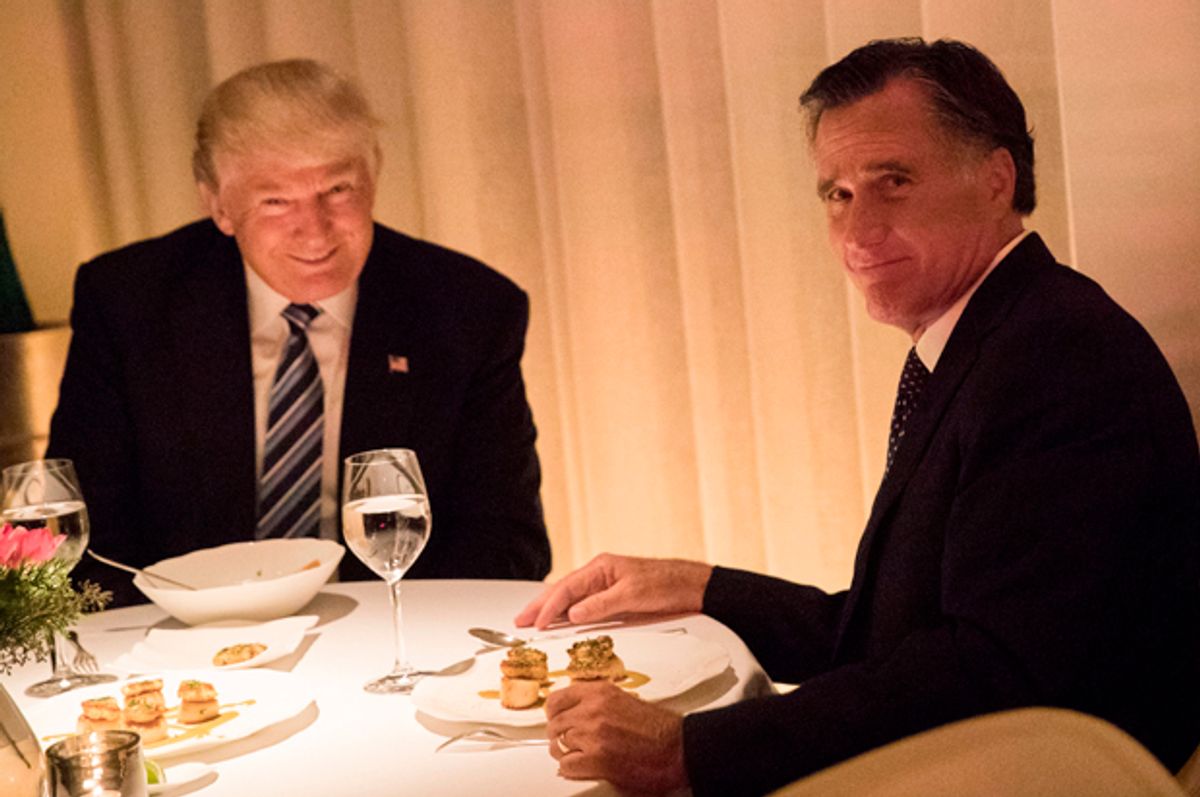 The footage of Mitt Romney speaking to reporters after his recent dinner with Donald Trump is horrific. During the presidential primary, Romney gave an impressive address to Republicans warning against the dangers of a Trump nomination. “His imagination must never be wedded to real power,” the former governor stated with conviction in the same speech in which he called the current president-elect a “phony” and “fraud.” Romney had little, if anything, to gain from the speech. In subsequent interviews, he predicted that a Trump presidency would initiate “trickle down racism” and “trickle down misogyny” throughout American politics and culture.

Now, he has status and influence to gain by crawling around on all fours at Trump’s feet. After disgracing himself at a private dinner to discuss his potential appointment as secretary of state, he made a meek attempt to offer the phony effusive praise. Romney gushed over Trump’s strength of leadership, his policy ideas and his potential to solve America’s problems. His tone of voice was weak and noncommittal -- similar to a political spouse who claims everlasting support for her husband who takes the microphone to admit guilt in a sexual scandal. His eyes kept darting toward the pavement, but the real terror came when he managed to look into the lens of the camera. The windows of his soul appeared empty. There was a deadness to his stare that should send chills down the spine of anyone contemplating a life of artificiality.

The one moment of truth in an otherwise pathetic display of insincerity came when Romney told reporters, “Trump did something I tried to do and was unsuccessful in. He won the general election.”

Much of American culture reduces everything to the measurable result. Profit, success and victory justify themselves, rendering principles such as logic, aesthetics and ethics as insignificant distractions, or in many cases, obstacles to destroy. Mitt Romney represents many Republicans who once criticized Trump as a con man, but now obediently march according to the president-elect's beat like wooden soldiers. In the words of Vincent Lombardi, “Winning isn’t everything. It’s the only thing.” The legendary coach of the Green Bay Packers expressed a workable philosophy for football games, but applied to human life, or the management of society, it acts only as an undertaker. It presides over the graveyard of lost souls, missed opportunities for fulfillment and wasted lives. One can’t help but wonder how many Americans suffer their own private, less dramatic self-inflicted wounds of the spirit visible in Romney’s vacuous eyes.

Historian, social critic and novelist Morris Berman would argue that “hustling” is not a mere element of American culture. It is its center, and definitive enterprise. Millions of Americans, according to Berman, live like Romney. He is not the exception, but a notable practitioner of what is the mainstream American way of life.

Berman taught history and sociology at a wide variety of universities throughout North American before settling into his retirement in Mexico. He is the author of a trilogy of books on American decline: "Twilight of American Culture," "Dark Ages America" and "Why America Failed." Unlike other cultural critics who identify severe pathology and dysfunction in the “last remaining superpower,” Berman does not believe that any unexpected force of social justice or political improvement will rescue the United States. A slow and steady decline is more likely, particularly because America is a “hustling culture.” Although it had and has many alternative traditions and countercultural movements, nothing can gain sufficient momentum to challenge what rests at the failing heart of American life: the pursuit of material wealth, career advancement and elevation of social status.

Berman begins "Why America Failed" with the question “What was America ultimately about?” Soon he answers his own question: “America was from the outset a business civilization. . . . Its principal goal has always been an ever-expanding economy — affluence — and endless technological innovation.” The Pulitzer Prize-winning historian Walter McDougall summarized it as a “nation of hustlers.” President Calvin Coolidge, in a rare moment of presidential honesty, once said, “The business of America is business.”

The Founding Fathers, for all their flaws, believed in republicanism and public virtue, but Berman documents and describes how even they were extraordinary men unsuccessfully trying to hold back a flood of greed and financial fixation. George Washington cautioned Americans against their “insatiable thirst for riches,” claiming that he never anticipated such a “dearth of public spirit and want of virtue.”

By 1831, the nation’s amoral center was clear to Alexis de Tocqueville, who wrote, “As one digs deeper into the national character of the Americans, one sees that they have sought the value of everything in this world only in the answer to this single question: how much money will it bring in?”

Berman posits that President Carter’s unpopular “Crisis of Confidence” speech in 1979 was the final stand of the alternative tradition. From the Oval Office, Carter attempted to rescue a nation adrift, explaining that “Human identity is no longer defined by what one does, but by what one owns… Piling up material goods cannot fill the emptiness of lives which have no confidence or purpose.”

The speech received widespread ridicule because, as Berman states, “What Carter was attempting was nothing less than a reversal of nearly four hundred years of American history.”

Now, history has marched forward to the election of the nation’s ultimate hustler to the presidency. Donald Trump, a transparently self-serving businessman with no background or interest in republicanism, will represent the United States to the entire world. More than 60 million voters overlooked his record in fraud, his bankruptcies and his grotesque character defects, because he embodies the lucrative hustle -- “the art of the deal” as he calls it in a book that is ethically and philosophically empty. Donald Trump could effectively present himself as a populist, because the worship of wealth is part of populism in America, while the contemptible “elites” include people like college professors. Most academics are hardly wealthy, but in the eyes of much of American culture, they are freeloaders who do not contribute anything of value to society. They don’t bring much money in.

Romney fell right into the pattern of hustling when he transitioned from eviscerating Trump to genuflecting toward him. Many other Republicans who called Trump “a cancer” or unqualified are now playing the same game -- one in which there are no real rules and, ultimately, there is no real point. Without any real principles, success and victory are meaningless. To try to fill a life with commercial triumph is the equivalent of pouring water into an abyss and waiting for it to seal.

Never before in American history has the country so thoroughly embraced its hustling culture in political form. Trump offers nothing more than a hustle, and it is the emptiness of what he personifies that might help explain his support.

According to the Washington Post, two-thirds of Trump voters viewed the 2016 presidential election as “America’s last chance.” Clearly, those voters are not referring to the cultural decline that Berman identifies and explicates in his trilogy. They believe that America is in decline and that “increasing diversity comes at the expense of whites,” to use the language of the poll.

The obvious poison of racial resentment aside, it is a form of insanity to believe that Trump offered the final opportunity for redemption in America. Redemption from what? According to Pew Research data, nearly nine in ten Americans enjoy a standard of living above the global middle-income standard. The United States grants more freedom to more people than at any other point in its history (this is probably a negative for most Trump voters), it has the lowest rate of people without health insurance on record -- for now -- and citizens enjoy one of the longest life expectancies ever recorded.

None of this means that America is an Edenic paradise, but to believe in Trump’s apocalyptic depiction is to lose all touch with reality. The gap in comprehension of perception and reality might result from personal projection. Many statistics and studies support Berman’s claim that many Americans, addicted to the hustle, are in pursuit of empty lives. Sociological studies show that 66 percent of Americans claim to have only one or two close friends; a Gallup poll has only 30 percent of Americans “engaged at work”; and 13 percent of Americans regularly take anti-depressant drugs.

The election of Trump might not only prove a hideous manifestation of America’s hustling culture, but also a validation of the old phrase “misery loves company.” People who pop Prozac, don’t have quality friendships and hate their jobs don’t want Barack Obama telling them that everything is fine. They want Trump telling them that the world is ending, but he can make everything “great again.”

Trump promises the dissatisfied and despondent an escape from themselves. With President Trump, no one has to question the efficacy of hustling, they only have to believe that America hasn’t hustled enough.