Love it or hate it, or love it and hate it, it's that Christmas music time of year again, and Paul McCartney abides 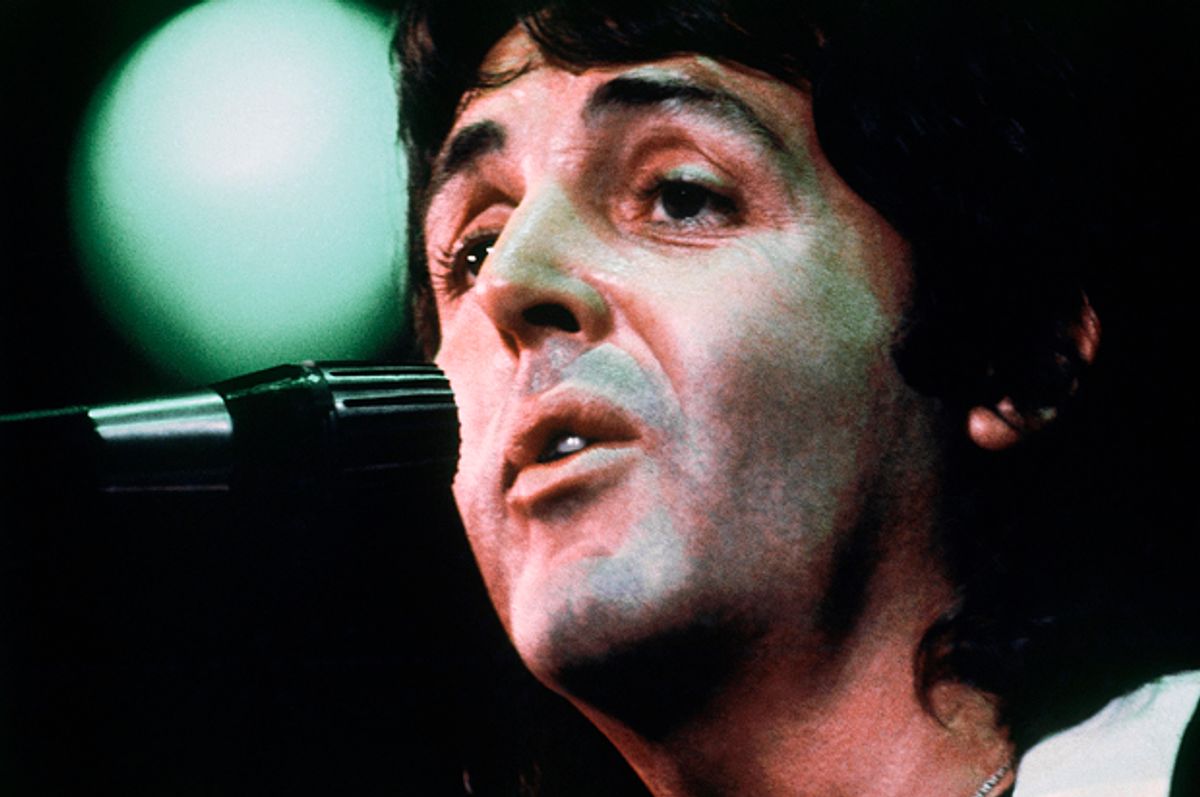 December 1 signals one of the cheeriest times of year for holiday music fans. Radio stations and retail stores flip their playlists to all-seasonal tunes, which increases the odds of hearing "Christmas Wrapping" and "Do They Know It's Christmas?" in the wild. Putting together playlists of nothing but versions of "Last Christmas" becomes a perfectly viable time-waster. Not every holiday song is a winner — for example, the modern critiques of "Baby, It's Cold Outside" are long overdue — and those who despise seasonal music are in for a long few weeks. However, festive cheer more often than not beats out Grinch-like grumbling.

The exception? Paul McCartney's 1979 solo single, "Wonderful Christmastime," which has been a critical lightning rod for decades. Based around an oscillating synth melody that lands somewhere between sinewy funk and space-age '70s rock, the song piles on sleigh bells, a slightly ragged-sounding McCartney vocal delivery, and very little lyrical substance. That last bit in particular has always rankled the song's haters. In fact, although the Beatles are generally beloved, critics have been known to tear into "Wonderful Christmastime."

College Humor recorded a video outlining in great detail "Why 'Wonderful Christmastime' Is the Worst Song Ever," while Ultimate Classic Rock was not asking a rhetorical question in its article "Does Paul McCartney’s ‘Wonderful Christmastime’ Suck?" Writer Matt Springer called the song an "abysmal seasonal horror" that was (among other negative things) "lazy, passionless and trite." A 2014 USA Today article also lambastes the song's lyrics, and compares McCartney to "the writer of an Adam Sandler movie — he can’t think of anything better, so he has all the guys just make fun of Kevin James the whole time." Jezebel, meanwhile, once wrote that the song "sounds like how it feels to be over-caffeinated and light-headed in the middle of a Macy's Black Friday sale after being awake for 24 hours."

The intense acrimony toward "Wonderful Christmastime" is somewhat of a head-scratcher. Sure, the song's certainly not as emotional or epic as "Hey Jude," "Yesterday" and "Live and Let Die." (Though what is?) And, unlike other contemporary McCartney solo songs or his work with Wings, "Wonderful Christmastime" certainly shows its age. It sounds like a 1979 single, from the slightly foggy production to the soft-glow keyboards. Those are hardly fatal flaws, however — especially considering the song arrived in the same year as Wings' "Back to the Egg," a charmingly weird LP that touched on everything from glammy disco and low-lit funk to cheesy soul. And "Wonderful Christmastime" is as nakedly sentimental as anything McCartney wrote during the '70s, a period when he churned out dozens of love songs for his beloved wife Linda.

Yet, in an abstract way, "Wonderful Christmastime" takes its cues from a different place: the minimalist synthpop bubbling up from the U.K. underground at the time. Not only did these artists incorporate new keyboard technology, but they also took a futuristic view of music construction. 1979 chart hits from Gary Numan ("Cars"), M ("Pop Muzik") and the Buggles ("Video Killed the Radio Star") prioritized how lyrics were expressed, rather than what the words meant. These songs' vocals were malleable instrumental color to enhance overall sonic expression and convey feelings such as alienation or fear of modernity.

On "Wonderful Christmastime," McCartney adopts the same tactics, albeit with a warmer approach. He trills the line "The choir of children sing their song" in a playful manner, like he's in the choir himself. At another moment, he layers his vocals in a round format, to illustrate the pealing of bells, and sings, "ding-dong, ding-dong, ding-dong." Lyrically, the refrain ("Simply, having, a wonderful Christmastime") is repeated in tandem with the song's sine wave-reminiscent backdrop. Despite its simplicity — and, some might say, absurdity — the lyric emerges as a bouncy, streamlined expression of holiday joy.

At the time, hearing McCartney adapt the tricks employed by many newer artists may have sounded jarring. In hindsight, however, "Wonderful Christmastime" is of a piece with the 1980 solo LP "McCartney II," which also embraced new sounds and styles: Talking Heads-esque squirrelly post-punk ("Coming Up"), primitive electropop ("Temporary Secretary," "Front Parlour") and experimental post-punk (the deconstructed dub finale "Darkroom"). The similarities make sense: Macca wrote "Wonderful Christmastime" during the "McCartney II" sessions, and played every instrument and note on the song himself.

"Wonderful Christmastime" also came during a time when music was ready for a change. As the '80s neared, pop and rock artists were grappling with how to navigate and embrace cutting-edge trends: disco, the roiling punk underbelly and the burgeoning new wave scene. Plus, by 1979, McCartney too was itching for a change. Although Wings toured the U.K. in the fall of that year (and even played "Wonderful Christmastime"), the band had nearly run its course. For better or for worse, McCartney was primed to take a leap of faith and dive headfirst into whatever was coming next.

Unfortunately for the song's haters, "Wonderful Christmastime" is lodged in holiday culture with cement. Artists such as Kylie Minogue, Jimmy Buffett, Chicago, Demi Lovato and The Shins have covered the song and introduced it to new audiences. McCartney himself has also extended the song's legacy by dusting off the song for solo concerts and a 2012 "Saturday Night Live" performance, and teaming up with the a cappella troupe Straight No Chaser for a 2013 cover. No wonder Forbes posited in 2010 that the song has provided McCartney with a financial windfall for years.

Going by release dates, "Wonderful Christmastime" is a bridge between his Wings output and major solo work. In a weird twist, the holiday single has also appeared on deluxe reissues of both "Back to the Egg" and "McCartney II" at different points. But it's perhaps more precise to say that "Wonderful Christmastime" represents one of McCartney's biggest post-Beatles pivot points — a low-pressure song where he reasserted his independence and started a metamorphosis that would linger for years. Sometimes, the most unexpected (and most polarizing) gestures end up being the most enduring.