So much for hope: "South Park" abandons serialization, apparently all really is lost

The National Anthem, Trump, SpaceX, trolling. "South Park" took all we had to give; it might have broken them 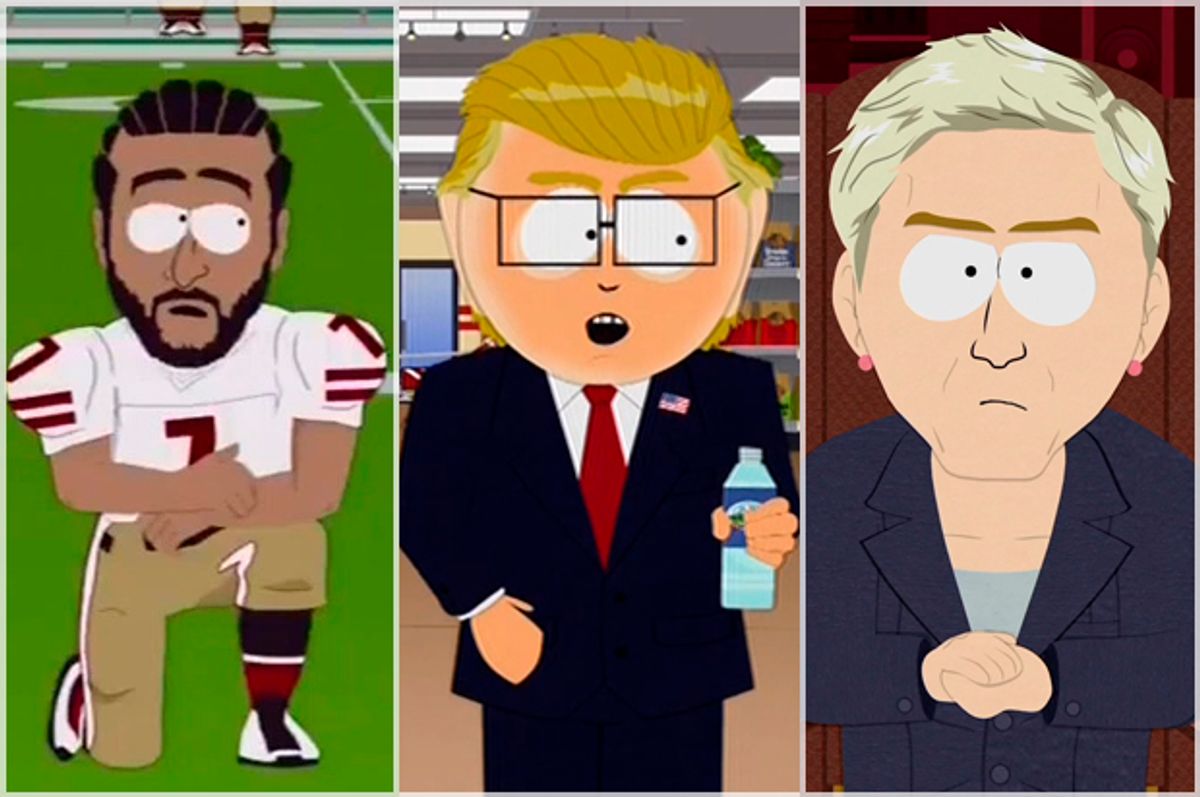 In its 19th season, “South Park” changed things up. The show went from an episodic model to a serialized one. The season-long arc centered around the changes occurring in South Park: the permeation of politically correct culture, the trendiness of claiming a LGBTQ identity, gentrification. The season began in the fall of 2015, near the outset of Donald Trump’s campaign for president. Though Trey Parker and Matt Stone, the show’s creators, likely didn’t expect Trump to win the presidency, his candidacy was both a signal and the product of a cultural inflection point in America. Perhaps Parker and Stone were bored with the repetition of the show’s first 18 seasons and wanted to challenge themselves in a new way. Or perhaps the moment was too big for one-off episodes.

Whatever the reason for the shift, Season 20, which had its finale on Thursday (titled “The End of Serialization as We Know It”), followed suit. While Season 19 explored the forces that enabled Trump’s bombast and bigotry to resonate, Season 20 explored why these forces resonated. In typical “South Park” fashion, the answers were found in absurd places. Specifically, Member Berries and online trolling.

Season 20 began in the throes of two controversies: nationally, San Francisco 49ers quarterback Colin Kaepernick’s kneeling protest during the national anthem; locally, the division of South Park Elementary’s boys and girls over the online harassment done by a troll known only as “skankhunt42,” who turned out to be Kyle’s dad Gerald.

To save the country, the U.S. government resolves to reboot the national anthem, turning to America’s foremost expert in reboots, J.J. Abrams. Abrams solves the National Anthem controversy by amending the request to stand for the National Anthem with a request to “please rise, or sit, or take a knee, in order to honor America."

Back in South Park Elementary, the children blame Cartman for the trolling; eventually, his friends take him to a cabin in the woods and kill his online presence by breaking his electronics.

Neither problem is solved so easily, though. Because Cartman wasn’t the troll, the harassment and its fallout continue: all the girls resolve to break up with their boyfriends; a heartbroken Butters leads a wieners-out salute to show solidarity against the girls; tensions build to familiar levels. And though the new anthem dumbfounds Kaepernick and other National Anthem kneelers, Abrams’s rebooting work turns out to be at the heart of the greater issue gripping the nation. An insidious nostalgia is spreading, through Member Berries, a grape-like “superfood” that squeals with sentimentality as benign as “Member the first ‘Ghostbusters’?” and as disturbing as “Member when there weren’t so many Mexicans?” Millennials’ infatuation with ’80s and ’90s culture is framed as part of the same problem as Trump’s call to “Make America great again.”

Unsurprisingly, given America’s appetite for fads and for food, the populace eats too much of this odd fruit. The result is that Mr. Garrison, who represents Trump and is referred to as “Giant Douche,” becomes irresistible in his offensiveness. The harder he tries to lose, the more support he gets.

Of course, you know what happens next. November 8th comes and IRL America actually does the unthinkable, electing the giant douche. (Has Trader Joe’s been covertly selling Member Berries this whole time?) “South Park’s" seventh episode ran the following day and Parker and Stone worked Giant Douche’s victory into the narrative. Though the show has taken some pointed shots at Trump’s stupidity (Douche doesn’t know what SpaceX is) and fragile temperament (he’s goaded into bombing the Danish by his ex-boyfriend, a decision he reverses before ordering the attack after being goaded by Kyle), ultimately Trump is framed as just one half of yet another battle between a Giant Douche and a Turd Sandwich – Hillary Clinton plays the Sandwich to his Douche. Trump is more fool than monster.

Even at this bleak moment, in which America’s most ill-equipped president is about to take office, “South Park” epitomizes George Carlin’s view of politicians. “Everybody complains about politicians,” Carlin joked in a set following the election of Richard Nixon. “Well, where do people think these politicians come from? . . . They come from American parents and American families, American homes, American schools, American churches, American businesses and American universities, and they are elected by American citizens. . .  It’s what our system produces: Garbage in, garbage out. If you have selfish, ignorant citizens, you’re going to get selfish, ignorant leaders.”

“South Park” isn’t quite as cynical as Carlin, whose conclusion to the bit was offering the slogan, “The Public Sucks. Fuck Hope.” But Parker and Stone share his disillusionment with politicians and his greater concern with the people who elect these douches and turds.

By season’s end, Parker and Stone take the various subplots to their illogical conclusions. Cartman finds love with Heidi, the only other child in the school who left the virtual world. Skankhunt’s trolling leads Danish Olympian Freja Oldengaard to commit suicide and the Danish government to subsequently set up a “Troll Trace” program that will allow any citizen to see any other citizen’s entire Internet history. Riots ensue in cities that have made use of the program. Afraid of what Heidi might find, Cartman takes her to SpaceX, hoping to start a new life on Mars. The Danish government captures America’s biggest trolls, including Gerald, in what turns out to be a plot by the Danish prime minister (who isn’t Danish) to troll the entire world in a stroke of “hilarious” self-immolation.

Gerald is aghast when the Danish prime minister reveals to him his nefarious plot. The two wind up in a battle on a high bridgeway that recalls the one between Han Solo and Darth Vader in "The Force Awakens." They argue self-referentially about where the line is between trolling and satire. “If you do some outrageous thing with a positive attitude you’re a satirist but if you’re cynical about it then you’re a nihilist?” the Danish prime minister asks. “That’s fucking ridiculous."

Gerald, speaking for the show, says, “I want to stand here and tell you that you and I are different, but it’s not true. All we’ve been doing is making excuses for being horrible people. I don’t know if you tried to teach me a lesson, but you have. I have to stand here and look at you. And all I see is a big fat reflection of myself . . .  with only one minor difference.” Gerald kicks the Danish prime minister in the groin, throws him over the ledge, and says, “Fuck you, what I do is fucking funny, bitch!” Parker and Stone, here, are at once acknowledging their culpability in contributing to the noise and outrage that led to the country’s confused state and arguing that when push comes to shove they are going to be the ones, well, shoving the bad guy — humor is an art for the good!

All the while, humanity remains at the brink of destruction. The only hope is wiping out the Troll Trace program and the only source of energy strong enough appears to be outrage. Kyle tries to implement “Trevor’s Axiom,” “a well-known equation in online trolling” that allows “one person [to] create a massive reaction on the Internet” through a complex web of trolls and sub-trolls. “It’s like the fission reaction that leads to a fusion explosion, all bringing out the worst in humanity,” a scientist explains to the new president. “Oh, that kind of sounds like how I got elected,” Giant Douche says.

Despite the massive outrage that Kyle and crew inspire, their efforts fall short. Instead, humanity turns to SpaceX, which utilizes the energy used to get man to Mars and reallocates it to rebooting the Internet. It works. Everyone is given a fresh start online. The moment insinuates that America has the potential for the extraordinary, but instead humankind wastes its intellectual bandwidth on petty disagreements and outrage.

The episode ends with Kyle voicing the moral of the story. “And so, life goes on. The end of civilization didn’t happen. A massive electric pulse completely erased the Internet. We’ve been given a second chance. A mulligan. Anything we might be ashamed of gone forever. Maybe now boys and girls can learn to respect each other again. Realize how careful our online lives have to be. Because we’ve all seen what happens when the Twitters, Facebooks and trolls decide our reality. Now that we’ve been given this second chance, it’s up to all of us to see what we do with it.”

The show cuts to a news report showing an old man on his stoop who has just sent the first email on the new Internet. He wrote his friend. And what did he say? “I showed him my dick, called him a fag.”

Okay, maybe Parker and Stone are as cynical as Carlin. The Public Sucks. Fuck hope.