Republicans worry that repealing Obamacare will lead to a cliff 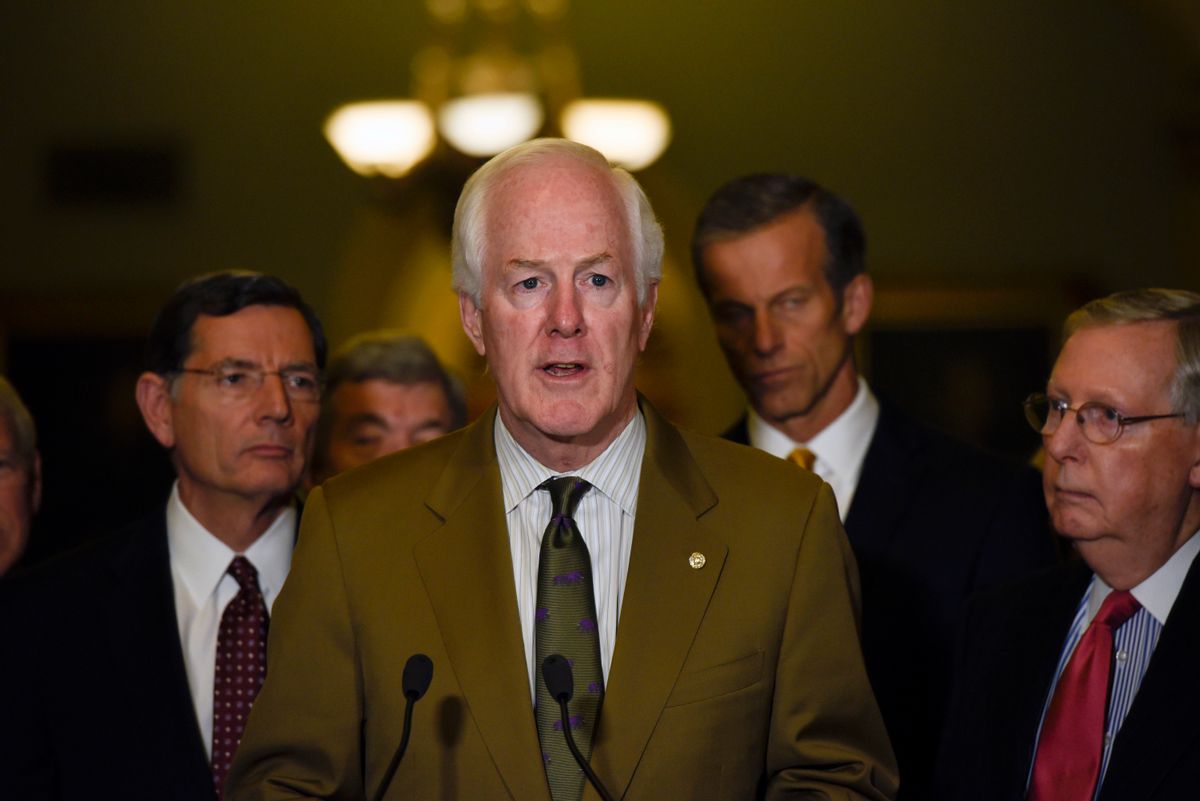 FILE- In this Dec. 6, 2016, file photo, Senate Majority Whip Sen. John Cornyn, of Texas, speaks to the media after the Republican policy luncheon on Capitol Hill in Washington. Republicans are eagerly planning initial votes next month on dismantling President Barack Obama’s health care law. Cornyn said there will likely be a three-year gap between Congress’ votes to repeal Obama’s law and when that would actually kick in. “We’re not going to let anybody fall through the cracks,” Cornyn said. (AP Photo/Sait Serkan Gurbuz, File) (Associated Press)
--

WASHINGTON — Republicans are eagerly planning initial votes next month on dismantling President Barack Obama's health care law, a cherished GOP goal. But many worry that while Congress tries to replace it, the party will face ever-angrier voters, spooked health insurers and the possibility of tumbling off a political cliff.

Republicans have said they first want to vote to unwind as much of the health care law as they can, though it wouldn't take effect for perhaps three years. That's to give them and new President Donald Trump time to write legislation constructing a new health care system — a technically and politically daunting task that has frustrated GOP attempts for unity for years.

Many congressional Republicans worry they'd be vulnerable during the transition period between a repeal vote and actually replacing Obama's law with a new system. Twenty million people now covered would face uncertainty about their future benefits, while unsettled health insurers might quickly start boosting premiums or stop selling policies in some areas to protect themselves.

In both cases, public wrath could be aimed at the party controlling the White House and Capitol — the GOP.

"It's going to be a difficult challenge to pass a replacement" for Obama's law and make sure some people don't lose coverage, Sen. Susan Collins, R-Maine, said. Health insurers will need time to adjust to a new system and if Congress waits until the last minute to enact a new law, "It's not going to work," she said.

A related fear: Congress and Trump enact legislation dismantling Obama's law but as the clock ticks down to its expiration, the GOP remains divided over replacing it. The political imperative for Republicans to pass something would be overwhelming but with Congress being Congress, there are no guarantees.

Many Republicans insist that won't happen. They view setting an end date on Obama's law as a way to force congressional action on replacing it without hurting consumers.

"There needs to be a reasonable transition period so people don't have the rug pulled out from under them," House Speaker Paul Ryan, R-Wis., told reporters last week.

But in one of many questions dividing Republicans, they differ over what a reasonable transition period means.

No. 2 Senate Republican, John Cornyn of Texas, said there will likely be a three-year gap between Congress' votes to repeal Obama's law and when that would actually kick in.

"We're not going to let anybody fall through the cracks," Cornyn said.

Other Republicans, particularly in the House, worry that three years is too long to leave voters, insurers and health care providers in suspense. Eager to prevent a drawn-out effort to pass new health care legislation from spinning into a damaging issue for the 2018 campaigns, many want the process to take a year or less.

"I hope it's not years with no replacement," said Rep. Steve Stivers, R-Ohio, who next year will head the National Republican Congressional Committee, the House GOP's political organization. "Quality matters more than speed, but speed can't be ignored. You don't want the American people to feel too uncomfortable for too long."

He said that means showing in January "not only what our vision is, but putting it in print, start passing it through committees and get some consensus with the Senate. But it is something that we need to resolve within the year."

Republicans have yet to decide what their replacement will look like.

Though details are scant, Trump and Ryan have proposed tax breaks to help people pay insurance premiums. Both want to eliminate Obama's mandate that most individuals get coverage and most employers cover workers, but that could be replaced with a requirement that people maintain "continuous" coverage or face higher premiums.

Democrats, who enacted Obama's law in 2010 over solid GOP opposition, have signaled they won't help Republicans demolish it.

"Bring it on," Sen. Chuck Schumer, D-N.Y., next year's minority leader, said of GOP repeal efforts. "They have nothing to put in its place."

Ryan and Senate Majority Leader Mitch McConnell, R-Ky., said last week that the GOP-controlled Congress plans to pass a procedural measure in January that will let Republicans push repeal legislation through the Senate later with just a simple majority.

That's important because with the Senate GOP holding a 52-48 majority next year, Democrats would otherwise be able to block a repeal bill unless it gets 60 votes.

The early procedural vote could also signal that the GOP is intent on repealing Obama's law, while saving the more difficult details for later.

They are still deciding what that part of the process will look like — and what their replacement will be.