Did Russia hack the election? Trump doesn't care — and the peril grows 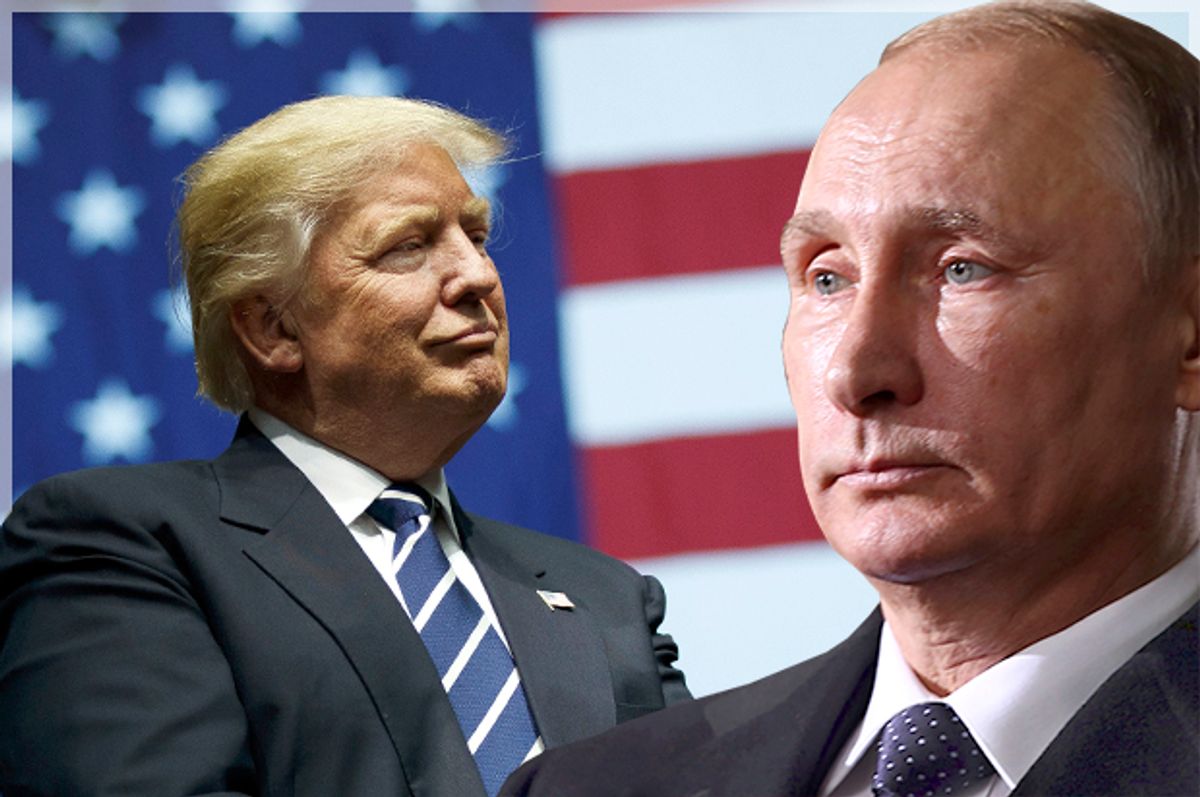 This weekend started with The Washington Post reporting that the CIA has concluded that Russia intervened in November’s election, including hacking the emails of Democratic Party officials, expressly to help Donald Trump win the White House. It closed out on Sunday night with John Bolton, who was ambassador to the United Nations under George W. Bush and is rumored to be in line for a foreign policy job under Trump, suggesting in a Fox News interview that the hack might have been a false-flag operation carried out by the Obama administration or someone in the intelligence community, with the intention of — well, who knows what.

By the time I heard that part of the interview, my mind was overwhelmed. I could only stare at Bolton’s bushy walrus mustache hypnotically wriggling above his upper lip like a caterpillar pinned alive to a corkboard. (Bolton later tried to walk back his comments about the Obama administration's culpability, telling "Fox & Friends" on Monday morning that he had meant to suggest a foreign government had perpetrated the "false flag" and chalking up any other interpretation of his comments to "bad reporting.")

As is the case with any story being told in the media by anonymous sources through leaks and counter leaks, it is difficult to know how much of what we heard this weekend is objectively true. This would hardly be the first time that rival agencies and governmental factions — in this case, the CIA and the FBI — have played out their disagreements in the pages of the nation’s major newspapers.

In sorting through the hysteria that overtook the political media over the past 48 hours, it seems to me there is one particularly important takeaway from this new revelation. Which can probably be summed up by simply saying, “We’re screwed.” But let’s look at it in a bit more detail anyway.

The reaction of Donald Trump to this news has been grotesque. From his campaign’s initial statement on Friday night to his interview with Chris Wallace on Fox News on Sunday, the racist tangerine who will soon occupy the Oval Office made it clear that any suggestion his win was a) not the most amazing, glorious, historic electoral victory ever and b) caused by anything besides millions of voters spontaneously realizing what an amazing human being he is was simply inconceivable (to say nothing of the flunkies he rolled out to support him).

Instead Trump disparaged the intelligence agencies he will soon nominally be leading, insisted he didn’t believe them and accused those who suggest that Russian hacks influenced the election of being bitter Democrats who can’t face up to the fact that they lost. For good measure, he revealed that he isn’t bothering to go to intelligence briefings because “I’m, like, a smart person.”

It would be one thing if Trump had genuine reason to disbelieve the intelligence on Russia, such an alternative assessment from another agency. There are 17 intelligence agencies (that we know of) providing services to our nation’s policymakers. Obviously those agencies will sometimes clash and offer conflicting information. But generally they will hammer out a consensus that makes its way up to Congress and the president and allows those involved with the machinery of national security to make decisions. In the case of Russian hacking, all 17 of these agencies have supposedly arrived at the same general conclusion — that the Russians played a role in subverting and sowing chaos in this year’s election.

But Trump does not have alternative information. (How could he if he doesn’t go to briefings?) He simply doesn't want to believe what he is hearing. In terms of intellectual curiosity, Trump is already making George W. Bush look like Socrates.

How are members of the nation’s intelligence community supposed to function when they have to report to a man who refuses to believe what they say, based only on his personal preference or existing prejudice? A man who has already announced that he does not believe the first significant issue they've brought to him? How useless will the people risking their lives to gather intelligence feel if the nation’s president is telling Fox's Sean Hannity that they're all a bunch of bullshit artists?

Our country has survived warfare between its intelligence apparatus and its overseers in the executive branch before. But never before have we had a president with so little regard for the spy agencies. A powerful intelligence community made up of hard-core self-described patriots, in open revolt against a president who publicly disdains it and scorns its advice, is a dangerous thing for a democracy. We may be about to find out just how dangerous.

Editor's note: This piece has been updated to reflect the fact that John Bolton made two sets of comments.