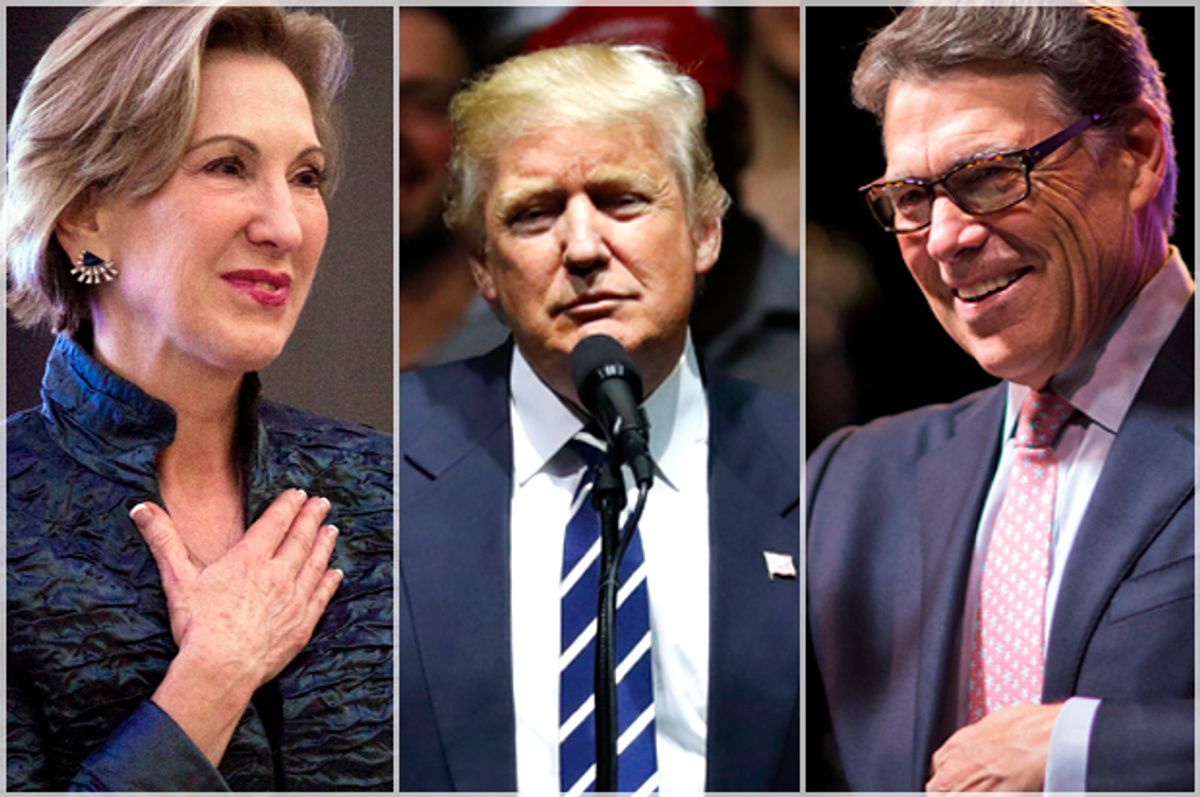 President-elect Donald Trump looks to be testing out his own team of rivals, auditioning fierce former presidential competitors Carly Fiorina and Rick Perry for pivotal positions in his incoming administration with a pair of meetings at Trump Tower.

"He has really cool stuff in his office," Fiorina told reporters after leaving Trump Tower Monday. Describing how various professional athletes had given the former "Celebrity Apprentice" host "incredible memorabilia," the woman who was attacked by the president-elect for her facial appearance remarkably said she was most impressed by the size of former NBA star Shaquille O'Neal's shoe, noting "it was huge."

"I guess it takes a champion to know a champion," she told reporters:

At Trump Tower, @CarlyFiorina says she and Trump talked about "hacking, whether it's Chinese hacking or purported Russian hacking." pic.twitter.com/b13BrjuoPj

Despite her sudden eagerness to work with Trump on "hacking, whether it's Chinese hacking or purported Russian hacking," Fiorina, a 2016 failed presidential candidate and failed vice-presidential candidate, having ever-so-briefly run as Ted Cruz’s running mate, had long been critical of Trump. "Donald Trump reminds me of the Kim Kardashian of politics. They're both famous for being famous and the media plays along," she said during a January Fox News interview:

When leaked audio of Trump boasting about groping women was published in October, Fiorina called on the GOP nominee to drop out of the race.

“Donald Trump does not represent me or my party,” she wrote at the time:

But ahead of her magnanimous visit to Trump Tower Monday, Fiorina praised Trump's recent PR deal with Carrier to not send more than 700 jobs from Indiana to Mexico in exchange for a $7 million tax break.

"[I]t was brilliant because it was a signal,” she said over the weekend, the Washington Post reported. “It was a signal to working men and women across this nation that, ‘I have your back. I have not forgotten you.’”

At the weekend retreat for Virginia Republicans, Fiorina also praised Trump for his controversial call with Taiwan President Tsai Ing-wen.

“With that phone call, President-elect Trump said [to China], ‘We are not playing by your rules,’” she said.

“One thing President-elect Trump clearly understands is this: that actually changing an ingrained, embedded status quo requires a major shock to the system,” she said. “It can’t be such a violent shock that you put the patient in cardiac arrest, but you have to have a signal strong enough that people understand change is actually coming."

To that end, it appears the president-elect may be eyeing Fiorina to lead a shake-up of the intelligence community he's gone to war with in recent days.

The former Hewlett-Packard chief executive is rumored to be Trump's pick to be the director of national intelligence, the New York Times reported Monday, citing an unnamed transition official.

“I have met Vladimir Putin," Fiorina routinely boasted on the campaign trail, referring to her 45-minute private meeting with the Russian dictator during a 2001 summit.

Fiorina's most relevant experience for the spy director position first headed by John Negroponte, however, is her top role on an advisory board to the CIA through which she gave advice on how the intelligence community could continue to carry out spying activities during the latter years of the George W. Bush administration as demand for transparency increased. Then-CIA director Michael Hayden

Then-CIA director Michael Hayden told CNN earlier this year that Fiorina “contributed a great deal,” and that her work “helped me with my judgment.” But her downplaying of U.S. intelligence assessments of Russian interference in the election in an apparent play for Trump's approval may not garner her the warmest reception amongst an intelligence community already cooling to President-elect Trump.

The DNI position was created shortly after the 9/11 attacks, and whoever occupies the role advises the president, the NSA, and the Homeland Security Council on matters pertaining to intelligence and national security. Fiorina would be the first female DNI, if selected.

Also on Monday, another former Trump rival is headed to Trump Tower for his third meeting with the president-elect.

Considered a leading candidate to head the Department of Energy, the agency he infamously argued he wanted to abolish but couldn't name during a 2011 GOP presidential debate, former Texas governor Rick Perry is set to meet with Trump after visiting with the president-elect at Saturday’s Army-Navy football game in Baltimore. Perry also traveled to Trump Tower on Nov. 21 to discuss illegal immigration and border issues.

According to the Houston Chronicle, Perry is now "said to be a top contender among four finalists to run the Department of Energy."

The Energy Department is responsible for the country's policies on energy and safety in handling nuclear material, energy conservation, research on energy, and domestic energy production.

Their determination to see the fossil fuel industry flourish in the U.S. is one of the few things the New York businessman and conservative Texan share.

During the GOP primary, however, Perry called Trump’s politics “toxic” and his 2016 candidacy a “cancer” on conservatism.

In retaliation, Trump singled out Perry for derision early on during his campaign.

“He put on glasses so people will think he’s smart. And it just doesn’t work! You know people can see through the glasses,” Trump said of Perry during a July 2015 rally.