For all his threats, Trump is seen by businesses as key ally

"I actually love calling these companies," Trump says of American businesses he pledged to help 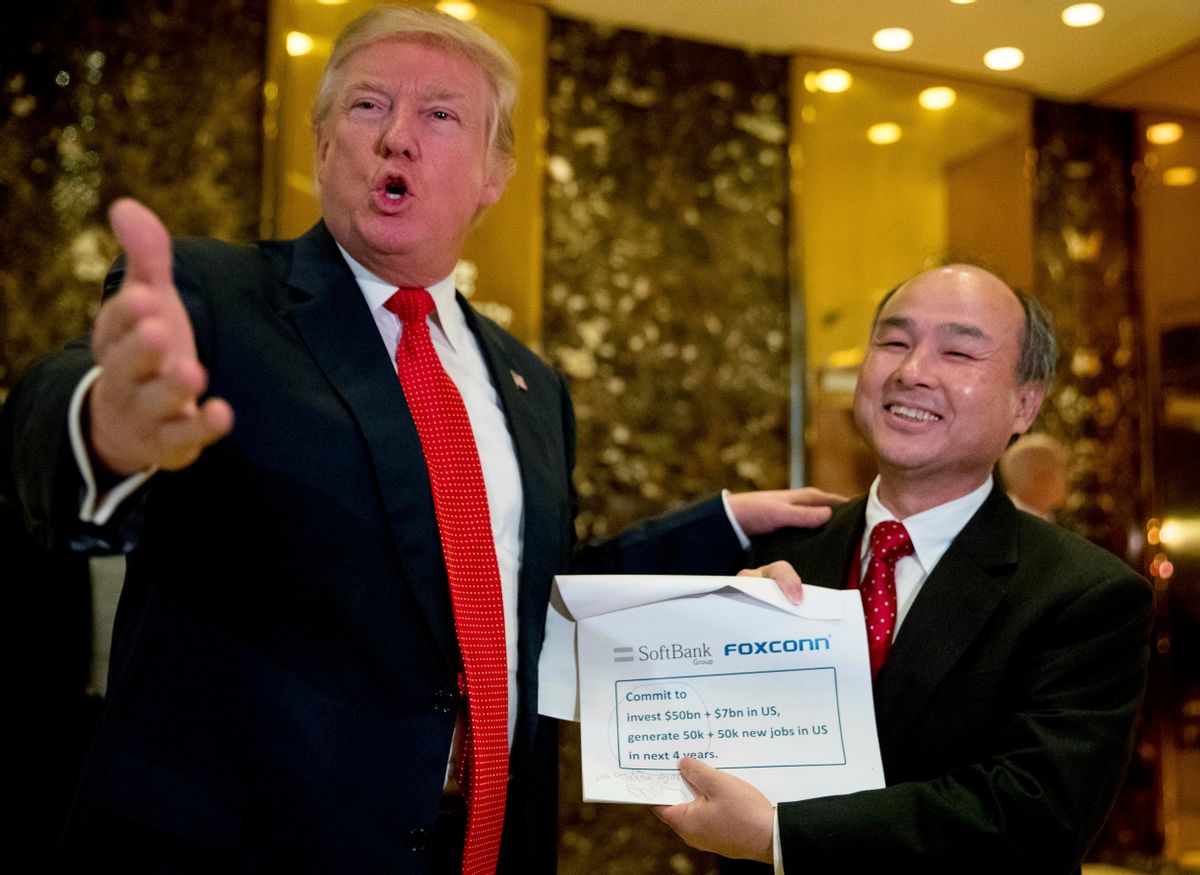 WASHINGTON — President-elect Donald Trump has lost no chance to bash or threaten individual companies that cross him.

Yet much of corporate America appears to view Trump not as an adversary but as a powerful friend. For all his bullying stance toward some companies, businesses have been cheered by his vows to slash taxes and soften Obama-era rules that were designed to protect workers, the environment and the financial system and by his choices to lead the Labor Department and Environmental Protection Agency.

The prospect of a stronger economy and richer profits is appealing enough that most businesses — and stock investors — are downplaying the uncertainties that followed Trump's presidential victory last month. The Dow Jones industrial average has rocketed 8 percent to a record high since Election Day on expectations of faster economic growth.

Many manufacturers, which have been reeling for years from shrinking demand for their goods, say they view Trump as more sympathetic to their interests than President Barack Obama was.

"When he uses the phone, he does it to tell manufacturers that he supports them and wants them to create jobs in the United States," said Jay Timmons, president of the National Association of Manufacturers. "That is a far cry from what we hear in the current administration."

The Obama administration helped bail out General Motors and Chrysler and halted a freefall in factory layoffs. But it also issued a series of environmental and labor rules that were designed to limit damage from climate change and raise pay for workers. Business-backed groups argue that such regulations have instead raised costs and depressed hiring.

The manufacturers association hosted Vice President-elect Mike Pence on Thursday and met with members of the Trump transition team on Friday. And though Trump has threatened slap a 35 percent tariff on companies that shift factory jobs abroad and then bring goods back to the United States, Timmons said didn't think that would be a priority for the president-elect.

"The first order of business is to fix the problems that have made us non-competitive," Timmons said after meeting with Pence.

Organizations representing small businesses, such as franchises for stores and restaurants, are also expressing optimism.

A businessman himself, Trump appears to relish his discussions with corporate leaders. During a speech Thursday in Des Moines, Iowa, he recounted private phone conversations he had with top executives.

And he's hardly loath to say what he wants from them.

He'd like the tech giant Apple to open its largest factory in the United States.

At his behest, Carrier announced it would keep 800 jobs at a plant in Indianapolis, though it would still send hundreds of jobs to Mexico. Trump used the prospect of tax reform to keep that Carrier plant open and later praised the chief executive of its parent company, United Technologies.

Last week, Trump talked up the Japanese mogul Masayoshi Son, who after meeting with the president-elect in New York, spotlighted his plan to invest $50 billion and create 50,000 jobs.

"He's one of the great men of industry," Trump said as he shook Son's hand in the lobby of Trump Tower before turning his back to go back up the elevator.

But in public exchanges on Twitter, Trump has been harsh toward some companies.

When he decided that Boeing was charging taxpayers too much for the next Air Force One fleet, he sent an angry tweet last week, briefly upsetting Boeing's stock price.

Several corporate leaders have downplayed Trump's outbursts, suggesting that they were part of a necessary public conversation about jobs that the president-elect has simply jumpstarted. Though unemployment is a low 4.6 percent, the sluggish pace of economic growth and wage gains have left many Americans disgruntled and anxious.

"I hope it creates a dialogue on job creation in this country at this level that we haven't seen in a long, long time," Douglas Oberhelman, chief executive of Caterpillar, said in a conference call for the Business Roundtable this week.

Oherhelman added that "while some of us may share our turn in the bull's-eye a little bit," businesses would be pleased to have states compete for manufacturing jobs through incentives and the "very aggressive pro-job creation policy" expected from the incoming administration.

Trump would cut the federal corporate tax rate to 15 percent from its top marginal rate of 35 percent. He would also let companies bring back their foreign earnings at a discounted tax rate payable over 10 years. His team has committed to generating up to $1 trillion in infrastructure projects over a decade, spurring demand for equipment, raw materials and workers.

In a speech Friday, FedEx CEO Fred Smith urged Trump to be more open to trade agreements like the Trans-Pacific Partnership. Trump has pledged to withdraw the United States from the 12-nation pact.

But Smith also opened his remarks by complimenting the team Trump is assembling. The president-elect has surrounded himself with businessmen not known to advocate for ordinary workers. His Treasury secretary nominee is Steven Mnuchin, a former Goldman Sachs executive turned hedge fund manager. Wilbur Ross, a billionaire investor, is Trump's pick to run the Commerce Department.

And during this past week, Trump named Oklahoma Attorney General Scott Pruitt as his EPA administrator, a choice seen as likely to lessen environmental regulations. Pruitt has argued that EPA rules to curb carbon emissions drive up electricity rates, undermine the nation's power grid and "create economic havoc."

Trump also chose fast-food executive Andrew Puzder to be Labor secretary. As head of a company that franchises the chains Hardee's and Carl's Jr., Puzder has opposed increases to the minimum wage as likely to force layoffs and has argued against expanding an overtime pay rule.

Trump said in the statement announcing Puzder's post, "He will save small businesses from the crushing burdens of unnecessary regulations that are stunting job growth and suppressing wages."