My life with J.J. Abrams: The moral code of the celebrity doppelgänger

When you look just like a famous person like the "Star Wars" director, you're never just yourself in public 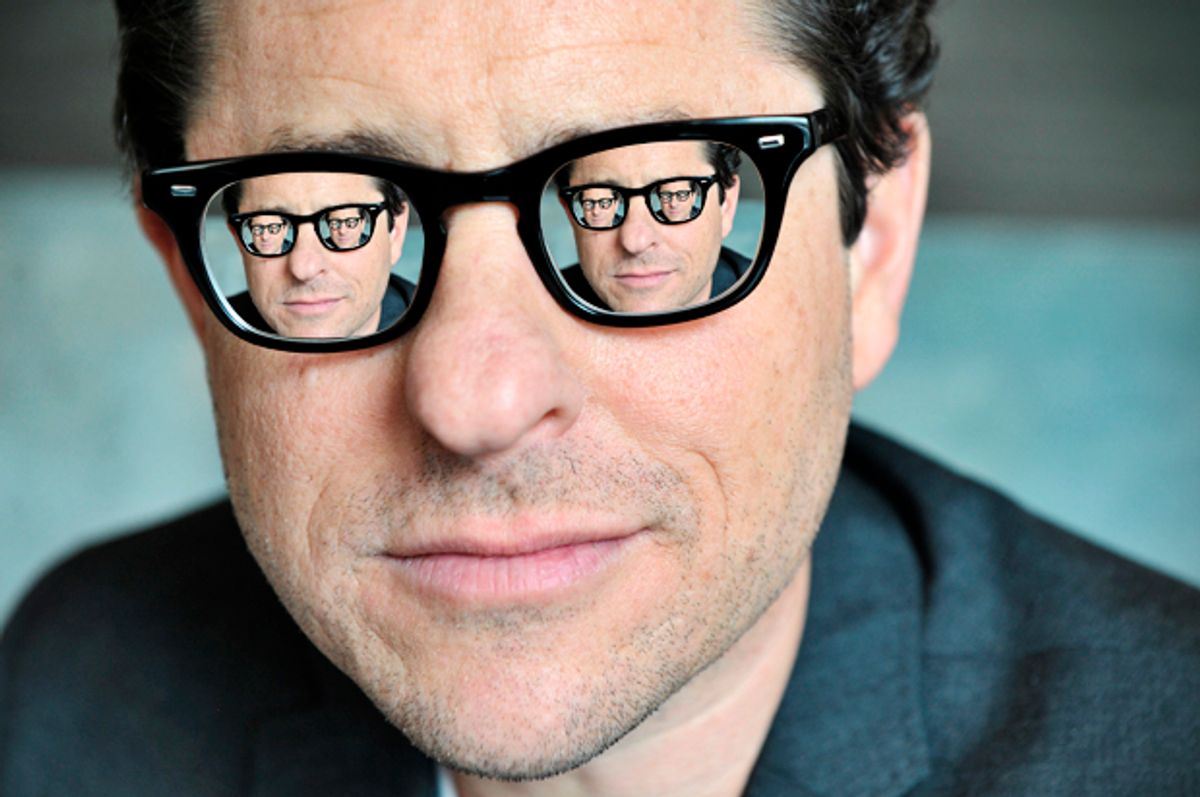 I spot it in my peripheral vision as I walk into a restaurant or coffee shop. Usually it's a subtle glance or a whisper to a friend, but occasionally a more overt, open-mouthed stare. It’s an odd sensation, to notice yourself being noticed, particularly in Los Angeles, where noticing people is the unofficial pastime. It always takes me a moment to register. Do I know this person? Have we met before? Sometimes I struggle to remember faces, let alone names. And then I realize what’s happening: they think I’m J.J. Abrams.

The whole thing started a few years ago, back when I lived in New York. A colleague asked me if anyone had ever told me that I looked like J.J. Abrams. While the name was familiar, I had to image-search him. I didn't find the results particularly flattering — his nose was more severe than mine (no small accomplishment) and he looked a bit more weathered — but the similarity was hard to deny. We have the same Brillo Pad hair, vast forehead and fondness for sturdy eyewear. It’s not an identical match, just a slight variation on the same theme. And it even appears that, like me, he struggles to smile on cue, offering the same tight-lipped, self-aware grin that I adopted as a buck-toothed teen and never outgrew.

As J.J. became synonymous with "Star Wars" and more of a household name and face, the inquiries increased. Every few weeks a barista or someone in a meeting would ask about the likeness, and I’d welcome the icebreaker. I fall somewhere between introvert and socially inept, and will happily leap past the awkwardness of small talk and into familiar conversational territory. Oftentimes these interactions would lead to enjoyable, meandering conversations with strangers — we’d bond over similar musical tastes or a mutual hatred of seasonal decoration. If only psychiatrists could prescribe famous resemblances to treat social anxiety. Maybe next season on "Black Mirror."

A little over a year ago we moved to LA for all the clichéd reasons: a better quality of life, predictable weather, less exposure to subway urine. And while all of that has been as rewarding as expected, I did not realize how much our relocation would ramp up the J.J. factor. Because out here it happens constantly — sometimes multiple times a day — and people aren’t just amused by the similarity, they actually think I am him. Unbeknownst to me at the time of our move, J.J. lives and works on the West Side, as I now do, so there is a very real chance that he could be in line at my neighborhood Whole Foods or taking his kids to the same fields for soccer practice.

Occasionally these interactions are awkward. When a 12-year-old leapt breathlessly out of a ramen restaurant to ask if he could take my picture, it broke my heart to see the disappointment in his eyes when I told him I wasn’t him (he declined my offer to take the picture anyway). And when a woman in a grocery store blocked my path, frozen in place, mouth agape, and asked “Are you J.J.?” with the sort of reverence usually reserved for single-named icons like Jesus or Bono, it felt like I had shattered her faith.

But more often we share a laugh, this bold celebrity gawker and I, while I regale him or her with tales of my often mistaken identity. I’m a veteran celebrity double by now, well versed in the routine. Some of the clerks and baristas in my usual haunts jokingly call me J.J. or Mr. Abrams, and I play along. Much like hardship, you don’t get to choose your doppelgänger, only how you handle it.

As far as celebrities go, you could do a lot worse than J.J. Sure, it’d be lovely to be mistaken for one of The Bradleys — Cooper or Pitt — but imagine looking like Scott Baio or Carrot Top? And while my wife swears that the similarity is distant at best, that I’m much more attractive, I have come to take pride in the association. I’ve met several people who either know or have worked with him — even his wife’s best friend, who stopped me in our pediatrician’s office — and they all swear by his character, that he is genuine, kind-hearted. And if that weren’t enough, he’s a major fundraiser for the Democratic Party and has produced campaign videos for Obama. Who wouldn’t be honored to be mistaken for such a mensch?

Still, I would not call myself a fan of his work, even though I can appreciate it. I only sat through a few episodes of "Lost," haven’t seen either "Cloverfield." My tastes run more toward the dark and absurd than the epic and grandiose. But "Star Wars" played a big part in my childhood, and I knew J.J. would do right by the franchise and make amends for the sins of Episodes 1-3. Sure enough, my kids and I loved "The Force Awakens," and as we left the theater, some guy did a double take and almost tripped down the steps when he saw us. He gawked as we walked by, having just spotted what he thought was J.J. enjoying an anonymous fatherhood moment, and I offered that same tight-lipped smile that my famous double might have.

This is a peculiar, somewhat creepy aspect of being a celebrity doppelgänger: You are being watched and your behavior will be noted. Like it or not, there is a certain responsibility to the position, a standard to uphold. There are surely people out there who think J.J. drives a dirty Honda, stocks up on sale items at Ralphs and scrolls through fantasy basketball articles while waiting in line. What I lack in glamor I make up for in relatability.

I have, on occasion, reluctantly impersonated him. While walking with my kids in Venice, someone rode by on a motorcycle and yelled “Hey J.J.!” and it felt wrong not to wave back. And as I was reading a book to my daughter at Brentwood Country Mart — a celebrity-spotting haven — a man walked by and simply said “J.J.” and nodded. I suppose I could have let him down, but instead I just reciprocated the nod and kept reading. Of course then my daughter was distracted, fascinated by the incident, as my children always are. Once when I was picking them up from school, a handful of kids stopped talking to stare at me, and I overheard one of them whisper, “That’s the guy who made 'Star Wars.'”

I am often asked if I have ever used the likeness for my own advantage or to gain preferential treatment. To me, this would feel like a violation of the of the doppelgänger’s moral code: You can never initiate, only react. I would surely welcome a bump in line or complimentary upgrade, but it would have to be offered first. Ethics aside, I’m conflict-averse and a terrible liar, more inclined to placate than demand.

Given our proximity and the fringe intersection of our respective circles (my puddle to his ocean), it feels that J.J and I are destined to one day come face to similar face. And while I like to imagine that we’ll grab a latte and talk for hours about narrative arc and the struggle to find hats that fit our enormous heads, if he is one quarter as awkward as I am, that awkwardness will multiply exponentially, resulting in a brief interaction that culminates in a fumbling handshake or failed bro-hug. This will of course be covertly filmed by some sci-fi fan and instantly uploaded to YouTube, with the title “J.J. Abrams meets clone droid OMG WTF?!?!”

It’s hard to be frequently mistaken for someone important without it affecting how you see yourself. When I’m in the mood for a little self-loathing, the whole thing feels like a fitting destiny, a perpetuation of my one-step-removed-ness. My sister is a famous stand-up comedian, my wife is a successful novelist and even my daughter was interviewed on "Inside Amy Schumer." As for me, I walked away from a once promising music career. I’ve worked a decade in advertising without being so much as nominated for an award. I’m reminded of the line in "The Talented Mr. Ripley" about being a fake somebody rather than a real nobody.

But then I stop feeling sorry for myself and get back to work on my novel edits or think about the pilot I plan to write after my agent sends my book out. Perhaps one day someone will actually want to buy something I write, and maybe in the meeting where it all becomes official, some executive or producer will ask about the J.J. likeness and we’ll all have a laugh. And maybe that project will gain me some small degree of notoriety — a Wikipedia page, an IMDb credit — just enough that one day J.J. Abrams will take his kids out for frozen yogurt and a stranger will approach him, nervous, a bit sheepish, and say, “Sorry to bother you, but are you Justin Feinstein?”

Justin Feinstein studied hand percussion at the Berklee College of Music and earned an MA in media studies (whatever that is) from The New School. His advertising work and humor writing have received accolades from the New York Times, BuzzFeed and Adweek. He has written about jazz for the Associated Press, covered the UFC for VICE and is currently polishing a novel. Follow him on Twitter or Instagram at @justinfeinstein.