Spy vs. spy: The CIA says Russia hacked the election to help Trump — and we know the FBI did 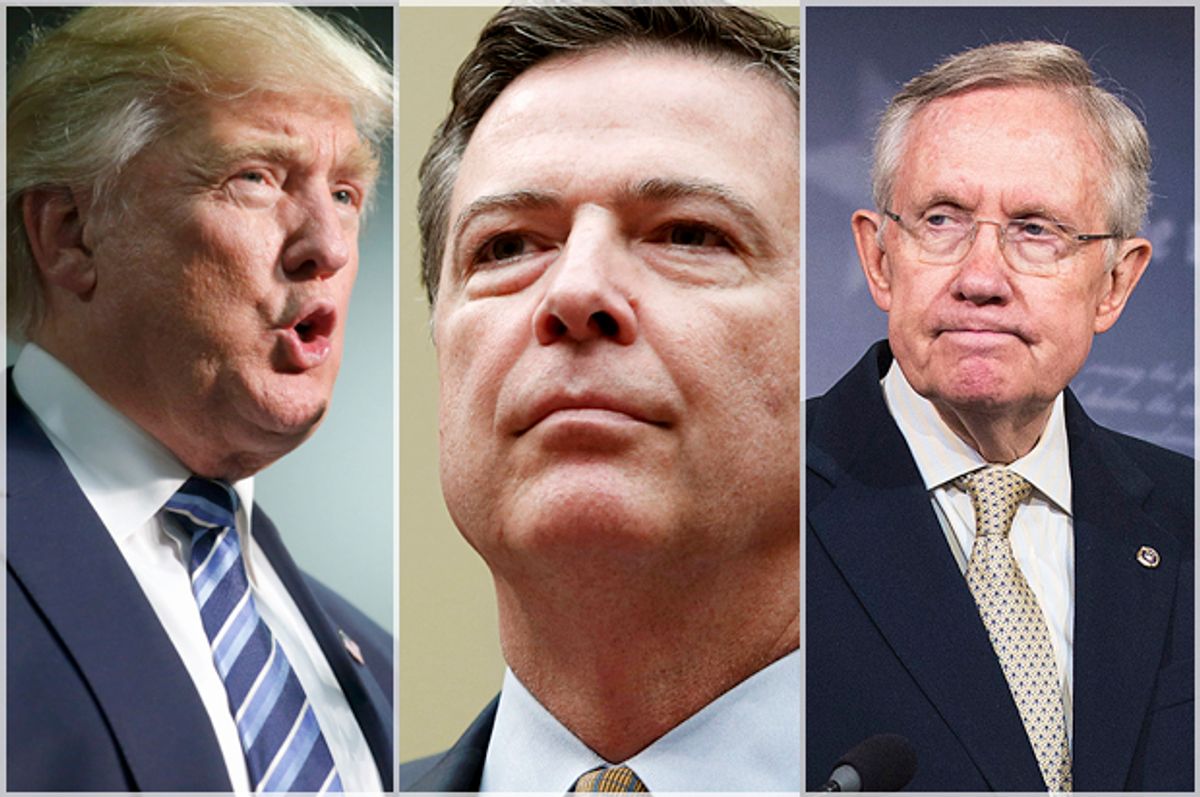 On Sunday NBC News reported that members of the intelligence community are very upset that President-elect Donald Trump has chosen to "impugn the integrity of U.S. intelligence officials," saying that it's "contrary to all that is sacred to national security professionals who work day and night to protect this country."

This was, of course, in response to Trump's dismissive comments about the intelligence community's apparent conviction that the Russian government had interfered in the election on Trump's behalf, leading President Barack Obama to order a full review of the matter to be completed before he leaves office.

On Fox News, Trump called the whole story "ridiculous," saying, "It's just another excuse. I don't believe it. Every week it's another excuse. We had a massive landslide victory, as you know, in the Electoral College." (That is a lie, obviously.) These comments were in addition to a stunning statement released by the Trump transition team that said, "These are the same people that said Saddam Hussein had weapons of mass destruction."

The CIA understandably feels that's a tad unfair, since it's now known that Vice President Dick Cheney went out to Langley in order to personally twist arms and "stovepipe" the intelligence report on Iraq.

This is shaping up to be a very bad start to the relationship between the new administration and his intelligence community. But then Republicans have been dissing CIA analyses for decades now so the agency should be used to it. From the 1950s-era Committee on the Present Danger to the 1970s Team B, national security hard-liners have often complained that the CIA was underestimating military Soviet might.

In the 1980s when intelligence analysts insisted that the Soviets were in economic and military decline and again in the 1990s and early 2000s when they warned of the rise of Islamist terrorism, the hawks always rejected their analysis. This played out most recently during the run-up to the Iraq war.

That's not to say that those on the far right are totally hostile to the CIA. They just don't like the intelligence gathering side of it. They absolutely love the covert action side of it. Trump offers a perfect example of that. Here is how he tweeted about the CIA in response to the release of the Senate torture report in 2014:

The left, it should be noted, has generally been more hostile to the assassinating, torturing, overthrowing covert side of the agency and at least neutral on the intelligence-gathering side. It's one of the great divides in our post-World War II political history.

Today we have an incoming GOP president facing off with the CIA over an an intelligence assessment concerning Russia. This time it's about possible interference in the 2016 election with intent to install this president-elect in office. which certainly puts a strange new twist on the old story. Still, the dynamics aren't all that different.

The suspicion about Russian interference in the election isn't new. It's been out there for months. What is new is the intelligence reporting that the Russian government intervened specifically on behalf of Donald Trump and not, as previously assumed, simply to wreak havoc with the election in general. This is said to be based on evidence that the Russians didn't just hack into Democrats' computers but that they hacked into Republicans' computers as well but didn't release what they found among the GOP materials. That brings another player into this latest version of the saga: the FBI.

According to former RNC head Reince Priebus, now Trump's head of staff, after the Democratic National Committee was hacked, the FBI thoroughly checked the GOP's computers and gave them a clean bill of health, saying they had not been hacked by anyone. That does not refute the intelligence community's claim, of course. But it does raise the question of why the Russians hacked only the Democrats' computers if they weren't playing favorites. Nonetheless, The Washington Post reported that the FBI told lawmakers who had been previously briefed by the CIA that they weren't so sure about any of this:

The competing messages, according to officials in attendance, also reflect cultural differences between the FBI and the CIA. The bureau, true to its law enforcement roots, wants facts and tangible evidence to prove something beyond all reasonable doubt. The CIA is more comfortable drawing inferences from behavior.

Hillary Clinton was undoubtedly amused to read that the FBI is uncomfortable "drawing inferences from behavior." James Comey, the FBI's director, certainly didn't have a problem with doing so in her case.

This points to a turf war between the FBI and CIA, which is also not unprecedented. But this time there is something potentially very troubling about the dispute. We will likely never know whether alleged Russian involvement in the election played a definitive role in the outcome, even if it's proved to have happened and was intended to help the man who won. But we do know that the FBI interfered in the election and that its interference helped Donald Trump.

Two weeks before the election, FBI agents were leaking like sieves and suggesting that their supposed investigation into the Clinton Foundation investigation was heating up. They even got Fox News' Bret Baier into trouble for saying that an indictment was imminent. Trump loyalist Rudy Giuliani hinted broadly that his old law enforcement pals were feeding him information.

And then there was the Comey letter.

Whatever else may have contributed to Trump's narrow electoral victory, there is simply no doubt that that the letter made the difference. Nate Silver of FiveThirtyEight crunched the numbers and concluded the following:

According to The Washington Post, sometime after mid-September Comey was among those sent to brief authorized members of Congress on the potential foreign interference, in an effort to prompt congressional leaders to issue a bipartisan statement before the election. The Republicans refused, and Senate Majority Leader Mitch McConnell reportedly said that if the information became public he would claim that it was an act of partisan politics.

Comey undoubtedly knew that FBI agents were engaged in unauthorized leaks against Clinton with the obvious intent to affect the election. Comey was aware of all the evidence that Russian agents had hacked Democratic emails to try to influence the election and he kept it quiet, just as the Republicans demanded. And yet, 10 days before the election, Comey sent his infamous letter, which we know for a fact affected the outcome of the election.

Sen. Harry Reid, who is retiring as the Senate's Democratic leader and had earlier sent a sharp letter, pulled no punches over the weekend: "There is no question, Comey knew and deliberately kept this info a secret," Reid said. "He has let the country down for partisan purposes and that’s why I call him the new J. Edgar Hoover."

Reid is right. It is very hard to escape the conclusion that Comey knew exactly what he was doing. If the Russians didn't give us Trump, the FBI director did.