Alex Jones in wonderland: A shameless conspiracy theorist takes on a real conspiracy 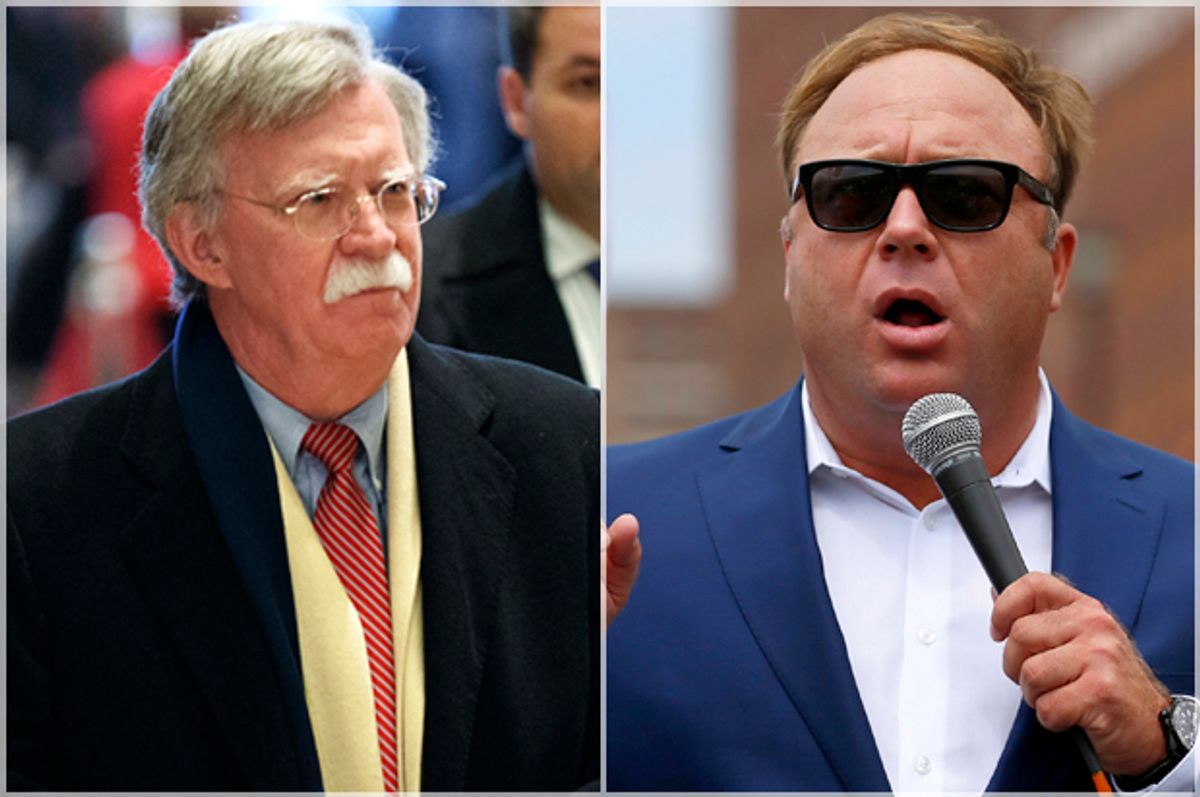 The atmosphere inside the Alex Jones InfoWars universe must feel palpably strange — stranger than usual, that is. For the first time in his checkered career as a one-man BS factory, Jones is faced with the prospects of a friendly government of his own choosing inside the White House.

Previously, Jones had positioned himself as a voice of the unapologetically paranoid and disenfranchised, crusading against the evil United States government and its myriad plots to control its people through nefarious and, if you believe Jones, outlandish means. But now, as one of Donald Trump's most prominent and powerful media surrogates, Jones will have no choice but to abandon some of his most cherished theories. His candidate is on the verge of running the globalist cabal.

Jones has theorized, for example, that the president has access to weather weapons capable of not only creating tornadoes but also moving them around, on demand. It's also possible that these so-called weapons were used in Oklahoma, circa May 2013, to deliberately murder dozens of citizens — you know, with a tornado. If the government wanted to annihilate a population of citizens, there are easier and more subtle ways to do it than literally creating a massive tornado. But sure, weaponized tornadoes. Fine.

This is what Jones said on his radio show when a caller asked him whether the Oklahoma super tornado was "artificial" and "man-made" due to "technology." As soon as the caller, who seemed to be suffering from severe paranoid delusions, ended her rant, Jones launched into his own paranoid rant, which included, as it always does, a random string of official names of organizations potentially involved — because that sounds official and therefore authentic. Oh, and by the way, not only can the president control a tornado, he can also manipulate “groups of tornadoes,” according to Jones.

"I don't know if this was a weather weapon or not," Jones insisted, "But they can, with the right conditions — they can create and steer groups of tornadoes." He added, "The question is, were their helicopters and small aircraft seen . . . in and around the clouds, spraying and doing things. If you saw that, you better bet your bottom dollar they did this, but who knows if they did. You know, that's the thing, we don't know."

And now, it'll be Donald Trump who gets to drive the tornadoes using the "small aircraft" to spray and do things. Except that Alex Jones is a Trump supporter. So what happens to the tiny helicopters? What happens to the false-flag operations? Will Alex Jones suddenly shift gears and support such (totally made-up) weapons now that it's Trump at the helm?

For the answer, we only need to look at Jones' reaction to the bombshell story in Friday's Washington Post alleging that Russian intelligence, likely the military intelligence service known as the GRU, deliberately manipulated the election in support of Donald Trump. This story has tossed the entire election into question and further delegitimized Trump's already dubious victory.

On Monday, Jones tweeted the following reaction to the story, completely without irony.

So, suddenly Alex Jones is interested in formerly superfluous things like evidence and substantiation. It's a bizarre turn of events, given that Jones has no evidence for any of his theories outside of what the voices tell him. Even with his ludicrous weather-weapons theory about Obama moving "groups of tornadoes" using tiny aircraft, Jones added a standard caveat: "Who knows if they did?" And "You know, that's the thing; we don't know." So why is Jones backstopping the new head of the government by criticizing the apparent lack of evidence in the Russia hacking story?

It's possible, according to The Washington Post's sources inside the intelligence community as well as the assessment of all 17 heads of that community, that Russia commandeered the election in order to install Donald Trump as president, chiefly by hacking Democratic servers and using the information to manipulate U.S. news media as well as millions of gullible voters who accepted the content of the hacks at face value.

In reaction to this egregious trespass against American sovereignty, Jones seems like the first guy who would jump all over the story as solid evidence of an Illuminati conspiracy to install a handpicked despot who, by the way, will greatly augment the police state that Jones claims to despise. Instead, Jones appears to accept as total on the level the incoming president's claims that there's no hard evidence to back up the Russia story, as if Jones ever required hard evidence for anything.

Meanwhile, Jones reported on his Monday broadcast that "rogue CIA" folks are trying to overturn the result of the election. His evidence? Zero. Nothing. It's obviously another theory without any acts to back it up not unlike his theory that the Sandy Hook school attack and the Boston Marathon bombing were false flags orchestrated by Obama and his White House goons and that the children who were killed at the Sandy Hook school never existed.

Now it seems that "false flag" operations will be used against Jones' beloved government rather than by it. We can expect to hear more about the overused false flag theory from Jones and his disciples any second now, especially since former Bush-era U.N. ambassador John Bolton floated it on Sunday (before walking it back).

Since Election Day, it's been obvious that Jones' roster of conspiracy theories will be rejiggered and recycled with a twist: Instead of the government using weather weapons or, for that matter, chemtrails, the anti-government opposition will suddenly control the tornadoes and other covert mechanisms against Trump and his supporters. Within the feeble, brainwashed minds of Jones' loyal listeners, this is entirely feasible. Oh, and we can add to the mix that Jones has loudly been redefining "fake news" to mean all of what's produced by traditional media outlets — basically any reporting or commentary that doesn't echo his outrageous theories.

We're in the midst of a treacherous time for the American experiment. Reality is being called into question, as is the veracity of our electoral process. Sadly, with the Kremlin's possibly handpicked chief executive, who's too busy tweeting to pay attention to intelligence briefings, we're less tethered to facts than ever before This untethering — this uncertainty about what's real and what's fake — will be used to cover up an extensive roster of crimes and misdemeanors.