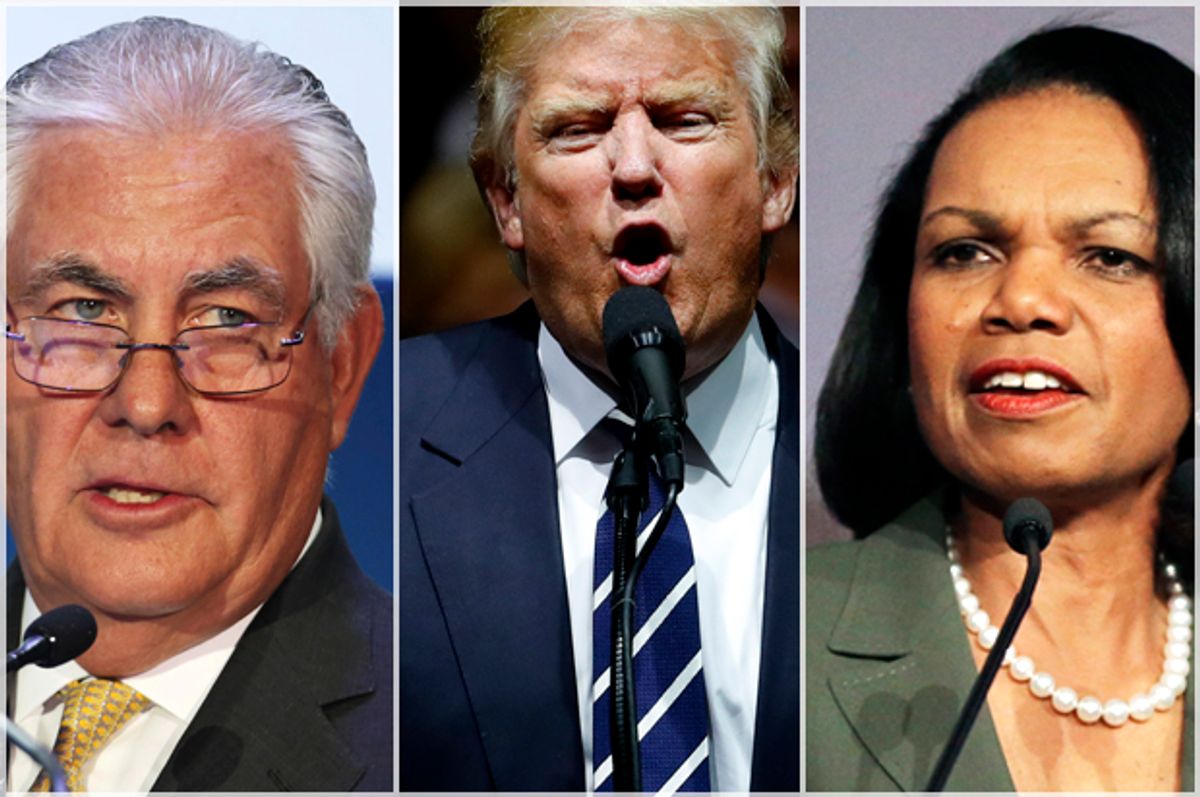 Late Monday, President-elect Donald Trump's transition team quietly announced that it was postponing his first post-election conference, meant to address potential conflicts of interests for the incoming commander-in-chief. Then early Tuesday, Trump announced his selection of Exxon CEO Rex Tillerson as Secretary of State and lined up former Republican government officials with ties to ExxonMobil and Russia's state-run gas companies to vouch for the career oil man with no experience in government. Trump then met with Kanye West at Trump Tower to the delight of the gathered cameras.

Despite his plans to divert the focus away from yet another massive appearance of conflict, several prominent Senate Republicans were quick to express concern over the choice of Tillerson, who was awarded the Order of Friendship by Russian President Vladimir Putin in 2013:

"I am concerned about his relationship with Vladimir Putin. [Putin] is a thug, a murderer, a KGB guy who only wants to restore the Russian empire," Arizona Republican Senator John McCain added of Tillerson on Fox News Monday.

Still, at least one Senate Republican who had previously been critical of Trump appeared swayed by the big Republican names who recommended Tillerson for the top diplomatic position, many of whom are the establishment Republicans Trump often criticized while on the campaign trail:

Condoleezza Rice, secretary of state for George W. Bush from 2005 to 2009, issued a statement applauding Tillerson Tuesday morning. Rice wrote that she believes Tillerson “will represent the interests and the values of the United States with resolve and commitment”:

Robert Gates, who served as secretary of defense under President Obama and President George W. Bush, strongly endorsed Tillerson in a statement Tuesday morning, calling him “a global champion of the best values of our country” and saying he would bring “vast knowledge, experience and success in dealing with dozens of governments and leaders in every corner of the world.”

Left unsaid in both statements from Rice and Gates, however, is that both have worked for Tillerson as consultants. ExxonMobil is a client of Gates' and Rice joint consulting firm, RiceHadleyGates LLC.

Rice and Gates’ business partner, former national security adviser in the Bush Administration Stephen Hadley, has advised ExxonMobil since at least 2011, according to Iraq Oil Report, a website that tracks the country’s petroleum industry. The report details how deals Exxon struck with the semi-autonomous Kurdistan Regional Government (KRG) in October 2011 amid territorial disputes with the Iraqi government created problems both for Exxon and the United States.

And MSNBC reported that Tillerson, who worked on a $500 billion deal Exxon struck with Russia in 2011 that provided access to huge oil resources in the Russian Arctic, came highly recommend by former George H.W. Bush Secretary of State James Baker. But as Politico reported, Baker is a partner at a law firm that has represented Exxon as well as Gazprom, the Russian state gas company. Baker's firm even represents another Russian state-owned oil company that faced U.S. imposed sanctions after Putin's annexation of Crimea in 2014.

For his part, Trump's pick to run the State Department now voiced his opposition to U.S. sanctions against Russia, while flouting diplomatic custom, by attending the World Petroleum Congress meeting in Moscow in 2014.