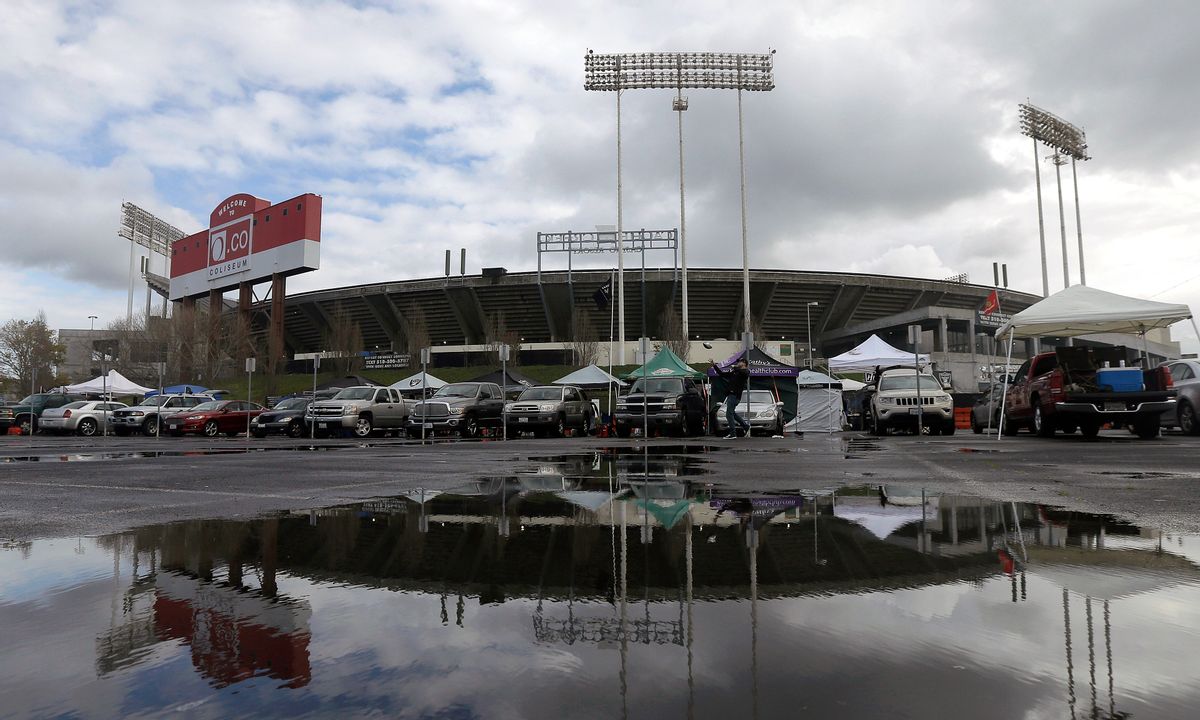 OAKLAND, Calif. (AP) — A hearing to consider a new $1.3 billion stadium for the Oakland Raiders is underway at the Alameda County Board of Supervisors.

Hall of Famer Ronnie Lott said before the hearing that he hopes the county and the Oakland City Council approve so they can start negotiating a formal agreement for a stadium project that includes $350 million in public money by way of land and future revenue.

"Right now we're in an opportunity to do something that a lot of people didn't even think we could do," Lott said.

Earlier this year, team owner Mark Davis committed to moving the Raiders to Las Vegas, where a $1.9 billion stadium project has been approved. Oakland Mayor Libby Schaaf vowed to continue working on a counter-proposal for the Raiders to stay at the Oakland Coliseum.

"If we don't do this, we have no shot. It's game over," said Jim Zelinski, co-founder of Save Oakland Sports, a nonprofit organization seeking to keep the Raiders and other professional sports teams in the city.

A move to Nevada is not certain, although a vote by the NFL on whether to allow the move is possible as soon as January. Nevada will raise $750 million from a hotel tax to fund the stadium with billionaire casino mogul Sheldon Adelson contributing $650 million and the Raiders and NFL kicking in $500 million. The Raiders must get approval from 24 of the 32 NFL owners to move.

The Raiders also have the option of moving to the Los Angeles area, where they could share a facility with the recently relocated Rams.

In Oakland, approval from the city and county Tuesday would allow negotiations to begin with an investors' group managed by Lott and the Fortress Investment Group.

"We know there is a lot of work left to do, but we also believe strongly in our city and that the Raiders belong here in the original home of the Raider Nation," Oakland Councilmember Larry Reid said in a statement issued last week, announcing the plan.

The parties have identified $1.25 billion in potential financing for a project that may cost upward of $1.3 billion for a 55,000-seat stadium that could include mixed-use retail in the future.

Lott's group would contribute $400 million, with the NFL and the Raiders contributing $500 million.

The city of Oakland would contribute $200 million for infrastructure such as storm drains and roadway parking. The money would be generated from bonds paid back from revenue created from the stadium and its surrounding commercial development.

The city and county would also contribute at least 100 acres of land, valued at $150 million. One of the issues to be determined, assistant city administrator Claudia Cappio said, is whether the land would be sold or leased.

Alameda County and Oakland also need to determine how to retire nearly $100 million in debt incurred for remodeling the current stadium to woo the team back from Los Angeles in 1995.

Fan support for a new stadium appeared to be high. The Oakland Coliseum, which also hosts the MLB's Oakland Athletics, is aging and lacks the amenities found in newer stadiums.

Shawn Wilson, chief of staff to Alameda County Supervisor Scott Haggerty, said in an email Monday that the office has received nearly 340 calls and emails in support and one in opposition.

Investors would start working with Davis and the NFL once the boards sign off Tuesday, said Sam Singer, a spokesman for investors.