WATCH: Obama tells Trevor Noah that without intelligence briefings "you are flying blind"

"None of this should be a big surprise," Obama said about Russian hacking in a "Daily Show" extended interview 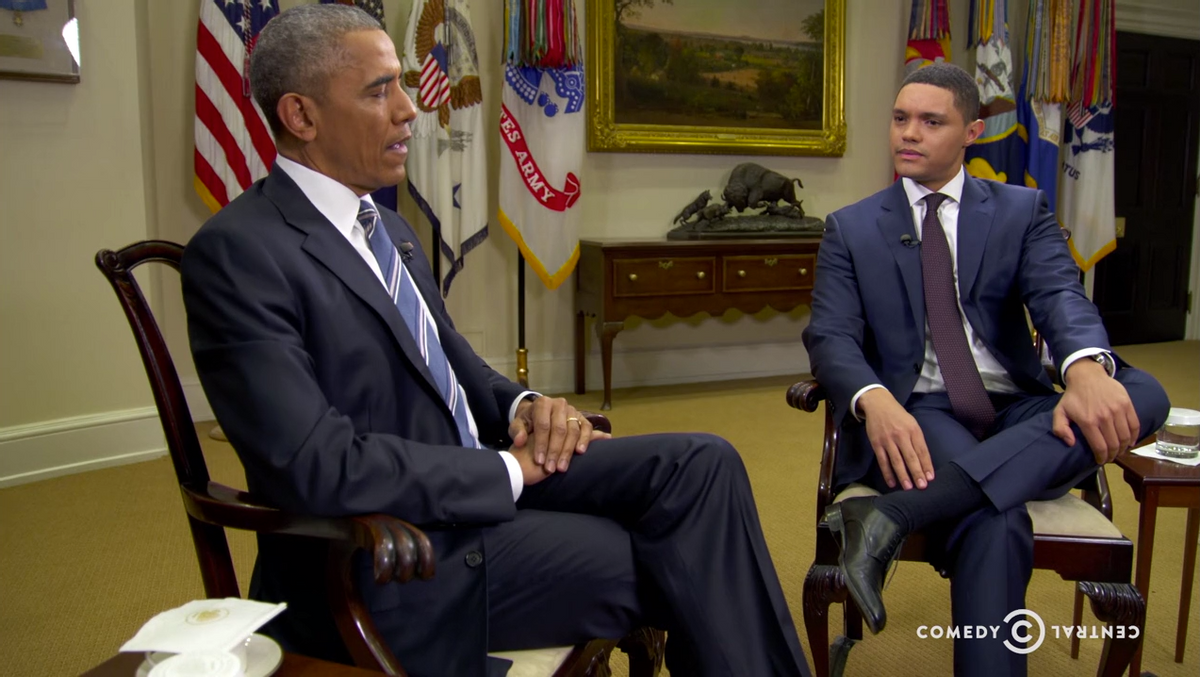 "The Daily Show" host Trevor Noah talked with President Barack Obama at the White House in an interview that aired Monday in which the president talked about issues from Russian hacking to race relations and climate change. The interview comes after the president called for a "deep dive" investigation of Russian interference in the 2016 election on Frida. Obama commented that without a daily intelligence briefing, President-elect Donald Trump would be "flying blind."

“If you’re not getting their perspective — their detailed perspectives — then you are flying blind,” Obama said about receiving briefings fromUnited States intelligence agencies.

"I'm, like, a smart person. I don't have to be told the same thing in the same words every single day for the next eight years," Trump told Fox News's Chris Matthews on Sunday. "I don't need that. But I do say, 'If something should change, let us know.'" Trump also said that Pence and his generals are updated through intelligence briefings.

"It's a big, complicated world. It doesn't matter how smart you are," Obama said, "you have to have the best information possible to make the best decisions possible."

Can you imagine if the election results were the opposite and WE tried to play the Russia/CIA card. It would be called conspiracy theory!

The president encouraged viewers to sign up for Obamacare before the January 31 deadline for enrollment. Even if the Trump administration moves to repeal the Affordable Care Act, the president added that having a year of healthcare is better than not having healthcare at all. President Obama also talked about the presence of racial issues and the reality of climate change causing flooding and eating away at shorelines.

He opened up to Noah about how he thinks race has permeated his presidency, and how he tries to point out race issues "diplomatically."

"There may be times where you just have to call things out and name names, but the challenge we face today when it comes to race is rarely the overt Klansman-style racism, and typically has more to do with the fact that people got other stuff they want to talk about, and it’s sort of uncomfortable," said the president.

"On all of these issues, reality doesn't go away," the president said about climate change, noting that change of policy does not mean that the issue just disappears.

Trump announced that Oklahoma Attorney General Scott Pruitt would head the EPA last week, and is will choose Representative Cathy McMorris Rodgers to head the Department of the Interior. Both are climate change deniers. The Sierra Club compared the appointment of Pruitt to the EPA to putting an arsonist in charge of fighting fires.

"It's not my intention to be, I think I've said this before, the old guy at the bar who's kind of just hanging on," Obama said. The president stood true to his policies and positions about Obamacare, race relations, and climate change initiatives, but acknowledged that he wanted to give the new administration space.

"I'll be paying attention. I'll still be a citizen of this country I love deeply," he said.