Donald Trump tweets and investors cringe — but some make money 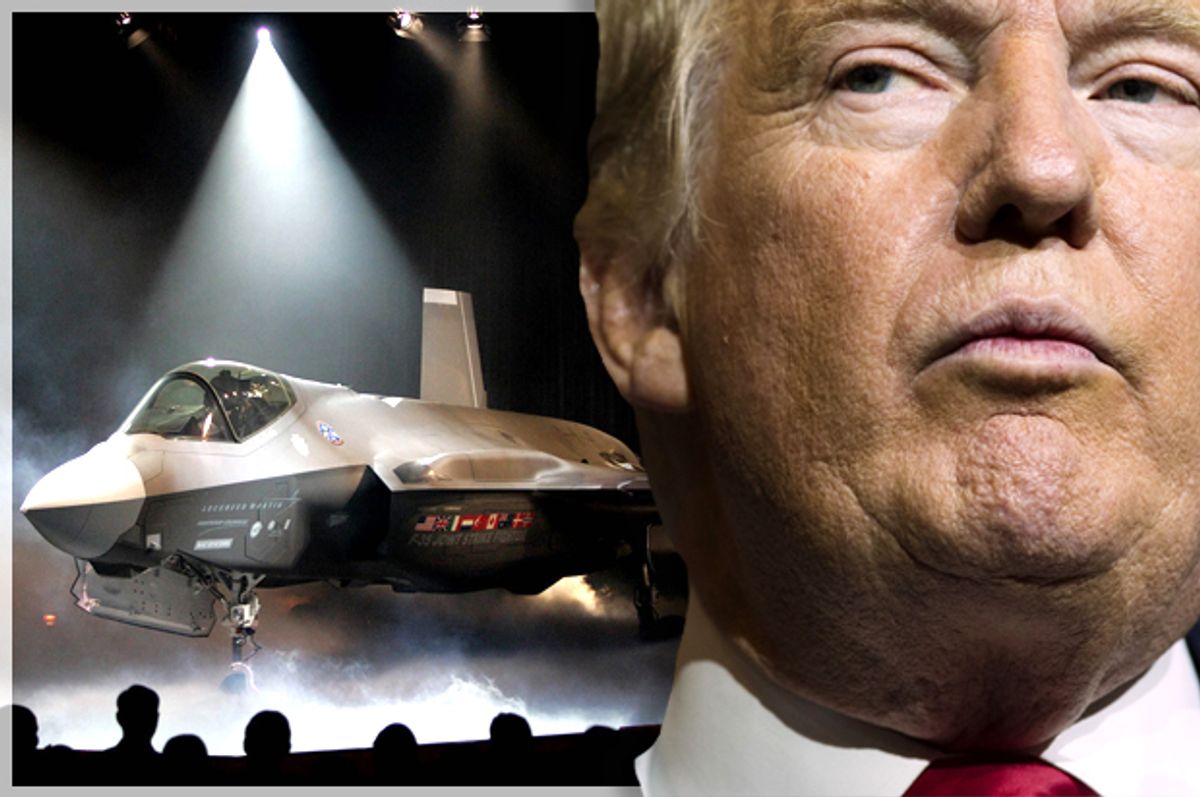 Phil Davis loves when Donald Trump lobs Twitter bombs at publicly traded companies. After the president-elect posted an early-morning tweet on Monday lambasting the out-of-control cost of the F-35 advanced fighter jet program and pledged to save billions of dollars on military purchases, Davis immediately placed a bet against the Dow Jones Industrial Average.

While most of America was still asleep, the founder and CEO of stock and options trading site Phil’s Stock World offered $500 futures contracts to buyers who believed the bluechip index was moving in an upward direction on Monday morning.

Davis figured Trump’s tweet, which posted at 5:26 a.m. Eastern time, would not only push down the stock price of aerospace company Lockheed Martin, the company behind the F-35 program, but it would also weigh on stocks of other military contractors, including Dow components Boeing, United Technologies and General Electric.

Sure enough, the Dow wavered in the hours between Trump publishing his tweet and the ringing of the opening bell in New York. In this rapid-fire world of overnight stock futures trading, buyers and sellers can bet on the direction an index is moving almost in real time, potentially earning profits or losses within seconds. Davis wouldn’t say how much he made for his clients by shorting the Dow on Monday morning, but he claimed it was "a lot."

“Most people can’t trade off that kind of information,” Davis told Salon. “If Trump tweets out early in the morning he’s doing a great favor for the people in the top one percent because we can all jump in and trade the stock futures."

Despite making money off of Trump’s message, Davis said the president-elect’s practice of using social media as a cudgel and a negotiating tactic against American corporations could do more harm overall than good.

Trump’s habit of using Twitter to rail against specific companies began on the campaign trail when he lashed out in speeches and on Twitter at Ford Motor, snack maker Nabisco and air conditioner manufacturer Carrier for outsourcing jobs to Mexico. This month alone, Trump has used social media to lambast Lockheed Martin for the massively expensive F-35 program and Boeing for its multi-billion contract to build the next two presidential jets. Trump said last week the Boeing contract should be cancelled and renegotiated, which sent Boeing’s share price down about 1 percent in premarket trading. Lockheed Martin lost about 4 percent on Monday, wiping out $2 billion in market valuation, following Trump’s tweet.

“This lack of restraint is unprecedented,” Davis told Salon. “Presidents negotiate behind the scenes in good faith, they don’t harangue American companies."

"Could you imagine [German Chancellor] Angela Merkel saying Airbus planes are ridiculously overpriced and her government isn’t going to buy any more of them? What does that say about Airbus to the rest of the world? You have to think about how these statements are taken overseas,” he added.

To be clear, some of the companies in question have long been targets of criticism for reaping immense bounties from America’s enormous defense budget. Last year defense spending gobbled up nearly $600 billion of taxpayer money, more than half of the federal government’s $1.1 trillion in discretionary spending for 2015. Critics, from progressive peacenik organizations to military hawk Sen. John McCain, R-Ariz.,say the Pentagon needs to be more restrained.

But Trump’s practice of issuing targeted strikes against specific companies doesn't have to be isolated to government defense contractors, because there’s no law against it. Nothing would stop Trump from using his Twitter-based bully pulpit against companies — or individuals — that he takes personal umbrage with.

Adam Ritt, a spokesman for the 65-year-old nonprofit investment education group Better Investing, told Salon this is just another reason for everyday investors to focus on their long term objectives and to ignore the fits and spurts of the marketplace.

“This is all part of the noise of Wall Street," said Ritt. "The government has a lot of power to make industries and companies more or less competitive. And this is another reason why the retail investor is best served by investing in stock for the long term.”

For buy-and-hold investors, Trump’s Twitter bombs targeting publicly listed companies are not nearly as important as what the federal government itself actually does that could impact companies or industries for years to come, such as regulatory action against large pharmaceutical companies or shifts in trade policy that hurt or help American companies that earn profits overseas.

Davis said the biggest threat from Trump’s use of bullying tactics isn't his ability to harm a company’s reputation with consumers, it's the possibility of the fall-out from his tweets hurting corporate America’s reputation with foreign governments. For example, Boeing and its U.S.-based workers depend on smooth trade ties with China in order to sell planes in the fastest growing commercial aviation market. Any presidential rant that upends the delicate relationship between these world powers could damage an entire industry’s global trade activity.

Trump isn’t president yet, so it’s unclear how he will approach his overnight Twitter rants against U.S. companies once he's sitting in the Oval Office. But for now, options traders like Davis are up in the wee hours of the morning checking his Twitter feed for any opportunity to pry out value.