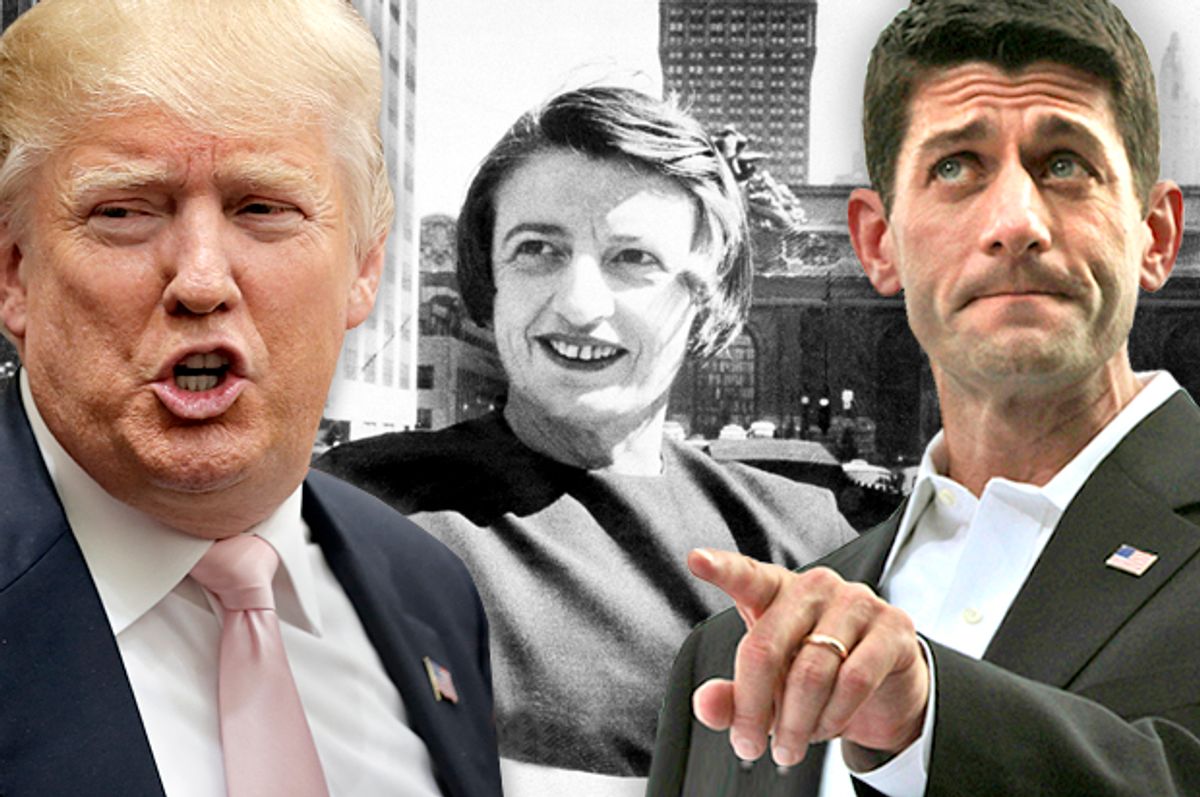 For a man who ran for president on a supposedly populist platform, Donald Trump sure has appointed a lot of extremely wealthy businesspeople to his administration. He explains to his followers at his ostentatious victory rallies that he's doing this because he wants people "that made a fortune because now they're negotiating with you," adding, "It's not different than a great baseball player or a great golfer."

The truth is that nobody really understands why Trump is choosing the people he's choosing, not even him. Reports indicate that it's a capricious process, and no one is sure if there's even a cursory vetting of the choices. Because so many of these people have no government experience there is little sense of the worldviews and philosophies that guide them.

On Tuesday, however, James Hohmann of The Washington Post identified a common thread among the businessmen, including Trump, which should have been obvious from the beginning. They are fanboys of Ayn Rand, the patron saint of selfish adolescents and titans of industry. Hohmann reported that Trump's choice for secretary of state, Rex Tillerson, who bears a Randian name if there ever was one, is a big fan of the Objectivist magnum opus "Atlas Shrugged," which he told Scouting magazine was his favorite book. Tillerson explained that he believes volunteering is not just good for the individual but good PR for a company, a notion that Rand's manly hero John Galt would undoubtedly approve of.

Andy Puzder, the nominee to be secretary of labor, is also a Rand fanatic who reportedly reads the bodice-ripping novels over and over again in his spare time. The parent corporation of his fast food restaurant company, CKE Enterprises, is called Roark Capital Group, in tribute to Howard Roark, the hero of Rand's "The Fountainhead."

And Rep. Mike Pompeo, Trump's choice to head the CIA, has said, "One of the very first serious books I read when I was growing up was 'Atlas Shrugged,' and it really had an impact on me."

Then there is Trump's new BFF, House Speaker Paul Ryan, a well-known Rand acolyte who makes all his staffers read "Atlas Shrugged" when they go to work for him.

Finally, Trump himself has claimed to be a Rand follower, as he discussed with Kirsten Powers in a USA Today interview:

Trump described himself as an Ayn Rand fan. He said of her novel "The Fountainhead," “It relates to business (and) beauty (and) life and inner emotions. That book relates to . . . everything.” He identified with Howard Roark, the novel's idealistic protagonist who designs skyscrapers and rages against the establishment.

The macho architect-builder and anti-Establishment hero also rapes the female protagonist. So you can see why Trump would relate to him.

You will have to pardon my skepticism that Trump has ever read that book. It's not just the puerile description, but the fact that there is no sign anywhere in his homes or offices that books even exist — except for the story that Paramount's Marvin Davis once gave him a volume of Hitler's speeches, which his first wife claimed he kept by the bed. (I'd still bet that he never read them.) The only thing he reads are stories about himself in the newspapers. That doesn't mean, however, that he doesn't subscribe to Rand's philosophy; it's just unlikely that he knows he does.

Hohmann also mentioned that Trump has huddled with one of the most important Rand propagandists in the country, John A. Allison IV, chief executive of the banking company BB&T Corp.  The Wall St Journal blandly described Allison as distributing copies of "Atlas Shrugged" to his senior officers and "funding classes about the moral foundation of capitalism" at various colleges. In fact, Allison has given more than $30 million to various academic institutions, with the demand that they include Rand's turgid fiction as part of the required curriculum. What role Allison might play in the Trump administration is unknown, but you can be sure that he will bring his dog-eared copy of "Atlas Shrugged" to the office with him.

Of course, Ayn Rand aficionados are hardly unknown in the high reaches of government. The most powerful one of all was the  man who bears much of the responsibility for the 2008 financial crisis and the Great Recession that followed, former Federal Reserve chair Alan Greenspan. He was even a member of Rand's inner circle in his youth and famously wrote a letter to The New York Times during that period expressing his anger at a negative review of "Atlas Shrugged":

"Atlas Shrugged" is a celebration of life and happiness. Justice is unrelenting. Creative individuals and undeviating purpose and rationality achieve joy and fulfillment. Parasites who persistently avoid either purpose or reason perish as they should.

Many young people are taken with Rand's books when they first read them, for obvious reasons. Her novels offer a romantic glorification of self-centered narcissism, a perfect adolescent worldview. Some people never grow out of that and quite a few of them end up running businesses.

Rand believed that the government was basically an evil force that stood in the way of man's destiny and only existed to take from the creators to give to the parasites and moochers. A businessperson who has imbibed that philosophy can want to join the government only in order to destroy it from within.

Paul Ryan is a perfect example of someone who is systematically working to dismantle the redistributive functions of government and end all regulations that protect the common good. He once declared, "The reason I got involved in public service, by and large, if I had to credit one thinker, one person, it would be Ayn Rand. And the fight we are in here, make no mistake about it, is a fight of individualism versus collectivism.”

As I said earlier, I seriously doubt that Donald Trump is really a fan of Ayn Rand. Her books may be juvenile and shallow, but they're way too deep for him. Still, Trump is definitely narcissistic and almost pathologically self-confident — he's like John Galt's id, without knowing it. He certainly subscribes to Ayn Rand's personal credo: "What is good for me is Good!" It appears he's found a group of like minds to help him ruin the country.