Deliberately idiosyncratic and spell-binding and wholesome and not entirely aggravating 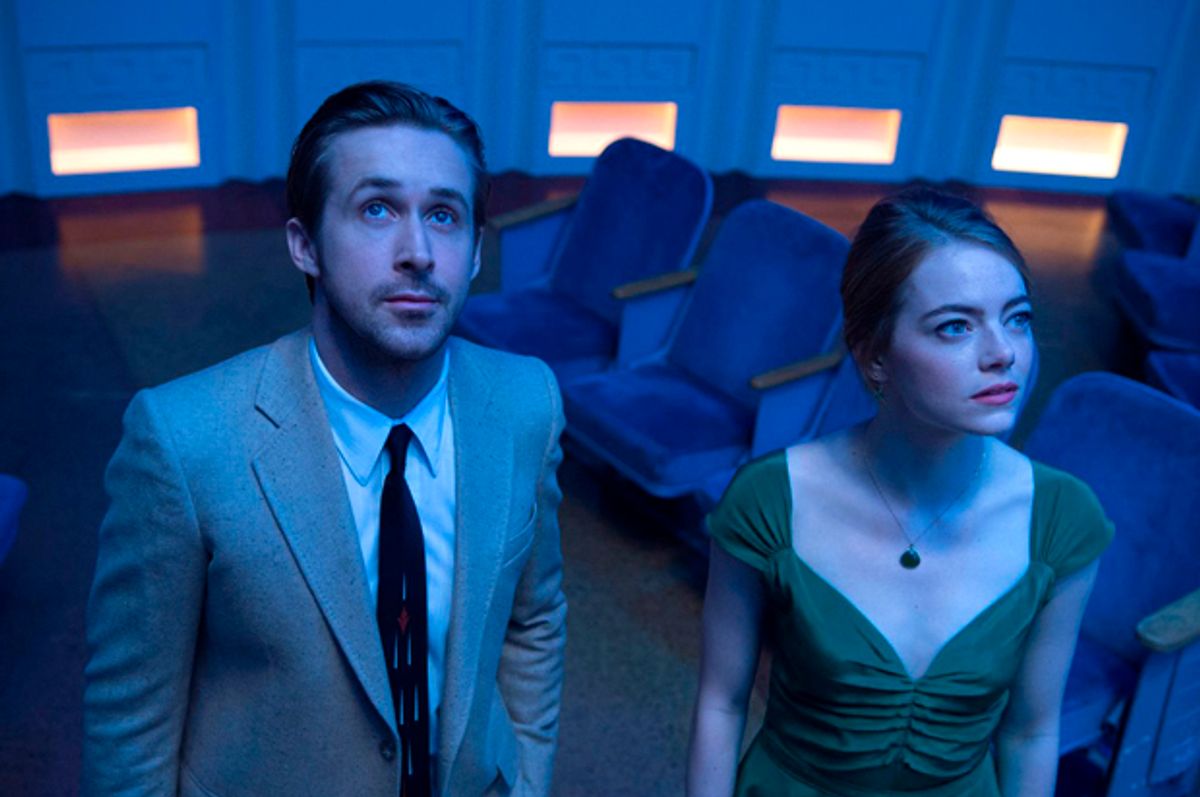 But with all the attention, can “La La Land” live up to its hype? The answer is a resounding yes for viewers who buy-into this gossamer musical fantasy. Director Damien Chazelle’s film — presented in Cinemascope a title indicates — opens in a traffic jam on the Los Angeles freeway. Radios play various types of music before the swooping camera settles in on a woman in a car who is singing. As this brightly colored musical number develops, from one voice to many, to a band appearing in the back of a van, and dancers wearing primary-color clothing doing parkour-like moves off cars, the buoyant musical number becomes almost impossible to resist. In fact, the audience at a recent screening burst out into applause at this overture.

The sequence ends with a “meet cute” between Mia (Emma Stone) an actress rehearsing her lines, and Sebastian (Ryan Gosling), a jazz musician in the car behind her. When she fails to move forward, he honks at her. She gives him the finger.

“La La Land” then follows Mia from her job at a café on a studio lot to her auditions and the apartment that she shares with three other aspiring actresses (Cue reference to the 1937 classic film, “Stage Door”). Her bedroom is decorated with a larger than life size image of Ingrid Bergman’s head as this movie-mad movie celebrates the romance of Hollywood. (There’s a “Casablanca” reference later in the film, too). The neon club signs and champagne fizzing hark back to the 1950s films. And throughout “La La Land,“ there are references to many musicals, from the faux Paris dance finale of “An American in Paris” and the career trajectory melodrama of the 1954 version of “A Star is Born,” as well as the dream ballet from “Oklahoma” and the jazz club scenes from “Funny Face.” The cell phones and Prius jokes remind viewers they are squarely in modern times.

This fight between the old and the new is at the viscid, romantic heart of Chazelle’s gooey, seductive film. Sebastian, who wants to open a jazz club, has nostalgia for a past he never had. He is an unabashed “romantic,” chiding his sister Laura (the underused Rosemarie DeWitt) for making that sound like it’s a dirty word. Mia, in contrast, is a modern actress who watched old movies as a kid. Of course these opposites attract, most notably when they perform a song and dance duet, “A Lovely Night,” citing the reasons they are indifferent to one another. It’s quite charming.

The couple’s romantic banter in this scene is cute if somewhat corny but it’s hard not to be amused by the affable performers. “La La Land” practically begs audiences to embrace it and fall under its spell.

This is in part because of the palpable chemistry between Stone and Gosling in this, their third film together. For the record, their singing is fine, but it’s not exceptional, and their dancing is strong. But Ginger and Fred, they are not — nor are they trying to be. Gosling does in fact play the piano and quite suitably.

One of the film’s more entrancing sequences has Mia and Sebastian meeting for a late show of “Rebel without a Cause” — at the Rialto, ‘natch; Chazelle is very particular about his LA locations. As the screen unspools the planetarium sequence in “Rebel,” there are sparks between these would-be lovers but they catch fire in an unexpected way. It is only when the couple leaves the Rialto to go to the real Griffith Observatory does “La La Land” become magical — and not just because the scene features some magical realism. Here, as throughout the film, music and dance serve as a form of communication and self-expression for the characters. Moreover, Chazelle wisely shows the dancers in full frame — not cutting away as Rob Marshall did in “Chicago” — allowing viewers to bask in the dance and romance. Their pas de deux never wears out its welcome.

“La La Land” is deliberately idiosyncratic, playing with time and points of view, fantasy and artifice, but the purpose of this is to enthrall. An early musical number at a Hollywood pool party is delightful even if the camera dives in the pool and spins around to a giddy, dizzying effect. A key sequence involving Sebastian performing in a band with Keith (an affable John Legend), has a catchy tune even if the point is that Sebastian is playing music he hates.

There is just something undeniably beguiling about this movie that asks us to believe in these two crazy dreamers. Chazelle captures this best in a scene where Mia performs a song called “Audition (The Fools Who Dream)” that is the film’s showstopper. Surrounded by black light, Mia sings from the heart, slowly letting her thin voice build and shifting from vulnerability to pride. In this highly affecting scene Stone conveys tremendous emotion.

“La La Land” is a worthy showcase for the magnificent Stone’s talents, and she is heartbreaking throughout. Just marvel at her expressions driving past the Rialto. The first time, she loses herself smiling in anticipation about her upcoming date at the theatre. The second time, she reflects back wistfully on the memory of having gone there. Again, the theme of past and future nicely play out in this simple moment.

“La La Land” may be more sympathetic to Mia because her character has a greater dramatic arc, but Gosling is also in top form as Sebastian. An early scene has him playing piano at a bar run by Bill (J.K. Simmons, in a nice cameo for his “Whiplash” director). Fed up with playing Christmas music, Sebastian stops. The camera swirls around him, building suspense as he plays the jazz music he feels in his heart. It’s a brief but poignant moment that reveals the truth of his character. He is a purist who has to navigate his way through a world that fails to appreciate him.

Chazelle peppers his film with many examples of his big dreamers being forced to grow up or confront a reality they may not like or want, but the feather-light approach never cudgels viewers.

Also to its credit, “La La Land” is almost annoyingly wholesome. The film has no drug use, although sometimes the characters drink. There is no sex, just some passionate, romantic kissing. It’s possible that not a single character smokes. It’s actually refreshing to see a film that could have been made back in the day. Then Sebastian drops an F-bomb, reminding folks that the film has a modern sensibility.

“La La Land” is a frontrunner for the Oscar and  a necessary tonic for our depressed and frustrated modern world.  And cynics should not be too quick to dismiss Chazelle’s enticing musical romance. Like the palm tree and clouds that are revealed to be movable scenery, the film has a trick or two up its sleeve.

Detractors will resist, but they will be missing out on the many pleasures of “La La Land.”