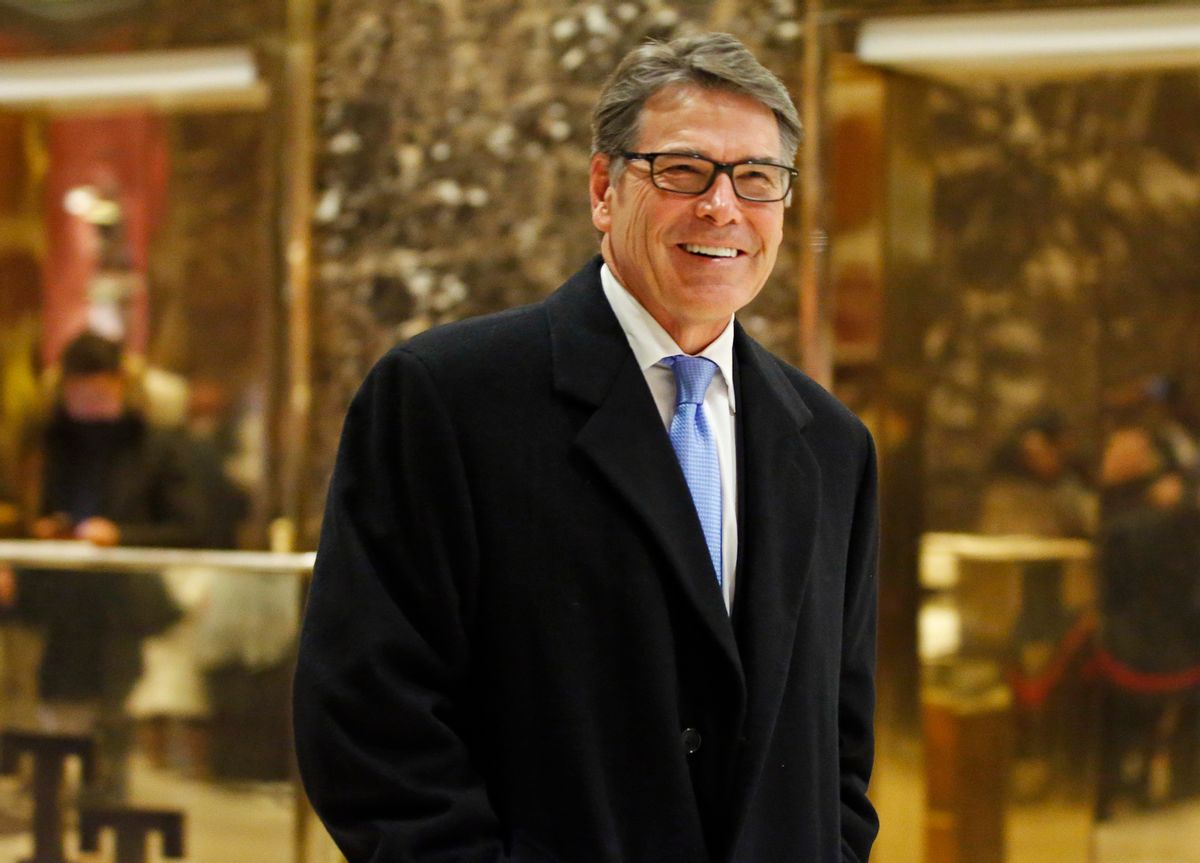 WASHINGTON — Rick Perry, President-elect Donald Trump's choice for Energy secretary, has close ties to the Texas oil industry and has corporate roles in two petroleum companies pushing to get government approval for the proposed 1,200-mile crude oil pipeline that has stoked mass protests in North Dakota.

Perry's current roles as board director at Energy Transfer Partners LP and also at Sunoco Logistics Partners LP, which jointly developed the controversial Dakota Access Pipeline project, is a strong indicator of the pro-oil industry sentiment that will likely take root at the Energy Department under his oversight. Perry is close to Texas energy industry executives, and his political campaigns, including two aborted presidential campaigns, benefited substantially from their donations.

The former Texas governor would not have authority to intervene directly after the U.S. Army Corps of Engineers' decision last month to delay the pipeline to allow talks with the Standing Rock Sioux and other project opponents. The Army will decide whether to grant an easement near the Sioux reservation in North Dakota, and the departments of Energy, Interior and Justice and the Environmental Protection Agency have had lesser supporting roles.

Trump announced his choice of Perry in an early morning release Wednesday from Trump Tower in New York.

He called Perry "one of the most successful governors in modern history, having led Texas through a sustained period of economic growth and prosperity by developing the state's energy resources and infrastructure, and making low-cost energy available to companies and families.

"It is a tremendous honor to be selected to serve as Secretary of Energy by President-elect Trump," Perry said. "I am deeply humbled by his trust in me."

Perry's close relations with energy executives and his long-time dependence on them for political contributions signal an abrupt change of course at the Energy Department. Perry is expected to welcome the four-state pipeline and similar projects, set an open-door policy for oil industry interests and possibly tear down the department altogether.

During his unsuccessful 2012 run for the presidency, Perry proposed eliminating the Energy Department. As secretary, he would be involved in policy decisions on increasing the nation's domestic supply of oil and investments in oil exploration research and technology.

During the 2016 campaign, Warren donated $500,000 to the Opportunity and Freedom super political action committee backing Perry's run for the White House. Warren also gave nearly $250,000 to Republican candidates and committees. The oil and gas industry was the dominant sector behind Perry's 2016 presidential effort, donating more than $1.6 million.

Energy Transfer's 2016 annual report showed that Perry owned $154,000 worth of partnership units. At Sunoco Logistics, Perry was awarded units worth about $101,000, according to the firm's 2015 annual report.

Perry's wife, Anita, also owned up to $15,000 in shares in Warren's flagship firm, Energy Transfer Equity LP, and a similar amount in Sunoco Logistics, according to her husband's 2015 presidential financial disclosure. Perry and his wife also reported owning several other energy-related investments including between $50,000 and $100,000 in the Dallas-based Grey Rock Energy Fund and between $15,000 and $50,000 in holdings in QR Energy LP.

The incoming Trump administration has said it plans to approve the controversial pipeline project, which was stalled in recent months by defiant protests by Native American and environmental opponents. The Army Corps ruled last month that it was delaying a decision on an easement for the project near the Sioux reservation in North Dakota. The decision quickly spurred legal complaints against the Army Corps by the pipeline project's developers.

Perry's net worth of about $3 million does not compare to the multimillion dollar fortunes of President-elect Donald Trump and other corporate leaders named to Cabinet positions in his administration. But the former Texas governor could face similar questions about potential ethics conflicts unless he divests his assets into a government-approved blind trust.

His most recent presidential financial disclosure, filed in 2015, showed that a sizeable portion of his wealth in recent years has come from energy investments and consulting work for a Texas equipment firm that provides heavy machinery for oil exploration work.

Holt, who also owns the San Antonio Spurs, has donated more than $600,000 to Perry's campaigns since 2000. Perry had at least 11 telephone conversations with Holt's company dating back to 2008, according to a review of the governor's phone records provided previously to The Associated Press under Texas public-information laws.

Perry might also face questions about his 2014 indictment by a grand jury in Travis County, Texas, for corruption-related charges. Perry was cleared of the charges in 2015, but not before he had to defend himself in a messy public case that shadowed his 2016 presidential run.

He was indicted in August 2014 following an investigation by a special prosecutor into several actions he took as Texas governor. Perry was accused on two felony charges — threatening to veto $7.5 million in funding to the state Public Integrity Unit and pressing for the resignation of the Travis County district attorney after she was convicted on drunk-driving charges.

Both charges were dismissed by Texas state appeals courts.