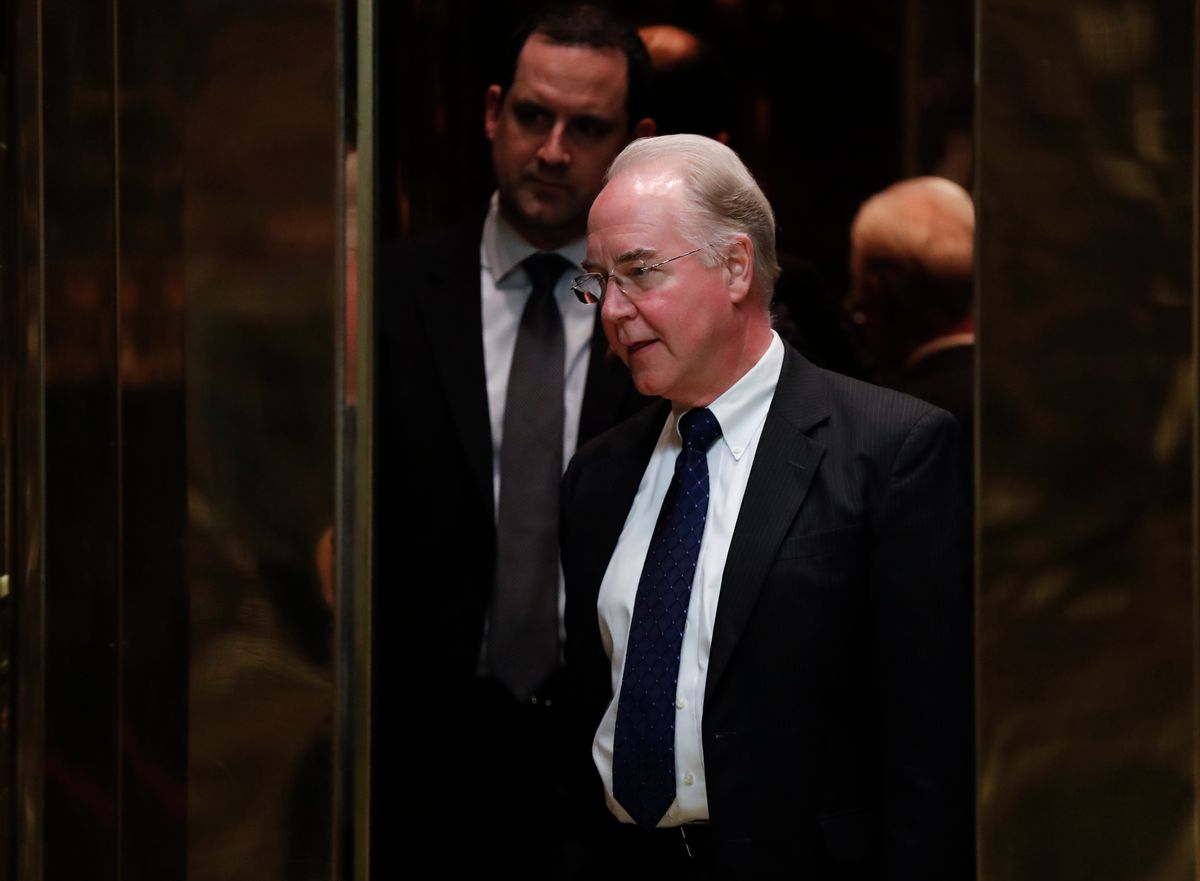 President-elect Donald Trump may have canceled a press conference meant to address his personal conflicts of interest this week, but some of his Cabinet nominees may still have to answer for their own apparent conflicts of interests as they prepare to take over massive federal agencies.

Rep. Tom Price, Trump's Secretary of Health and Human Services nominee, has received major campaign funding from and owns significant stock shares in several companies with business before the federal regulatory agency he is set to run.

The Department of Health and Human Services is a monstrous organization that oversees 11 operating divisions with an annual budget exceeding a trillion dollars. To replace current HHS Secretary Sylvia Mathews Burwell, previously a director of the Office of Management and Budget, Trump nominated a six-term Republican Congressman from Georgia best known for his crusade against the Affordable Care Act.

Rep. Tom Price was an early Trump loyalist who as leader of the House Budget Committee, proposed repealing the ACA in its entirety, privatizing Medicare, making enormous cuts to federal Medicaid funding, and abolishing the mandate that states use Medicaid dollars for patient care. As secretary, he would be responsible for the popular Children’s Health Insurance Program, which insures eight million children at some point each year. In 2007, Price opposed expansion of the program, blasting it on the House floor as “government-run socialized medicine.”

A former orthopedic surgeon for more than 20 years, health professionals and medical companies have been major donors to Price throughout his career. Now as HHS secretary, Price would have direct influence over decisions that affect many of the companies and groups that have donated to his campaign funds.

Price's top contributor, MiMedx, a Georgia-based medical company that makes regenerative wound care products, is currently locked in a debate with the FDA over how the agency should regulate its products, RollCall reported. The agency could impose marketing restrictions or even force MiMedx to halt sales that made up 12 percent of its revenue last year, a possibility MiMedx warned its investors about in a recent regulatory filing.

MiMedx donated $21,800 this cycle to Price’s campaign funds, according to the nonpartisan Center for Responsive Politics.

The FDA, which Price would control as HHS secretary, is also hashing out rules that would affect another top Price campaign contributor.

Amgen, the makers of products to treat cancer and rheumatoid arthritis, contributed $14,000 to Price this cycle.

The FDA is now considering new rules for biotech drugs that may influence the adoption of Amgen’s products and the rate at which it may lose sales to competing generic versions. In a recent regulatory filing, the company noted that Price's agency “has substantial power to quickly implement policy changes that can significantly affect how our products are covered."

And 90 percent of Price's annual budget will go the Centers for Medicare and Medicaid Services, a top purchaser of Amgen products.

Price also owns stock in companies whose fate he could directly affect as HHS secretary.

Stat News reported that Price disclosed that he bought between $50,001 and $100,000 worth of stock in a biomedical company in which a member of Trump's transition team is a director. New York Republican Chris Collins retains an ownership stake worth up to $25 million in Innate Immunotherapeutics, Ltd. The pharmaceutical firm has noted the potential benefits of having Collins invested in its success, touting Collins’ status as a member of the Energy and Commerce committee in its annual report.

Members of Congress are not required to recuse themselves from voting on bills that could affect their personal finances unless they would be the primary beneficiary of the legislation. And federal ethics rules do not require that Price automatically divest himself of stock before being confirmed to Trump's Cabinet.

But at least one lawmaker, Connecticut Democratic Representative Rosa DeLauro, has called on Price to eliminate any potential conflicts of interest by divesting and putting his assets in a blind trust.

“I hope that Mr. Price will hold himself to a higher ethical standard than his new boss,” DeLauro said. “Mr. Price must set his business dealings aside and work for the American people, not the pharmaceutical industry.”