ExxonMobil CEO and Trump pick Rex Tillerson: "My philosophy is to make money"

"If I can drill and make money, then that's what I want to do" 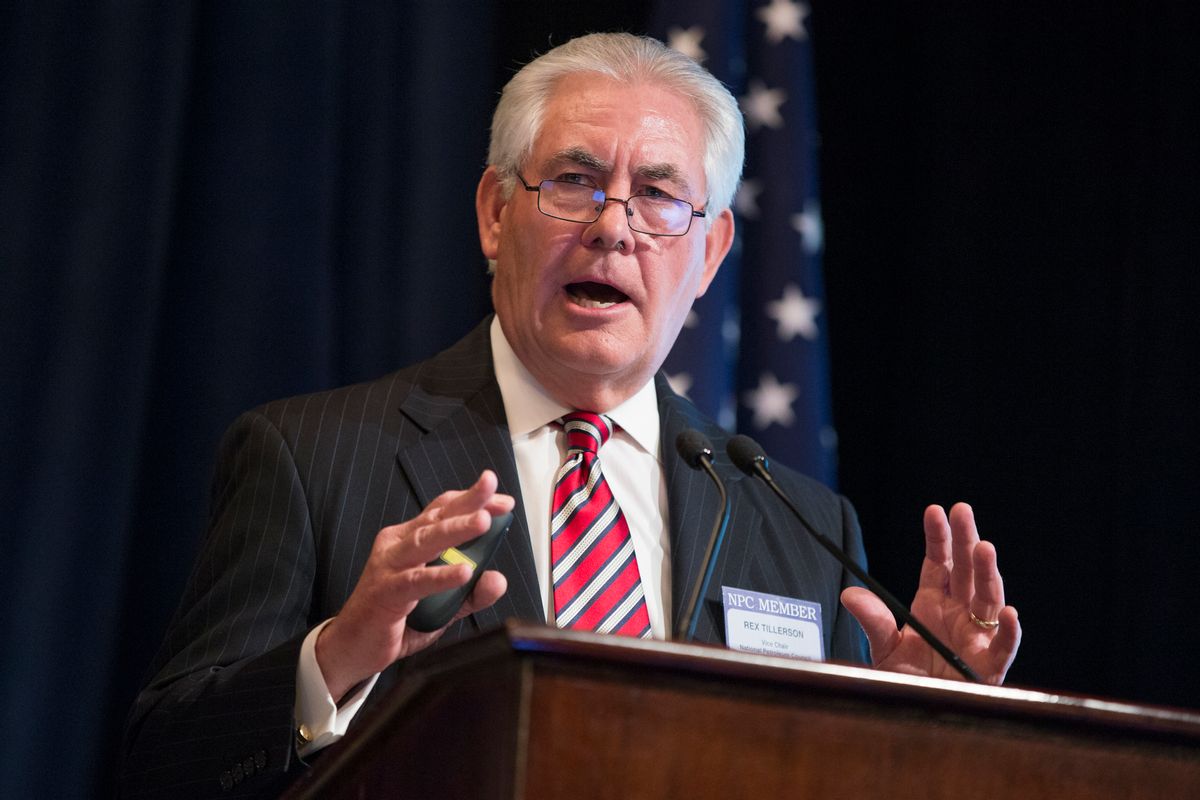 FILE - In this Friday, March 27, 2015 file photo, ExxonMobil CEO Rex Tillerson delivers remarks on the release of a report by the National Petroleum Council on oil drilling in the Arctic, in Washington. On Saturday, Dec. 10, 2016, President-elect Donald Trump moved closer to nominating Tillerson as his secretary of state, meeting privately with the business leader for the second time in a week. (AP Photo/Evan Vucci, File) (AP)
--

Rex Tillerson, the CEO of the ninth-largest company in the world, is Donald Trump's new pick for secretary of state.

In March 2013, he was asked what he'd do if he had a job in the White House in an interview with CBS host Charlie Rose. Tillerson spoke about balancing the risk and reward of oil explorations in regard to pipeline disasters — particularly the BP oil spill in the Gulf of Mexico.

"In terms of drilling, whether it's Alaska or offshore ... is your philosophy 'drill, baby, drill'?" Rose asked the CEO.

"My philosophy is to make money," he answered. "If I can drill and make money, then that's what I want to do."

The interview was conducted just three weeks before another major oil spill in Mayflower, Arkansas, which ultimately ended up costing ExxonMobil $5 million. Apparently, for Tillerson, it was a risk worth taking.

Rose then turned to oil companies' enormous influence in Washington.

"If you wanted a national energy policy, you could get one," Rose told Tillerson.

"I wish that were true," Tillerson, beaming, said.

Rose asked Tillerson to imagine that policy. Little did he know Tillerson would be a key player in the Trump administration four years down the line.

"Imagine this for a moment. The president of the United States calls you and says, 'Rex, I'd like for you to come down to the White House and let's have a conversation. These are tough times, and I'm trying to do the best I can.' You would say to him — what?" Rose asked.

Like Trump, Tillerson has no experience in the public sector, but is quite familiar with international diplomacy.

"Much of what's been done up to this point is an enormous amount of interference with that process of discovery and perfection and improvement, and it's been by well-intended people ... who want to promote the advancement of alternative energy sources," Tillerson said. "But in the kinds of programs that have been put in place that involve mandates and enormous incentives ... I've always stressed to people that what you have really done is you have 'shackled' the innovative process."