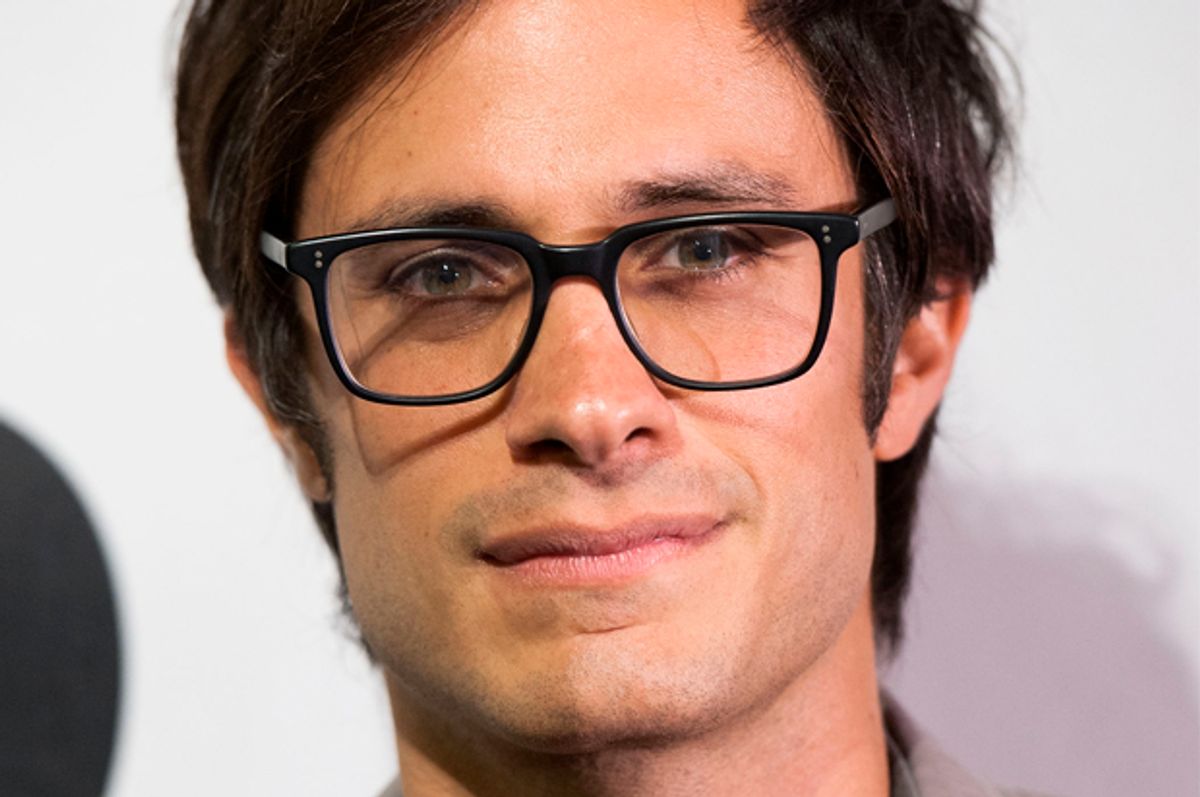 Gael García Bernal, the Mexican actor who rose to fame as a horny teen in “Y Tu Mamá También,” is truly a chameleon. He notably learned a Spanish accent and donned drag to star in Pedro Almodóvar’s “Bad Education.” He reteamed with with “Y Tu Mamá” co-star Diego Luna — and deliberately sang badly — in the soccer comedy “Rudo y Cursi” and he’s done a number of real-life roles ranging from Ernesto Guevara de la Serna (“Che”) in “The Motorcycle Diaries” and Iranian-Canadian journalist Maziar Bahari in Jon Stewart's “Rosewater.” Already this year he appeared as a Mexican trying to cross the U.S. border in the topical thriller “Desierto,” and played an admiral in the Argentine film, “Eva Doesn’t Sleep,” now out on DVD.

García Bernal also won a Golden Globe this year for his performance as an unconventional conductor, Rodrigo, in the Amazon TV series “Mozart in the Jungle.” In his copious spare time, the actor made an auspicious directorial debut with his stinging class-conscious drama, “Déficit,” as well as producing a dozen critically acclaimed Mexican films including “Drama/Mex,” “I’m Gonna Explode,” “Sin Nombre” and “Miss Bala.”

In the new film “Neruda,” which was nominated for a Golden Globe this week for Best Foreign Language Film, Garcia Bernal reteams the actor with director Pablo Larraín (“No”). The actor doesn’t play the title character — though his talents might suggest he could — but is Óscar Peluchonneau, a detective assigned with capturing the famed poet Pablo Neruda (a canny Luis Gnecco) in 1948 Chile. This stylish, outstanding drama, has Neruda playing cat-and-mouse with Óscar, and features witty commentaries on politics, Communism, detective stories, and even existentialism as the cop chases the poet.

García Bernal spoke with Salon about his characters and his career.

It’s really interesting to talk about “Neruda” as a point of departure to talk about the creative process. To put up something that is written is a revolution in a way. Someone once said [about filmmaking], “In the worst case scenario, let’s shoot the script!” In different languages the word “script” has different significance. In English it is “script,” in Spanish it is “guide,” and French and Italian it is different too. If we take it literally, a script is a guide to go from this point to this point. Putting it together and putting it out there, however, requires an antagonistic revolution. As a performer you want to embody the character and reinvent and not just go where it is leading. There is no established point of departure — it depends on the film, the scene, the day, the actors, and the collective working on the film. It’s a wonderful, complex and profound version of the experience of the creative process. Cinema has its many flaws in terms of an art form — it cannot be defined or redefined as an art form — it has that thing of revolution that goes on within a film that changes and keeps on changing.

What I enjoy about watching you on screen is your impish charm. “Science of Sleep,” “Bad Education” and “The King” are all good examples of that. You have this air of mischief about you in many of your roles, including “Mozart” and now “Neruda.” Can you talk about playing those kinds of characters?

There is something unified with those characters that comes from Oberon in “A Midsummer Night’s Dream.” They wander around the landscape of the unconscious and present themselves in reality. I like that! It’s a natural place of entertainment. It’s the fool.

Óscar is described by one character as “half moron, half idiot.” You have played some unintelligent characters before (“Rudo y Cursi” comes to mind). How did you work at making Óscar look smart, but also reveal he is not so smart.

[Laughs]. That’s the interesting thing about the essence of fascism in “Neruda.” There are two strands that motivate Oscar and Fascism. Listening to a poet exercise his freedom and talk about the common good makes people reactionaries against him. Neruda has a bohemian life; he doesn’t have a family and that motivates the fascist attitude. The fascist reacts against someone who thinks he’s stupid, which makes him three times more stupid than he is. He falls into a trap and sounds even more idiotic. To not observe and acknowledge human complexity, and only act on negative things, [is wrong]. It was interesting to navigate those waters. The film is not about showing [from] where fascism comes, but about what motivates a policeman to capture a poet? It’s symbolic of how authoritative systems are built to stop someone from exercising their freedom.

I know you’ve played many different characters over the course of your career, but this may be the first time you played a cop. Can you talk about taking on this kind of role?

It’s fun to play because it’s a strange job. I cannot grasp it. I have such appreciation for cops everywhere, but I have a problem with cops that you can’t have a dialogue with, and that’s becoming more a trend — that you can’t have an argument with them. We constructed the character not with a backstory, but as a son of a prostitute. He’s adopting his new identity. Neruda writes for marginalized people like Óscar. That whole creation is exactly the type of character in society that Poetry, with a capital P, didn’t influence. Poetry can give readers access to another world. For a policeman [like Óscar], that is denied because he has to live a simple, specific, practical, real life. He can chase him, but he cannot grab him.

Detectives are often observant, and yet Óscar seems to miss Neruda when he is right under his nose. Can you talk about how you use observational skills to find a way to play the characters you do?

It is not a hidden pleasure, but it is a clandestine activity. You observe your family and those in your immediate context. There is nothing more fascinating to be in a surgeon’s room, or attend a meeting of an electrician’s syndicate union. I find it incredible to observe reality that way; it’s like being on a school field trip. There’s a humor in human interaction, too, and that’s what I pick up on to play characters with more conviction. There’s a whole bunch of aspects of watching people that I enjoy, even when I travel. It’s incredible and non-stop enjoyment. It’s why I can’t be a hermit. I would be aching to watch and see how people interact.

Óscar is told that he must catch Neruda if he wants to go down in history. What are your thoughts about legacy given what you have accomplished in your career so far?

OMG! [Laughs]. Oh, man. I have to shy away from those questions, especially if I ask them of myself. In a way, I do, but it’s a personal thing. We all do it to find the meaning of why we do what we do. I’m hoping in terms of work that whatever we end up doing, that it has some transcendence — artistic, or more didactic — or echo socially, or be part of a conversion, or sparks a question of something happening. Everything we do — and it is a “we,” it does not come directly from me — we get a chance to accomplish something. At the same time, I do this because of fraternal experience and being in a group of people and building a family. With Pablo [Larraín] we have a good rapport. On our own, we might be good football players, but as a team we are unstoppable. There is something you get — this strength — that allows you to jump off a cliff together. You wouldn’t do that on your own.

There hasn’t been a clear structure. I never thought about things in a cost-benefit sense. It’s never been a business or mathematical decision. It’s a gut reaction. It’s pure math in that sense. Where it can take me in terms of the experience, not the outcome. At the same time, I react earnestly and innocently to what I’m feeling at that moment. I took a job once because I had to get paid to support my family and kids, or to have fun because it was a play in Iceland. It sounds crazy, but who would say no to that? You think what the fuck? How did I end up on top of a glacier, shouting?

You won a Golden Globe for “Mozart in the Jungle,” which is a complete change of pace from “Neruda.” You also have several films “Eva Doesn’t Sleep” and “Salt and Fire” coming out. Why work so hard? Are you an overachiever? Do you ever relax?

[Laughs]. That question is an answer. It’s a good one because the mode I’m entering now, I want to chill out a bit and take it easy. Because the perception is that the films all come out together and it’s complicated to be in something and work on something else at the same time. I’m going to try to keep it more linear and wait for the waves, and not want to catch every wave. Whenever I relax I say I’m going to study this, and then I enroll in something and I have to finish a thesis. It’s a problem to have free time because I end up doing more things.