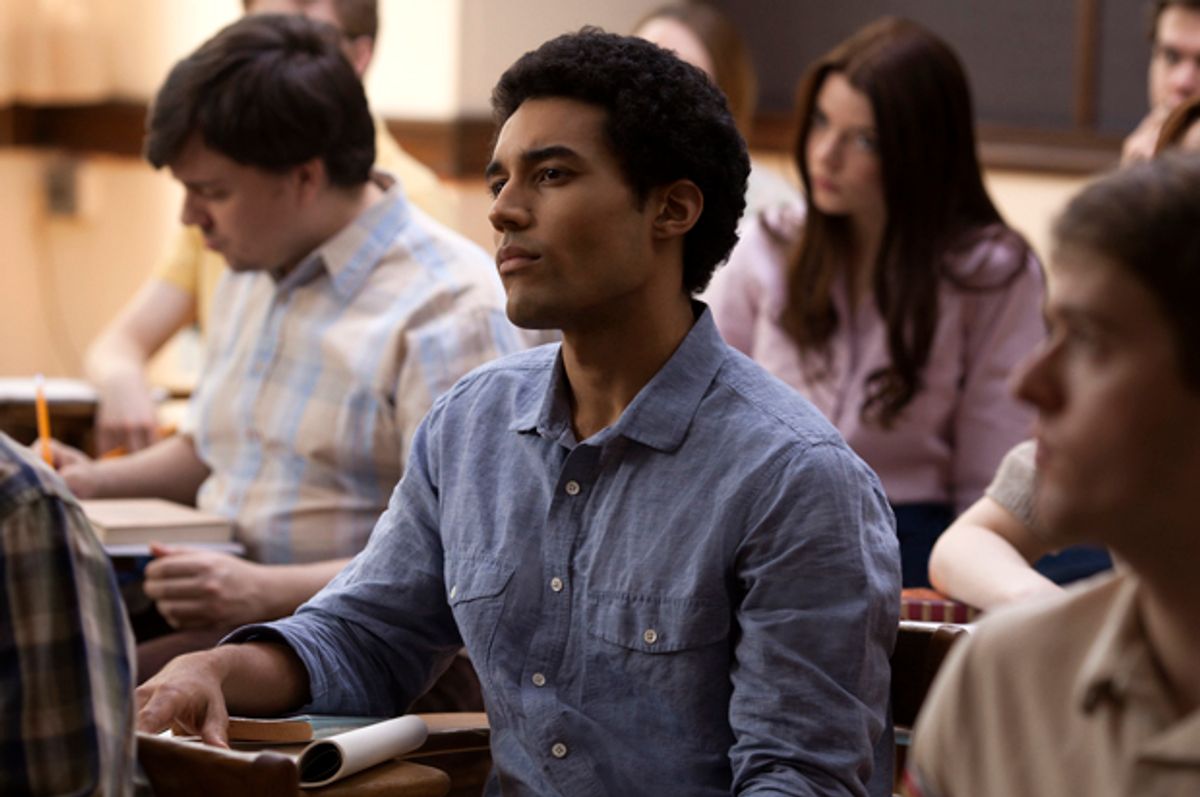 Netflix’s choice to debut “Barry” during the final days of Barack Obama’s presidency makes perfect sense from a marketing standpoint. That it’s premiering tomorrow opposite Amazon’s rollout of season two of “The Man in the High Castle,” though, is a handy example of kismet.

The two pieces are enormously different, mind you; “Barry” is a film that made its premiere at the Toronto International Film Festival, and its Netflix release coincides with a limited theatrical run in New York and Los Angeles. “High Castle” is a series that merits a separate examination, but it’s worthwhile to consider for a moment due to its subject matter and tone, and the fact that it, too, is premiering as Americans anxiously teeter on the precipice of a new and frightening political era.

“High Castle,” a series version of Philip K. Dick’s alternate version of American history if the Nazis had won World War II, presents a terrifying vision of what America could become at its very worst.  “Barry,” meanwhile, is a dramatic rumination on a chapter from Obama’s formative years, shown as a man still finding his place in a world that he still didn’t quite understand.

Both works are fantasies informed by history, and each conveniently accessorizes today’s dinner table discussions. As Americans take stock of the legacy Obama will leave behind after eight years in the Oval Office, many also are tense with concern as to the tone Donald Trump’s leadership will set.

“Barry” director Vikram Gandhi presents a pre-“Hope and change” Obama here, a 20-year-old man doing his best to figure out the world and his place in it. Just like every other twentysomething. Gandhi’s portrait of the outgoing commander-in-chief as a genial junior-year transfer into New York City’s Columbia University reflects the quality that made our first African American president so appealing: his normalcy.

Obama was never average; his international upbringing and bi-racial, multi-cultural parentage ensured that he could never be thought of as such. But in “Barry,” he’s seen as a young man figuring out his identity, how society views him and where, if anywhere, he can fit in.

“Barry” shows Obama as a poet philosopher, and the Australian actor playing him, Devon Terrell, plays him as an optimist whose intellectual curiosity outweighs his naïveté about the pervasiveness of prejudice and systematic oppression of minorities.

The film only covers a few months in Obama’s life, beginning in the autumn of 1981 with a shot of him smoking a cigarette on a plane, the red embers of the tobacco glowing in the dark as the aircraft flies low over Manhattan.

New York life jostles him immediately; he has an apartment in a terrible neighborhood, and his most loyal friend is a Pakistani cokehead (Avi Nash, in a scene-stealing role). In one of his classes Barry impresses and intimidates his fellow students, helping him to gain the attention of a girl named Charlotte (Anya Taylor-Joy).

Charlotte is a fictional composite of a number of women Obama dated during his college years, much in the way that “Barry” is a quilt fabricated from pieces of what one of its producers described as “emotional truth.” There isn’t much information available about the Barack Obama during this period, which is only lightly touched upon in his 1995 memoir “Dreams From My Father: A Story of Race and Inheritance.” Even Obama himself described his time at Columbia as a period of intense study, with much of his time spent studying alone in the university’s library. Ergo, few of his classmates got to know him all that well.

Gandhi and first-time screenwriter Adam Mansbach embraced that ambiguity and created a story of a young man coming to understand the frustration and loneliness that can accompany having dark skin in America.  A fellow player at a pick-up game of basketball at a public court gives him the nickname Invisible after he sees Barry reading Ralph Ellison’s “Invisible Man”, and somewhat predictably, that moniker comes to symbolize the future leader’s struggles during his first days in New York.

A masterwork, "Invisible Man" addresses many themes and innumerable concepts but among these were questions about individuality and African American identity, and how those clash with white supremacy, structural racism and political ignorance.

Barry’s attempt to find friends at Columbia takes him to a number of places where his mere presence seems to create a discordant twang in the atmosphere. The audience and Barry feel it when he walks into an unfriendly all-white frat party, then into the Manhattan club scene. Charlotte takes him to meet her parents at the Yale club, where the fact that he’s the only person of color in the place creates an undercurrent of strain in their relationship that never goes away.

Even when Barry accompanies his friend PJ (Jason Mitchell) to the projects where he grew up, Barry still doesn’t feel a sense of belonging. “This ain’t my scene” is as constant a refrain in this script as the clueless declarations by his well-meaning white friends that because he’s only half-black, he can fit in everywhere.

Gandhi’s direction brings out superior performances in the film’s cast, particularly in Terrell, whose imitation of Obama’s singular ways of speaking and mannerisms is nearly flawless. Much as a person may be curious to watch “Barry” with the president to see how accurate the story is, it’s tough to imagine he’d find fault in the actor’s impersonation. Ashley Judd, too, grants Obama’s mother a welcome tenderness that plays well against Terrell’s heated confusion and quiet anger in the scenes they share.

Mansbach’s script is another matter. The writer best known for the so-called children’s book for adults, “Go the Fuck to Sleep,” shows little of Gandhi’s nuance in writing scenes that speak to Obama’s search for place. At times Barry’s identity quest ventures into biracial tragedy stereotypes and clumsily rendered outsider moments that feel jammed into the story as if to pound us in the face with the story’s image of Obama being all-American and invisible all at once.

One minute he’s walking past aggressive black militants calling a white woman passing by a bitch. In another he’s confronted by a white classmate who unironically and aggressively demands to know why everything is about slavery.  Of course, later the same guy has to vouch for Barry when a campus security guard singles him out for harassment – and still doesn’t get what the problem is.

“Barry” is among the first of what will surely be many films about Barack Obama, and while it’s not a travesty, better works will capture the essence of man’s magnetic draw without pandering of tired tropes. But at this moment, when the idea of looking backward is preferable to playing the maddening game of guessing what kind of future the new regime has in store for us, its fanciful vision of hope in the face of mundane ignorance may be all that many of us can stomach.