Since Gov. Pat McCrory finally conceded, Republicans have been rushing to strip power from the governorship 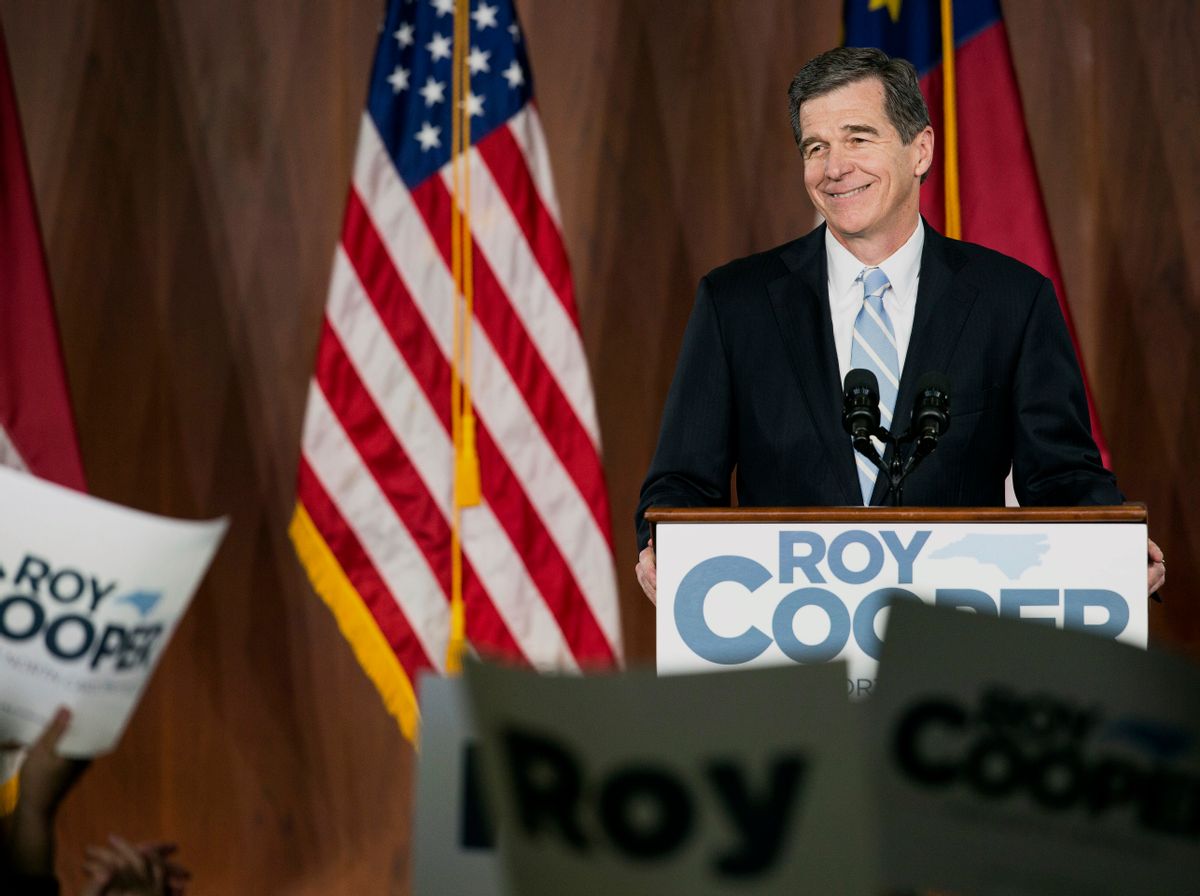 Nearly a month after the election, North Carolina's Republican Governor Pat McCrory was the only incumbent left in the nation to concede his race. Now, less than a week after McCrory accepted defeat, Republican lawmakers in the state are already rushing to severely limit the powers of the office before his Democratic victor Roy Cooper takes the reins on Jan. 1.

Taking advantage of an emergency session for disaster relief on Wednesday, Republican state legislatures called a surprise session to take aim at reducing the power of the state’s newly elected Democratic governor. The last time GOP lawmakers called such a high-profile special session, they ended up ramming through one of the state's most controversial laws, the so-called "bathroom bill" limiting what public bathrooms transgender people can use.

This time, in what North Carolina Democrats describe as an "unprecedented, shameful and cowardly power grab from Republicans," a raft of unrelated bills were introduced after GOP legislative leaders convened a special session to approve $200 million of disaster recovery aid for Hurricane Matthew and wildfires, at the request of McCrory. The Republican legislature convened the special session to undercut Cooper’s imminent leadership.

One proposed Republican bill would force the incoming Democratic governor to take his Cabinet choices to the Republican-controlled Senate to get confirmed and would remove the governor’s appointments to trustee boards at University of North Carolina system schools.

Another bill would reduce the number of appointments available to Cooper to 300, a steep reduction from the 1,500 Republicans authorized for McCrory. These workers are often policy makers who are politically allied with a governor.

Republicans also offered a bill that would overhaul the state’s elections boards. Under the new rules, Republican Party appointees would chair the board during even-numbered years when there are legislative, congressional, and presidential elections. Many of the election boards that were to have a bipartisan spilt had cut voting hours, polling locations, and Sunday voting when controlled by Republicans.

Another bill would confirm the nomination of McCrory state budget director Andrew Heath to a Superior Court judgeship, while yet another GOP bill would let him pick the Industrial Commission chairman for the next four years.

Republicans are also pushing efforts to abolish car-emissions testing in many counties and to make it easier to replace scientist on state environmental boards with industry representatives.

All of this is possible because when Republicans won control of the state legislature in 2010, the set out on a massive redistricting effort that unconstitutionally gerrymandered the state until they retained a supermajority. Republicans control 74 of the 120 seats in the General Assembly.

“This ain’t right,” House Democratic Leader Larry Hall of Durham told the Raleigh News & Observer. “You can’t make it right. The people of North Carolina aren’t being treated right. We owe them more.”

Cooper condemned the special session in a news conference Thursday morning and Democrats held a morning rally at the capitol to protest GOP actions:

Some Republicans admit the move to strip the governorship of vital capabilities would not have occurred had McCrory held on to his office.

"I think, to be candid with you, that you will see the General Assembly look to reassert its constitutional authority in areas that may have been previously delegated to the executive branch," Republican Rep. David Lewis told reporters, adding that "some of the stuff we're doing, obviously if the election results were different, we might not be moving quite as fast on."

Voting on the bills will start Tuesday.