The baby postulation: Is "The Big Bang Theory" formula potent enough to survive a bundle of joy?

Adding a baby to an ensemble sitcom tends to be a bad idea, but it may be the catalyst this CBS veteran needs 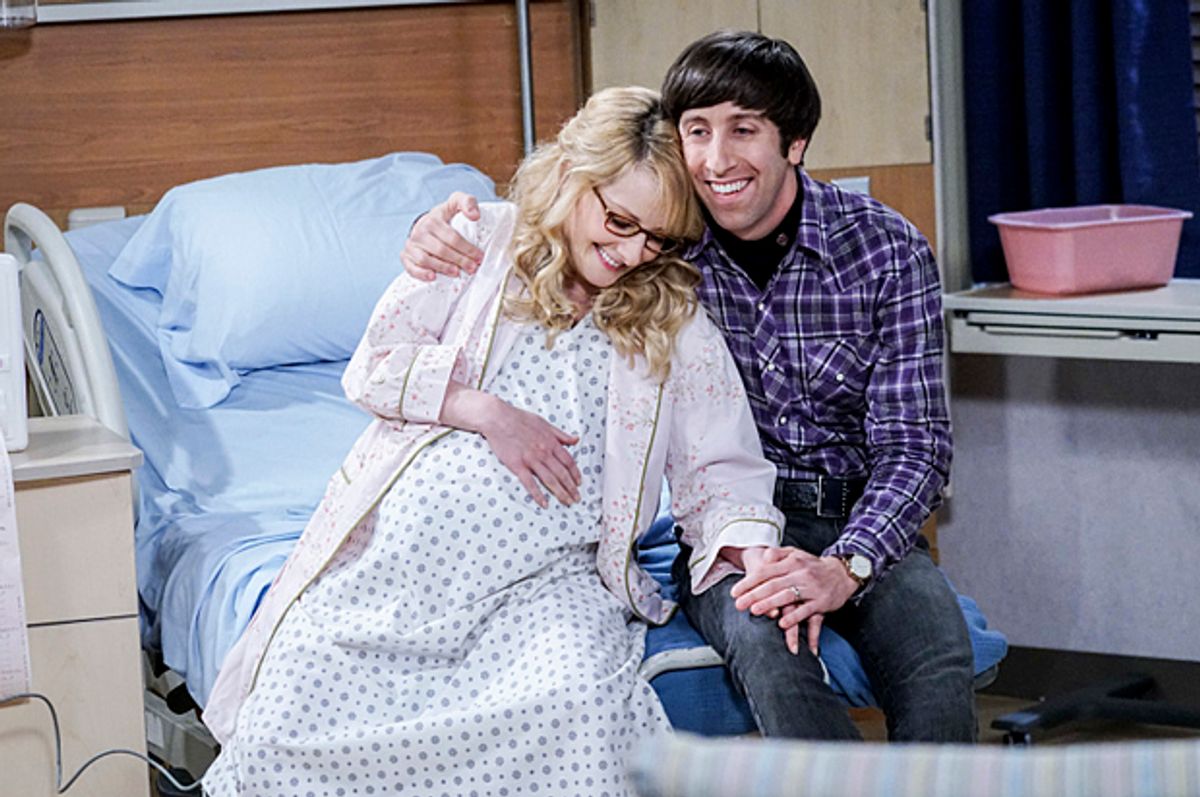 As any parent of a child under 18 years of age will tell you, babies wreck your life. Utterly. Sure, your friends who are mamas and papas will tell you it’s amazing. “I never knew I could love like this before!” their mouths will say. But look behind their eyes, especially the sleep deprived ones with young children. Really look.

What’s true is real life is doubly so on television. With few exceptions, there is no surer way to send a show into decline than popping a wriggling, pooping organic agent of entropy into the cast. But that’s where CBS’s “The Big Bang Theory” is boldly going at 8pm Thursday this week with the birth of baby Wolowitz.

Currently the top-rated series on television, “The Big Bang Theory” is in its 10th season and shows very few signs of slowing down. Having raced past the 200th episode marker and ensured a lengthy afterlife in syndication, the series can afford to venture into Cousin Oliver territory these days without threatening to do much if any harm to the brand.

Besides, if there were ever a series in which a small child could slide in without upending any plot arcs, it’s this one. Leonard (Johnny Galecki), Howard (Simon Helberg), Raj (Kunal Nayyar) and Sheldon (Jim Parsons) are homebodies who would rather hang out with their wives and girlfriends Penny (Kaley Cuoco), Amy (Mayim Bialik) and Bernadette (Melissa Rauch) than go bar-hopping in Pasadena.

Each is some version of a manchild/gentleman combo, which is to say that aside from Sheldon, these guys are willing to do just about anything for the women in their lives. In the case of mama’s boy Howard, that’s true to a pathological degree. He allowed his mother to run his life, and found an equally domineering match in Bernadette. (They’re also obsessed with comic books, fantasy movies and toys, theoretically making it easy for them to find common ground with wee tots.)

But to return to that original idea of babies ruining everything, the “Big Bang” birth and Bernadette’s pregnancy also represents an about-face for that character. In a fifth season episode called “The Shiny Trinket Maneuver” Bernadette admitted that she doesn’t like kids because she was forced to take care of her younger siblings when she was a child.

“Don’t you think it’ll be different when the child is ours?” Howard asked her then.

“Right. When it’s our kid that’s ruined my body and kept me up all night and I’ve got no career and no future and nothing to be happy about for the next 20 years, sure!” she snaps in reply. “That’ll be completely different.”

Bernadette was a late entry to the series, and I always enjoyed her character, but in that moment I absolutely loved her.  On television, motherhood or aspiring to be a mother is seen as part of the normal order of things. Witness how nutty everyone got over those famous four final words on the “Gilmore Girls” reboot.

Never mind if a woman is still in the midst of figuring out who she is or excelling in her career; every woman wants a baby. Especially married women. To be a married woman who doesn’t want a child is puzzling; if you have a husband right there with you, why not go ahead and shuffle your genes together?

The answer is in those valid reasons Bernadette listed in her rant.

Then again, that tirade still happened on broadcast television — and CBS — so of course Bernie had to compromise. “It’s obvious having kids is really important to you,” she tells him later, “and I think I came up with a solution.

“Seeing as how I make way more money than you anyway,” she continues, “what if I worked and you stay home with the kids? You know, you watch ‘Barney’ and pull Cheerios out of their noses and go on playdates, and I’ll work and have conversations with people my own age and enjoy my life.” Boom.

Real life, and life in the show’s version of Pasadena, rarely if ever goes as planned. A few episodes later, Howard was blasting into space for a stint on the international space station. Today he, Sheldon and Leonard are working on a potentially lucrative project for the government. Bernadette’s career is still humming along, and  the couple has since become friends with a socially stunted comic shop owner, Stuart (Kevin Sussman), who is setting himself up to take on the role of “manny."

Although the mechanics may be in place minimize the impact of the show’s tiniest addition, "Big Bang" may be courting disaster nevertheless. As a rule, late-in-the-game sitcom babies herald the end of a show because they change its characters. If they don’t, the plot contortions to work around the infant become unbelievable.

Do you remember what Ross and Rachel’s kid looked like on “Friends”? No? That’s because the child usually disappeared into a magical playpen before she could start crying. Which of the “I Love Lucy” episode featuring baby Ricky do you love the most? Probably none of them.

But an element unique to “The Big Bang Theory” is its way of embracing television bromides while slightly altering the stale formulas that produced them.  “The Big Bang Theory” has been building to the spawning of Bernadette and Howard since the airing of last season’s Valentine episode — the comedy’s 198th — when the younger Mrs. Wolowitz let it slip in an aside that she was pregnant.

Other series would have waited until the 200th episode to drop that bomb; it’s the kind of sitcommy shocker that the audience would expect to see in a landmark installment. In making Howard and Bernadette’s life-altering reveal before the celebratory 200th, however, the writers retained control over any element of surprise they could wring out of a sitcom trope.

“Big Bang” co-creators Chuck Lorre and Bill Prady have approached all of the show’s “big moments” in this way since the earliest seasons of the show, and showrunner Steven Molaro continues to do so today. Theirs is a story of a close-knit family of choice. In such families, courtships, marriages and births are part of moving forward with life. Those are major life signposts, sure, and sometimes special enough to merit a role in a season finale.

Sheldon and Amy finally having their own “big bang” following Amy's years-long crusade to get him into the sheets? That was enough to inspire a special “event” episode.

The birth of Bernadette and Howard’s child, in contrast, is merely an inevitability. The episode, titled “The Birthday Synchronicity” is debuting outside of the fall sweeps period and ensures that the new arrival itself isn’t the only story engine. The onset of Bernadette’s labor coincides with Amy’s birthday, an occasion for her and Sheldon engage in one of their infrequent sexual encounters. (“Childbirth, looming coitus – it’s a banner night for female genitals!” Sheldon deadpans.) It also inspires the characters to take stock of all they’ve achieved since they met each other. (Note: This paragraph has been corrected since its original publication.)

And “Big Bang” viewers may one day look back on this episode and realize that my initial argument really is true. Babies do wreck a person’s life — her old life. Hopefully the comedy that the newborn Wolowitz brings to the show’s new era will make taking the parenthood plunge worthwhile.