What did Donald Trump know about Vladimir Putin's attempt to hack the election — and when did he know it? 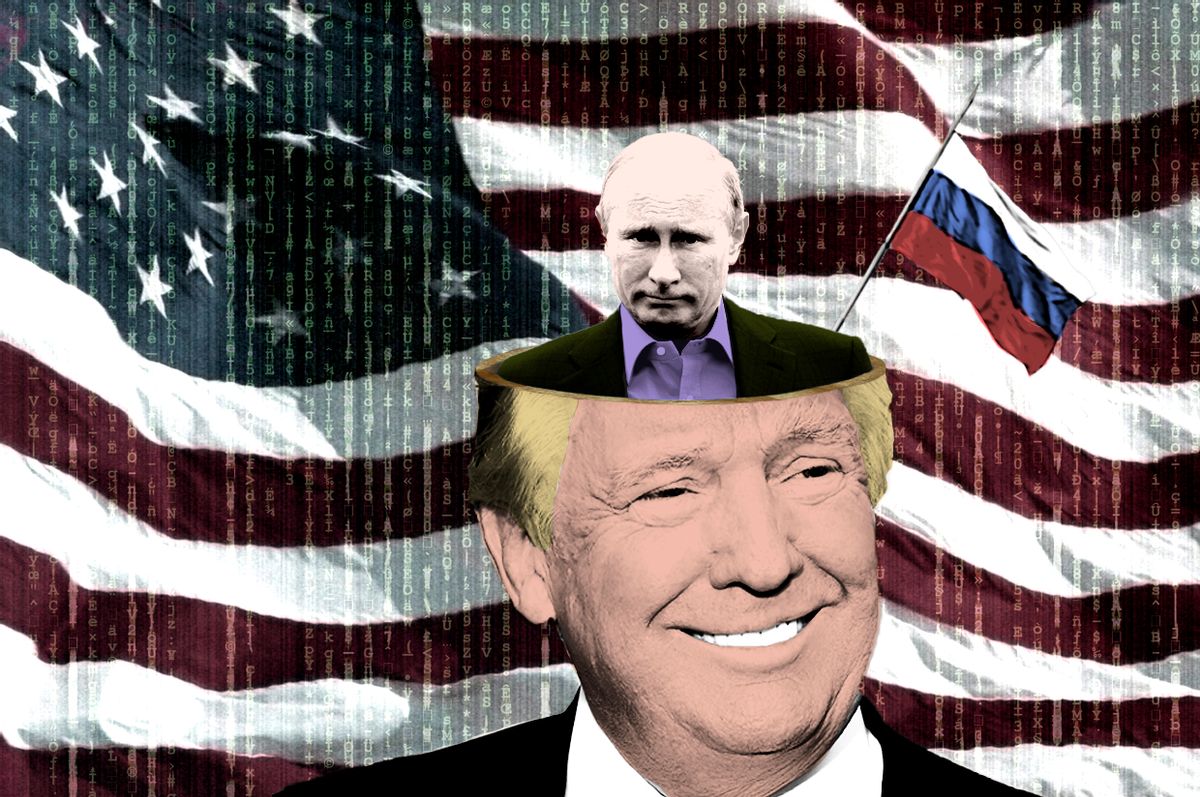 One of the most memorable moments of the 2016 presidential campaign was the GOP debate in which the man who would later become our president-elect felt the need to reassure the American people about the size of his penis:

It didn't end there. After the debate there was this:

Trump could not laugh off the jibe and had no shame in openly discussing his manly attributes in the most public forum imaginable. It was clear in that moment that he was simultaneously insecure and shameless. That's an odd combination.

Dominant masculinity was a central theme of Trump's campaign and apparently intrinsic to his appeal. Josh Marshall at Talking Points Memo developed a thesis some time ago about what he called "dominance politics" and described Trump's particular version of it as being  "largely about getting inside other people's heads with over-the-top aggression that knocks them on their heels and leaves them unprepared to fight back." It's as apt a description of Trump's pugilistic style as I've seen.

The idea was well illustrated by Paul Waldman in this piece for the The Week:

When Trump decides to go after you, he considers carefully both your weak points and the audience for his attack. So when he decided to pummel Jeb Bush — apparently for his own amusement, as much as out of any real political concerns — he hit upon the idea that Bush was “low energy,” something Bush had a hard time countering without sounding like a whiny grade-schooler saying, “Am not!” More than anything else it was a dominance display, a way of showing voters he could push Jeb around and there was nothing Jeb could do about it. With a primary electorate primed by years of watching their candidates fetishize manliness and aggression, the attack touched a nerve.

Marshall pointed out that the Republican party has been practicing this form of politics for a long time, but that Trump is something of a savant:

Trump doesn't apologize. He hurts people and they go away. He says things that would kill a political mortal (ban members of an entire religion from entering the country) and yet he doesn't get hurt. Virtually everything Trump has done over the last six months, whether it's a policy proposal or personal attack, has driven home this basic point: Trump is strong. He does things other people can't.

For months he bragged, strutted and insulted every rival and when they finally  conceded defeat he would welcome them back into his good graces as long as they publicly submitted to him. Who can forget the picture of Chris Christie standing behind Trump at a press conference as if he were Carson, the butler from "Downton Abbey." Trump's recent behavior toward his formerly harsh critic, Mitt Romney, in which he dangled the secretary of state job and demanded an apology, before ultimately giving the post to someone else, is another example.

And we know all too well what Trump did to Hillary Clinton. By the time the campaign came to an end he was snarling to her face that if he became president he planned to throw her in jail, something he later recanted but which hovers over her like a sword of Damocles if she ever steps out of line.

Foreign leaders came in for similar insults. When Time named German chancellor Angela Merkel person of the year for 2015, Trump tweeted "I told you @TIME Magazine would never pick me as person of the year despite being the big favorite. They picked person who is ruining Germany." (Since he won it this year, he's been complaining to his cheering crowds that TIME no longer calls it "Man of the Year," apparently feeling that being a mere "person" is less impressive.)

Interestingly, we haven't heard him complain about the latest Forbes rankings of the most powerful people in the world. Trump makes the list, but he's in the No. 2 spot. No. 1 is Russian president Vladimir Putin. But then, for some reason, Trump has never seemed to feel the same sense of macho competitiveness with Putin that he's shown toward other people.  In fact, Trump has been defensive of him, almost submissive. Considering his usual aggressive, macho behavior, that is very much out of character.

Throughout this campaign and since the election, Trump has extolled the virtues of Putin, showing none of his usual bellicose bravado or nationalist fervor. He didn't seem to know that Russia had invaded Ukraine and when corrected said that he believed it was a welcome invasion. When confronted with the fact that Putin stands accused of killing reporters and and political rivals he responded by saying, "Our country does plenty of killing also." He later joked on the campaign trail about following Putin's lead and killing journalists himself. He goes out of his way to call the Russian leader "strong," Trump's highest compliment.

Today Trump says that he and Putin have never met, but in this TV interview taped in Moscow in November 2013, Trump said he has a relationship with the Russian president and that he assumed Putin would be watching. Trump often compliments Putin for his "popularity"and throughout the campaign he has insisted, in spite of growing evidence to the contrary, that there is no reason to believe that the Russian government is responsible for the infiltration of Democratic Party and Clinton staffers' computers. Indeed, Trump is so adamant about this that he's pretty much accused his own government of lying about it. That is an extreme reaction and one that seems inexplicable for an incoming president.

Trump's attitude toward Putin has always been at odds with his usual style and tone. Because of that and the strange circumstances surrounding Trump's hiring of Paul Manafort, a man with deep connections to Russian allies, the strange behavior of "Trump surrogates" at the Republican platform committee drafting sanctions policy toward Russia and Trump's dismissive and often cavalier attitude toward evidence that Russia tried to interfere in the presidential election, serious questions are now being raised.

Yesterday it was reported that United States intelligence officials now have a high level of confidence that Vladimir Putin himself was involved in the operation aimed at disrupting the election. Trump's behavior toward the Russian president has been so out of character that it was only a matter of time before people began to ask, "What did the president-elect know, and when did he know it?"