Brian Cox, star of "The Autopsy of Jane Doe," on the work: "It can be quite brutal actually" 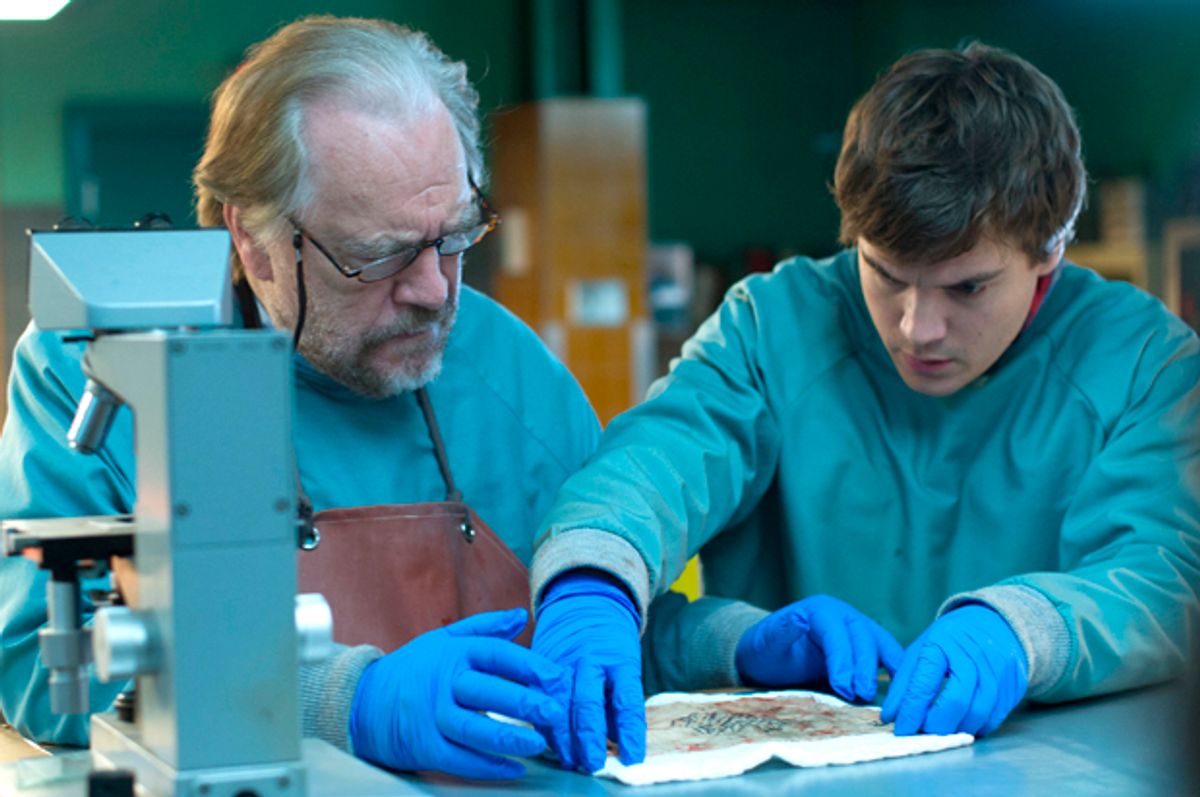 Brian Cox may be best known for playing unsavory characters — two of his most famous roles are Hannibal “the Cannibal” Lecter (in the 1986 film, “Manhunter”), and Big John Harrington, a pederast in “L.I.E.” However, in the new mystery/thriller “The Autopsy of Jane Doe,” Cox plays Tommy Tilden, a seasoned coroner who encounters some unsavory things.

In this engrossing film — and the emphasis, at times, is on gross — Tommy is training his son, Austin (Emile Hirsch) to take over the generations-old family business. One night, when the titular corpse is delivered to the Tilden’s basement facility, the father and son must determine the cause of death.

As Tommy starts the four-part autopsy, he discovers some strange features: The woman’s wrists and ankles were shattered, her internal organs were scarred, and her eyes are a peculiar shade of gray. What caused all these irregularities? As the coroners literally dig further into the corpse, the mystery deepens, until the film provides a satisfying (and for some, terrifying) answer.

Cox is fantastic in the lead role, providing a sense of calm and reason as his investigation becomes more unsettling. The actor spoke with Salon about dead bodies, secrets, and death as well as making “The Autopsy of Jane Doe.”

About 20-25 years ago, my best friend, who was a pathologist, asked me to come observe an autopsy she was conducting. I foolishly declined. Did you attend any autopsies as research for this role?

Emile is so much braver than I am. He attended autopsies in Los Angeles. I prefer to imagine. I have a great streak of squeamishness at cutting up bodies. I don’t know that I would last very long. Emile said he couldn’t believe there were 50 bodies in the room when he attended. I said, “How did you do it?” I couldn’t do it. I used my imagination, which can be scarier than reality sometimes.

What do you recall about seeing your first dead body?

I’ve had close relatives die. It’s an extraordinary thing when a spirit leaves the body and what’s left behind is the body. That’s something else, when life is no longer there and you’re very much aware of it. Breathing your last breath. I saw my brother-in-law die. It was very humbling.

Pathologists and coroners have a real macabre sensibility about that kind of thing. They are not squeamish at all. They are quite . . . well, any belief system flies out the window. It’s just becomes the body. It can be quite brutal actually. Certainly, even with our girl [Olwen Kelly, who plays Jane Doe], she was astonishing. She managed to develop this shallow breathing. When we started shooting she was a beautiful girl lying on the slab. But she eventually became this cadaver. It was quite eerie actually. It was like she was a piece of meat we hacked into and examined. The dehumanizing aspect of it is quite something, but it’s a paradox; there’s something human about it.

What was it like to perform all of the surgical acts in the film, slicing the naked corpse of Jane Doe, and removing the organs, the skull, etc?

When you make the cut, they teach you about how you cut the body. We lived with this, because of “CSI” — people are so much more exposed to it than they were 20 years ago. There’s that sense of the routine and the procedural nature. You follow it and one thing facilitates another. You examine each organ and what you’re looking for. “Jane Doe” is an unexplained death. The markings aren’t on her but inside her. I was particularly surprised by [coroners]. I thought we’d be in masks, and the coroner [who consulted] said he never wears a mask, and sometimes not even rubber gloves. It is a cadaver, and it’s hard to describe the feeling. There’s a kind of callous nature about that which was human and what the coroner does. It’s clinical. Of course, we’re reminded constantly of our own humanness. What we’re left with in terms of our bodies and what happens to them eventually. It’s challenging in that way.

You tend to play characters that are calm under pressure. Can you talk about that aspect of Tommy in particular and other roles in general? I find even when you are doing despicable things, your sense of confidence, intelligence and conviction makes your character engaging, even trustworthy.

I think it’s the degree of commitment to what you play and the action you are doing, even when you are deceiving people. It’s ultimately all pretending but at different levels. There’s a life going on, and Tommy has a tragedy in his life. He has a relationship with his son who does not want to carry on this family tradition but Tommy never questioned that; he just got into it. He’s starting to question decisions in his life, and things are not looking as viable as they had been up to that point.

Characters always have to have secrets. They are not necessarily revealed. But what makes you watch a character is that they have something you can’t quite get — but you know that something’s there. As an actor, my job is to find the character’s secret and use that to intrigue the audience. There’s an integrity involved.

Yes! And Tommy even tells his son, “Every body has a secret. Some are better at hiding them.” What is a secret you have kept hidden?

My secret is the enjoyment of my job. It’s also . . . a lot of things. I think what we actors do — the ritual of seeing a movie, or a play, or even a radio program -- is create a relationship to the audience. It’s performing an act. It’s expiation for the audience. It’s necessary, and why the arts are important. It was created to respect humanity and what makes us human. A great performance touches us because we recognize it. [Movies] underestimate what audiences really want. Audiences can’t articulate it emotionally and spiritually. That’s the art of radio, TV, film, music and painting; it’s something that says a lot about the human spirit. We actors are like lay priests in that way.

There is an interesting father-son relationship in the film. What observations do you have about guilt and the sins of the father and the legacy of family?

The family is very important for the story and the characters find themselves at a crossroads because of the mutual tragedy they experienced. They [work toward] an understanding, but there’s a lot of unsaid, unresolved stuff. In a way the allegory of the film is about solving that problem and bringing a resolution to the relationship. It’s what makes it stand out. It’s not a scary horror film. It’s more about madness — like Kubrick captured in “The Shining” — and how it manifests itself in this ghost world.

“The Autopsy of Jane Doe” touches on myths and the supernatural. What are your beliefs about spirits and such?

I am much more skeptical. I’ve had experiences with odd [uncanny] things, and [things that are] difficult to explain, but I’m not persuaded by it. I know something is going on but I'm not sure what it is.

There are multiple ways Jane Doe could have died. What are your thoughts about death?

The most important thing about that is to make a “good death.” Prepare for it. It’s not a morbid thing. A friend of mine has died, just not as well as they might have done. Death’s inevitable. Prepare for that shift.