Expect tough hearings for Rex Tillerson and Jeff Sessions? Forget it — this is the new era of no rules

Once upon a time, nominees were rejected over a nanny's taxes. But consider the guy we just elected president 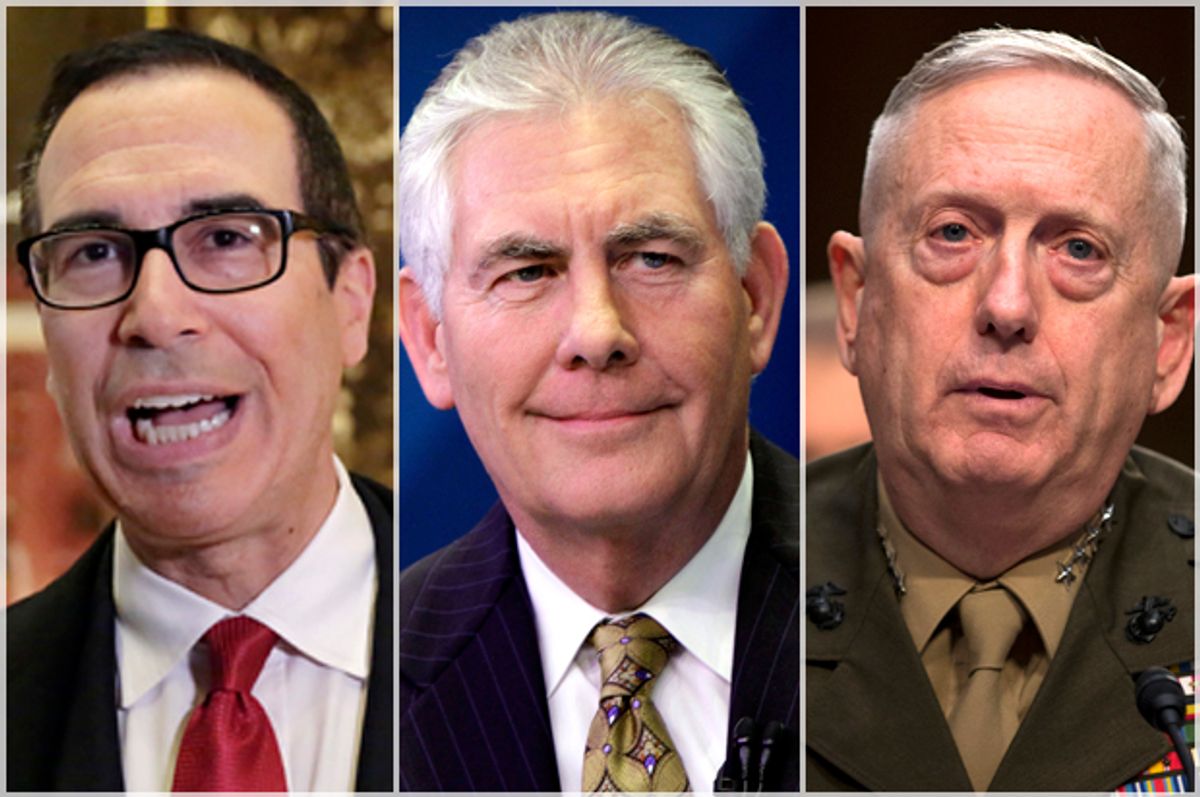 Anyone who is observing this trainwreck of a presidential transition will not be surprised to learn that one of its most important duties is being carried out in slipshod fashion. According to the Wall Street Journal, the interviewing of nominees for the cabinet and other important administration jobs is haphazard at best. Announcements come at the whim of the president-elect, making it very difficult to create what is normally a thematic introduction of the new administration. Donald Trump just throws names out when he feels like it, and nobody has time to prepare the ground with the Senate and gather "sponsors" who will usher the nominees through the hearings and create an orderly process.

The incoming administration is also apparently failing to vet its nominees correctly, which is usually the most important job in the transition. According to the Journal, Trump is announcing his choices "without requiring a review of extensive paperwork about their background and financial records, including tax returns." This is a vital task to ensure that a new administration is not met with any surprises in the hearings. With so many nominees without previous experience in government and so many potential conflicts due to their business careers, this ought to be of particular importance.

And it's not just the newbies who aren't being properly vetted. Even Sen. Jeff Sessions, nominated for attorney general, has raised eyebrows among Senate Judiciary Committee Democrats by refusing to give answers or provide material in response to the standard questionnaire. When the committee followed up, he still failed to provide the information they requested, which may not be surprising, since Sessions was famously denied a federal judgeship due to a troubling racist history turned up by this same committee in the 1980s.

One would assume Sessions might have learned his lesson since then, but committee Democrats and groups like People for the American Way are justifiably concerned that he has failed to provide records of any speeches, Op-Eds or interviews prior to 1998, specifically on touchy subjects like immigration. The senior Democrat on the committee, Sen. Dianne Feinstein, has requested that Sessions' confirmation be postponed until he provides all the requested material. So far, there is little reason to believe that's going to happen.

In years past, this lackadaisical vetting process might well have ended with a nominee forced to withdraw, or even a possible rejection. Back in 1989, President George H.W. Bush nominated John Tower, a longtime Texas senator and chairman of the Armed Services Committee, to be his secretary of defense. Being a member of the club, everyone assumed he'd be easily confirmed but it turned out that Tower was known as an excessive drinker and womanizer and he was voted down 53-47.

A few years later, President Bill Clinton nominated lawyer Zoe Baird to be the first female attorney general, and she was forced to withdraw when it was revealed that she had hired an undocumented nanny and failed to pay Social Security taxes for her in a timely manner. His next nominee, Kimba Wood, was also quickly withdrawn when it turned out she had also employed an undocumented nanny, although she'd paid the required taxes. The press was in a frenzy for weeks over all this, even dubbing it "Nannygate." Clinton finally was able to seat the first female A.G. by finding a nominee who had no children, Janet Reno.

When President Obama named former Senate majority leader Tom Daschle as Secretary of Health and Human Services in 2009, his nomination was derailed when it was found that Daschle hadn't reported income on one of the required forms, and had failed to pay some taxes on a car and driver that had been provided for him. He paid them late, but the Republicans called for the fainting couch and Daschle was forced to withdraw as well.

The upshot is that cabinet nominees are supposed to be squeaky clean, and under normal circumstances any slight problem with their financial records or their personal behavior can be lethal. So far there have been some grumblings among Republican senators about Rex Tillerson, the Exxon CEO Trump has chosen to be secretary of state, largely because of Tillerson's business ties to Russian president Vladimir Putin. So members of the media are breathlessly anticipating grueling hearings.

But why? We just elected a president who insulted POWs and Gold Star parents, who talked about his penis on national television and was heard on tape bragging about grabbing women by the crotch. He is an admitted fraud who refuses to divulge his taxes. His conflicts of interest, and those of his family, are unprecedented. It is clear that the FBI stepped into the election in the final days on his behalf, and we are now embroiled in a global scandal and potential national security crisis due to evidence that Vladimir Putin himself intervened in the election to help Trump win the election.

Yet somehow we are supposed to believe that the GOP Congress, and by extension their voters, will find something disqualifying about Trump's cabinet choices? Sure, there are conflict-of-interest laws that apply to people who aren't the president. Even so, how can anyone demand that a cabinet official release his financial information when the president, a billionaire with potential conflicts all over the world, has refused to? What personal misdeeds could possibly top what we know about Donald Trump's predatory activities? The idea that hiring an undocumented nanny could be disqualifying when Trump has employed thousands of undocumented immigrants as construction workers or hotel staff is laughable. Sure the Democrats will bring these matters up, but it's highly doubtful that the GOP majority will deny any appointment. They only apply such double standards to Democrats.

Yesterday it was reported that Trump has decided not to divest himself of his business, and that his team has found a "loophole" in the nepotism laws that make it illegal for his family to be directly involved in his administration. So let's not kid ourselves. We have crossed into new territory in which there are no rules, and barely any laws, constraining the presidency. Whatever fireworks may happen at the confirmation hearings will all be for the reality show we now call politics.