Republicans have no leverage over Democrats on Obamacare repeal, no replacement plan and no exit strategy 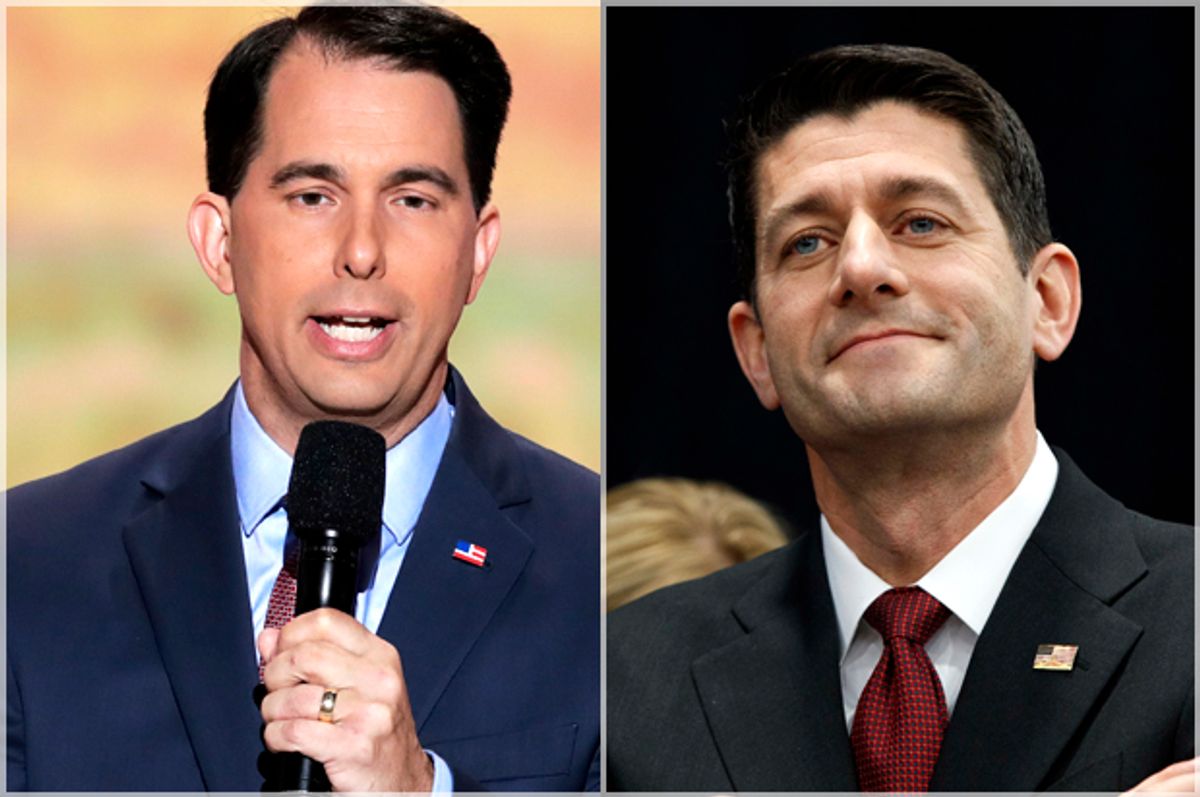 To get a good sense of where congressional Republicans are when it comes to repealing and replacing the Affordable Care Act, check out this Politico piece published Thursday on the “powerful leverage” the party will have over Senate Democrats in coming up with a replacement plan that can defeat a filibuster. It notes that Republicans are looking to “pick off” vulnerable incumbents who are up for reelection in 2018, like Missouri’s Claire McCaskill and Angus King of Maine (an independent who caucuses with the Dems), and who might work with the GOP to pass a healthcare plan because they “won’t risk being blamed for millions of Americans losing their insurance.”

I tend to agree with Greg Sargent at the Washington Post, who finds this strategy to be laughable. If anything, the fact that Republicans are already trying to grub for Democratic support is a sign that a Republican-led repeal of the Affordable Care Act will not be followed by a “replacement” of any real value.

First off, it will be difficult for Republicans to blame Democrats for the massive coverage loss that will attend Obamacare’s repeal if no Democrats actually vote for repeal. Despite lofty promises to the contrary, even a delayed implementation of Obamacare’s repeal will be disruptive for insurance markets and individuals, not to mention a politically fraught exercise for the Republicans who force it through to President Trump’s desk.

Let’s go all the way back to mid-2015 and the short-lived, ill-fated presidential campaign of Scott Walker, the Republican governor of Wisconsin. That August, Walker made a big splash by being the first of the top-tier GOP presidential candidates to release his own health care plan. It was a standard mishmash of Republican health policy ideas: tax credits for people to help buy insurance, permitting the sale of insurance across state lines, federally funded high-risk pools, health savings accounts and the like.

It was a proposal that was intended to replace Obamacare while being as minimally disruptive as possible. As conservative journalist Philip Klein wrote at the time, Walker “rejected an ideologically purer alternative in favor of a plan that he hopes will prove more politically viable by extending coverage to a wider cross-section of people than rival Republican plans.” Liberals hated the plan because it would still screw over a lot of people who gained coverage under the ACA. Hardline conservatives hated the plan because it used federal money to help people buy insurance. The Walker plan, like the Walker candidacy, went nowhere.

Therein lies the problem for the GOP. Any plan that would be sufficiently moderate enough to pick off vulnerable Democratic senators would be unacceptable to more conservative members of Congress, who will not be eager to violate their so-called principles just to convince Angus King to get on board.

Consider, for example, Sen. Ted Cruz, R-Texas, who is also coming up for reelection in 2018 and has been known to pick an intra-party fight or two during his short tenure in Congress. The Cruz vision for health care reform is straightforward and uncomplicated: Repeal Obamacare and then let the Invisible Hand of the marketplace sort things out. When Obamacare subsidies were under threat from the Supreme Court in 2015, Cruz indicated that he was perfectly happy to let the law collapse rather than try to pass one of the many Republican “off-ramp” proposals. Cruz’s entire political identity is built around the rejection of pragmatism and compromise in favor of ideological purity. Do we really believe he’s going to change his spots now?

As Sargent notes, the scenario sketched out above actually gives the Democrats some leverage, as they can insist that any cooperation they might offer is contingent upon finding ways to preserve the ACA’s historic expansion of health coverage. To get there, Republicans would have to bend -- but if they bend, they risk alienating their own allies.

It has all the appearances of a political Gordian knot, which is why Republican leaders in Congress are barely even pretending to talk about what a replacement plan might look like. Instead they’re just barreling forward on repeal and telling everyone that a new healthcare plan will arise through some uncertain mixture of luck, political pressure and necessity. It’s a wildly irresponsible strategy, and there’s a good chance it won’t result in any sort of meaningful replacement for the Affordable Care Act.