Happy New Year, rich people! Donald Trump, Paul Ryan and Congress will make sure 2017 will be terrific for the super-wealthy

Big tax cuts are in store for the first few months of 2017, the vast majority of which will benefit the rich 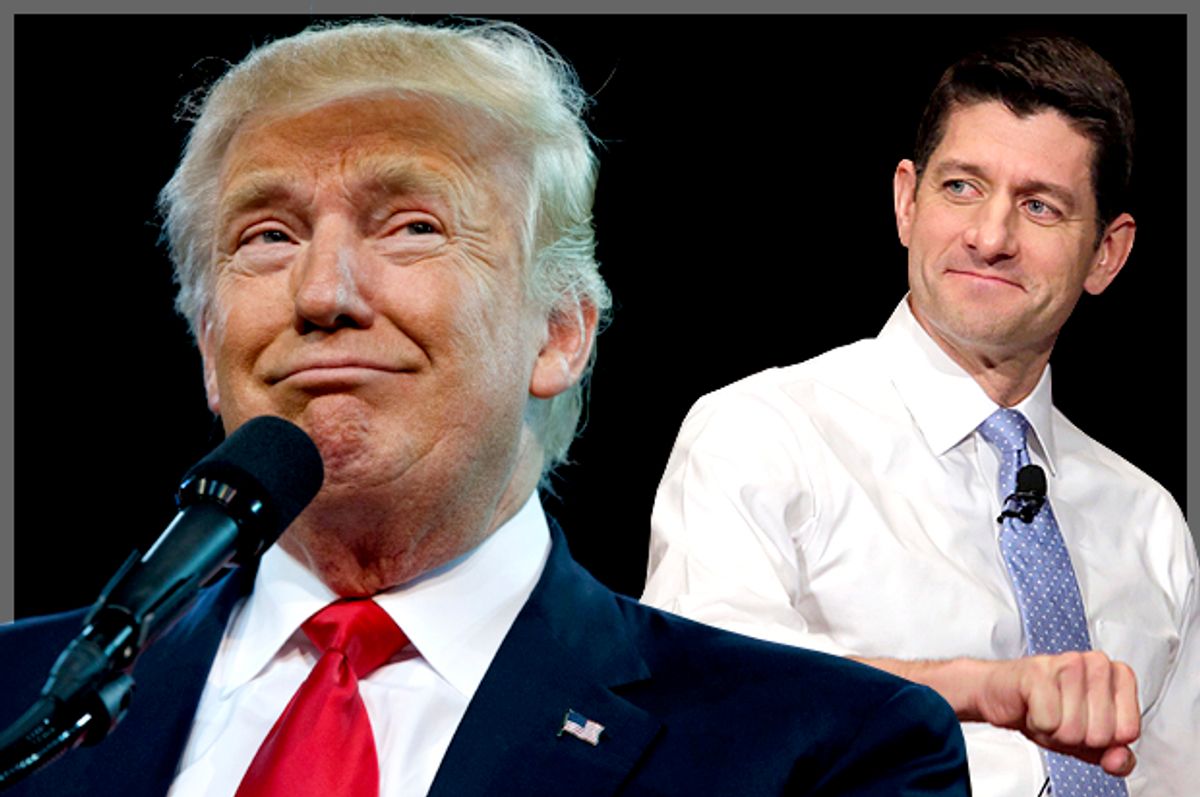 Donald Trump will be inaugurated president of the United States on Jan. 20, cementing Republican control of the executive and legislative branches of government. And while Treasury secretary nominee Steven Mnuchin has promised that no rich people will see their taxes cut, Trump and the congressional Republicans are nonetheless teeing up some tremendously large tax cuts for high earners as their first orders of business.

The first tax cut for the rich will likely come in the form of the long-promised legislation to repeal the Affordable Care Act. Republicans in Congress have been making noises about delaying the implementation of some aspects of the repeal to ward off the complete collapse of the individual insurance market, but they want to get rid of the tax increases that fund Obamacare right away.

Stripped down to its essence, Obamacare is a program to redistribute wealth from the rich to the poor. Low-income people get tax subsidies from the government to help pay for health insurance, and those subsidies are funded, in part, by tax hikes on the wealthy. Those include a 0.9 percent tax on wages and a 3.8 percent tax on investment income that only kick in above certain income thresholds ($200,000 for single filers, $250,000 for joint filers). Those two taxes account for nearly $350 billion in revenue, and eliminating them will send that money back into the pockets of the rich.

And while the rich get a guaranteed tax cut, everyone at the bottom of the economic ladder gets thrown into purgatory. If the Republicans fail to come up with a replacement plan for Obamacare during the “delay” period following repeal (which looks increasingly likely), low- and middle-income households will be staring down an average tax increase of nearly $6,000 as their insurance subsidies dry up.

The next big tax bonanza for the rich will likely come via the tax reform proposal congressional Republicans are working feverishly to fast-track for the new year. It’s not yet entirely clear what those proposals will look like, but it feels safe to use Speaker Paul Ryan’s “Better Way” agenda as a template for what the GOP has in mind. Ryan’s been promoting the agenda as a way to “simplify” the tax code, but it’s really just more oversized cuts that benefit high-earners.

Under the Ryan “Better Way” plan, middle-income families get a tax cut of — wait for the brass fanfare — 60 dollars. Meanwhile, the lucky duckies at the tip-top of the income ladder — the top one percent, with incomes above $770,000 per year — would receive an average tax cut of $239,000. All told, a full 99.6 percent of the cuts under the Ryan “Better Way” plan get funneled to that top one percent of earners, with the rest of America left to divide the paltry remainder among themselves. When you take into account the fact that the Republicans are also planning to go to war on the welfare state, it seems likely that whatever miniscule tax benefit low earners could see from the Republican tax plan would be more than canceled out by, say, cuts to the Supplemental Nutrition Assistance Program or Medicaid.

And who knows what else they’re cooking up. Obamacare repeal and tax reform are just items one and two on the 2017 agenda for Republican-controlled government. Assuming they both get pushed through Congress via budget reconciliation, they’ll make it to President Trump’s desk and be signed into law. Rich people will get their tax bills slashed while everyone else will get their benefits cut and see their health coverage put at risk.

But hey, at least a few Carrier jobs in Indiana were saved. Sort of.