"The Man in the High Castle" season 2: an alternate "then" only slightly removed from our "now" 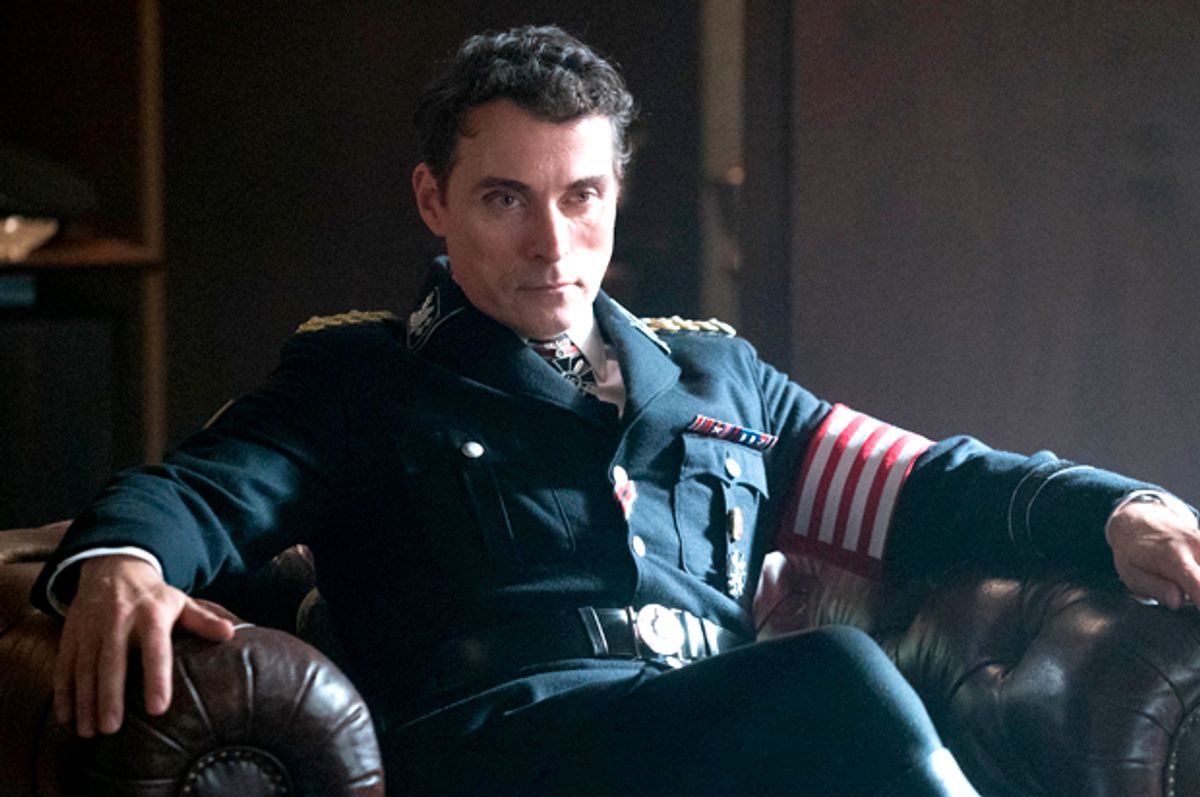 A year ago, when the first season of Amazon’s “The Man in the High Castle” premiered, people could watch while feeling secure in the notion that its dystopian story was pure fantasy.

The drama’s alternate timeline, which provides a look at what America would look like if Adolf Hitler had won World War II, looks enough like the popular visions of 1962 America to be disconcerting, regardless of the times. As someone who hasn’t read the Philip K. Dick novel that inspired the series, season 1 of “Man in the High Castle” struck me as a work of midcentury modernism with the addition of swastikas and stylized SS markers. The repugnant iconography is as ubiquitous in its set designs as product logos in public advertising space, which is the point.

Dick’s central critique was that the racially segregated “land of the free” was only a few shades removed from the European fascism we were so proud of smashing in World War II. In Frank Spotnitz’s TV adaptation, Nazi symbolism, philosophy and values slide right into post-war Americana without too many overt differences. The drama’s past is still a familiar America, albeit one with more sinister uniforms.

Even after the election, when Amazon released the trailer for season 2, some of us could still soothe ourselves with denial. “At least we aren't ruled by literal Nazis,” a subhead on a Vulture write-up snarked. That story posted on November 15, only a day or two after Donald Trump named Steve Bannon as his chief adviser, and only a few days before white supremacists would convene and throw up sieg heil salutes only blocks away from the White House.

Maybe these parallels come off as alarmist. The second season of “The Man in the High Castle” rolls out today and is still science fiction, for the moment. Few in its audience are likely to be watching it in order to steel themselves for the battles ahead. Given the fearsome direction in which the country is moving, some may see value in that idea. Then again, following that train of thought makes about as much sense as preparing for a boxing match by punching yourself repeatedly in the face.

But a person simply cannot pretend that watching Amazon’s series right now, in this darkest of timelines, is not a different and more dispiriting experience than it was last November. Even then, “Man in the High Castle” wasn’t the most uplifting of diversions. Now, it answers some questions about plot while stretching thinly written plotlines over many more hours than they merit.

The drama’s title refers to a mysterious character behind a series of banned films that portray the version of America we know, the one in which the allies won the war and America solidified its standing in the world as a force for good and justice. At the center of the story are two unlikely and initially unwilling heroes: Juliana Crain (Alexa Davalos, delivering a much-improved performance this time around) and her lover Frank Frink (Rupert Evans, matching Davalos’ higher energy).

In season 2, the title character is revealed at last as a slightly crazed man named Hawthorne Abendsen, played by character actor Stephen Root. The shaggy Abendsen offers little in the way of additional clarity as to the true purpose these movies, other than to depict how a person’s actions in each film can change depending on their circumstances. A character shown in the first-season finale executing one of the series’ protagonists may nevertheless be integral to saving the world. Or he may be playing everyone, the audience included, as fools.

In both the fictional America and the actual one, hope for a freer world lies in the proliferation of varied perspectives that inspire, educate and warn. In “Man in the High Castle,” the films started out as magical plot coupons, part of a story that only grows more complicated in season 2.

Amazon will have to take that notion seriously, especially since Spotnitz extricated himself from the series midway through season 2. Season 1 did not make it apparent that the story was headed in a specific direction. The second season hints that it may have a destination in mind . . . perhaps. At the very least we learn that that the mysteriously named reel “The Grasshopper Lies Heavy” has a purpose beyond inspiring high-stakes chases and betrayals.

Beyond bolstering resistance efforts, there’s also evidence that the films allow a few people to traverse timelines. Maybe the visualization of a better possibility is enough to alter our collective fates; at the very least, they’re a handy tool to move characters through an expanded, more dangerous world.

Juliana and Frank are torn apart by the totalitarian paranoia of the times during the first season, pulled into the resistance after authoritarian forces kill their family members. The world of “The Man in the High Castle” is an ugly one in which the state-sanctioned cleansing of the terminally ill and the disabled is part of everyday existence, or the near total absence of African-Americans, Latinos, or any citizens of a darker hue in the Japanese-controlled Pacific states or Reich-dominated Eastern seaboard, is just part of life.

Season 2 separates the lovers completely, in part due to Juliana’s faith in the suspicious Joe Blake (Luke Kleintank). Juliana’s decision to save Joe from being assassinated, which she did on the faith that he had changed, makes her an enemy to both the Japanese and the resistance. Joe, meanwhile, is summoned straight back to Berlin.

“The Man in the High Castle” pulls off a number improbable feats as it evolves; it’s hard to think of another series that coaxes the audience to empathize with a devoted fascist, or eventually come to feel some warmth and sympathy for a man who gassed a woman and her children to death at the start of the story.

That’s the sly trick of normalizing evil, I suppose. Spend enough time in a world only a few ticks removed from our own, and the men history painted as unfeeling monsters become human once again, just people rising up to meet the structures and horrors that have risen up around them.

But that empathy, if we indeed have it, is amply earned by the cast’s tremendous work. Rufus Sewell’s portrayal of the cunning Obergruppenführer John Smith, the East Coast Reich leader, evolves significantly this season as he taps into the fear and desperation of his character’s paternal side.

Sewell’s leader is still the guy who kicked an underling off the top of a tall building, but he’s also a vulnerable man whose child has a condition that runs afoul of the regime’s eugenics laws. Cary-Hiroyuki Tagawa and Joel De La Fuente’s performances remain the standouts among the cast, especially Tagawa’s Trade Minister Nobusuke Tagomi, a spiritual man whose desire for a better world manages to link him in a meaningful way to a rosier state of being.

And this is where the supernatural elements of “The Man in the High Castle” come in, concurrently challenging the integrity of the piece while giving it a measure of beauty and soul in a land that’s otherwise clammy with intrigue.

Season 2 of “The Man in the High Castle” comes to us at a time when incoming government officials are openly discussing requiring Muslim citizens to register and preventing immigration based on race and religion. When racist movements thought to represent the political fringes have insinuated themselves into mainstream political discourse. When reports of hate crimes targeting Latinos, blacks, Muslims, women and the LGBTQ community are piling up. The heroic image of America as a fount of liberty and benevolence is crumbling. So yes, it could happen here.

But at this moment, the crueler America of the series is still fiction. Worry and self-injury does not protect us from the future. When -- if -- the matters that have many of us concerned arrive on our doorstep, meeting them with exhaustion helps no one. But maybe the entertainment offered in “The Man in the High Castle” is what’s needed to provoke people to think about what can be done, and what we’re willing to do, to ensure that its version of America remains in the realm of science fiction.