Are we ready for this jelly? Fluorescent jellyfish may help solve our energy crisis 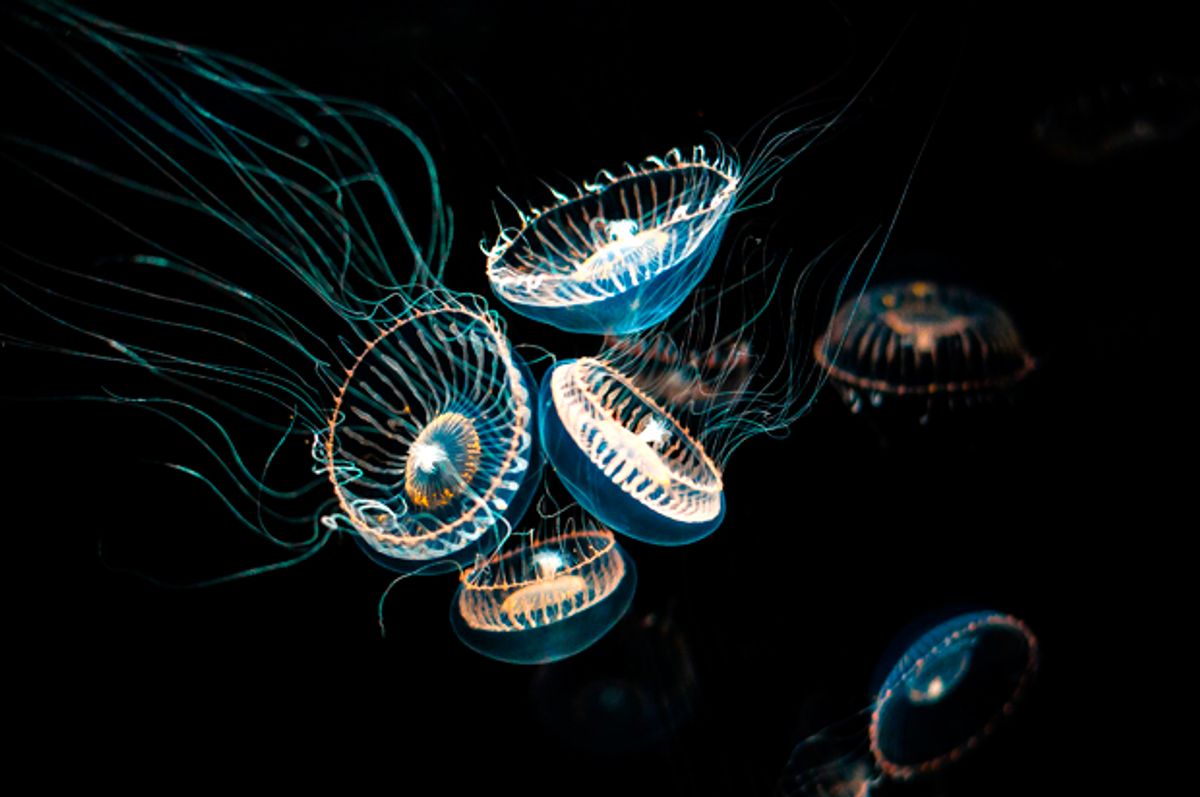 Jellyfish ruin more than your tropical beach vacation. They clog intake pipes at nuclear power stations, capsize fishing boats by weighing down nets, and wage guerrilla warfare on the ecosystem. But scientists have figured out how to use the powers of this tentacled army for good, too. Sustainable solar cells made with jellyfish goo are just one project happening in the field of biosolar, which utilizes biological material to harness the power of the sun. In other words, your life may someday be powered by bacteria, plants, algae and even — in a case of aquatic comeuppance — the gelatinous blobs that spoiled your last swim.

We need the help. Eighty percent of our electricity is currently produced with fossil fuel, and this accounts for one-third of the emissions that are driving climate change. And while traditional solar panels may provide clean, renewable power, large-scale expansion of these devices will face resource-limitation problems. For example, thin film dye sensitized solar cells use ruthenium-containing compounds, but this is a rare (and toxic) metal. Same goes for cadmium and indium. The majority of commercial solar panels are made with silicon, the second most abundant element on the planet, but even these conventional solar cells require silver electrodes. Plus, that silicon has to be converted from sand in an expensive and energy-intensive process.

“Most silicon panels have to run for eight to 10 years before they recover the energy it took to make them,” Barry Bruce, a professor of biochemistry and cellular and molecular biology at the University of Tennessee and a biosolar pioneer, told Salon. “So there’s room for improvement.”

Additionally, most commercial solar panels operate at less than 15 to 20 percent efficiency. When particles of light from the sun hit a panel’s cells, electrons are knocked free from their atoms, leaving a hole. Then these electrons and holes travel in opposite directions across the device, until they meet with electrodes and an electric current is generated. But most of the time, these electrons don’t make it all the way — they fall into empty holes left by other migrating electrons, and all that’s produced is heat.

But when nature — say, a spinach leaf, piece of seaweed or bacterium — converts solar power into usable energy via photosynthesis, it does so with a quantum efficiency of one. In other words, it does it perfectly each time, putting man-made solar panels to shame. Biosolar researchers work to incorporate this ultra-efficient process into hybrid devices that provide clean, affordable and sustainable energy.

Enter the Bruce Lab at the University of Tennessee. Because photosynthesis occurs in the reaction center (or protein complex) of a plant or bacteria, scientists there are looking for ways to extract these reaction centers efficiently and inexpensively, so they can be used in cheap and easily fabricated solar cells. Eventually, it may be possible to make a thick paste of enriched green material -- like a pesto sauce for energy generation -- that can be painted onto sheets of transparent, mylar-like conductive coating and incorporated as part of a solar cell kit for charging low-power devices, like cell phones, LED lights and small refrigerators for storing vaccines. When these devices lose their output, they can simply be cleaned and recoated with local, hand-sourced plant material. Meanwhile, researchers at MIT are working on a type of Betty Crocker Solar Power Cake Mix made from agricultural waste for use in off-grid villages.

“There are two billion people living without electricity right now,” Bruce told Salon. “If they had, say, the light to read at night, they could learn to treat their water, learn to use vaccines, practice birth control, and learn to implement better agricultural practices. We could help overcome the world’s illiteracy obstacle.”

This type of research has long been considered a niche area -- the significant work of no more than 20 labs worldwide. But breakthrough advancements this year are garnering attention. This spring, for the first time, researchers from New York’s Binghamton University were able to assemble nine cyanobacteria-powered solar cells into a solar panel, and the device generated the most wattage of any existing small-scale biosolar cells -- 5.59 microwatts.

This is not a lot. That’s partially because when we combine biological material with non-biological material, we get what Bruce calls a “leaky connection.” According to Binghamton’s website: “A typical traditional solar panel on the roof of a residential house, made up of 60 cells in a 6-by-10 configuration, generates 200 watts of power in a given moment. The cells from this study, in a similar configuration, would generate about .00003726 watts.”

“For the short-term goal, this biosolar technology can be used together with conventional energy harvesting technologies to provide some backup energy even in a cloudy environment or at night -- unlike traditional solar panels, biological solar cells can generate electricity during dark hours from bacterial respiration," said Choi.

Choi says that in the long term, these cells can help deliver self-sustained, self-efficient power.

"Biological systems have the advantages of being self-assembling and self-repairing. Also, they are extremely cheap and environmentally friendly to manufacture and scale up, compared with traditional solar cells. But there is a long way to go," he said. "First of all, the power density must be increased significantly. There are many potential solutions for this. Genetically engineered bacteria will be one of them."

Other researchers have turned to jellyfish for help in optimizing solar cells. Six years ago, Swedish scientist Zackary Chiragwandi put thousands of the Aequorea victoria species in a blender in order to isolate the creature’s green fluorescent protein (GFP) -- i.e., the stuff that makes it glow. When a droplet was placed on an aluminum electrode and exposed to ultraviolet light, an electric current was generated. And while the power derived was very small, it created buzz for its potential to power nanodevices used within the human body for diagnostic purposes. Also, the technique did away with the need for expensive and difficult-to-work-with titanium elements found in Gratzel cells, the solar cells that use dye to mimic plant photosynthesis. Now, scientists are able to grow their own, blender-free GFP.

This year, Iranian researchers built a solar cell using GFP coupled with light-activated proteins from bacteria. The open circuit voltage achieved (690 mV) was “well comparable” to that of traditional dye-sensitized solar cells. According to Iran’s MEHR News Agency: “With further optimization of energy conversion, these cells can replace the older generations of solar cells in the near future.”

So, is it feasible your home might one day run entirely on jellyfish power? “It’s possible,” Chiragwandi told Salon, adding: “I can’t go with more details, because I am still working on it.”

Or, as Bruce told Salon: “This field needs two to 10 times more funding to determine how economically feasible biosolar technology can be. In the meantime, people think this is the stuff of science fiction. It’s not.”