Bad Santa: Why we want to believe in the goodness of fake holiday news stories

'Tis the season for fake Santa news—when jolly old Saint Nick turns out to be a fraud, our collective hearts break 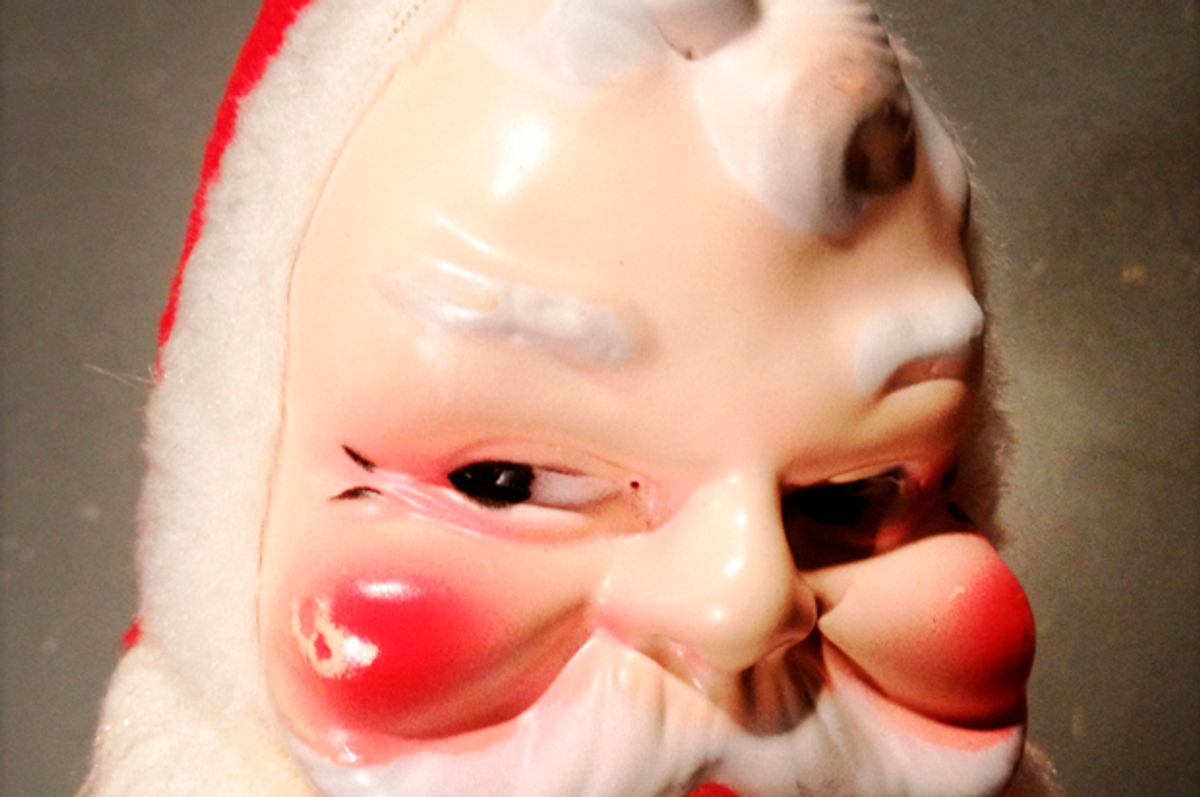 I love those Internet stories that you read in the middle of a crappy day that just make your heart melt. You know the ones: Like Buzzfeed’s recent “33 pictures that show 2016 wasn’t a terrible year,” they make us want to be generous and loving and trusting again after what was, arguably, a pretty terrible year. We lost Prince. And Alan Thicke. We had a contentious, mean and weird election. David Bowie left us, too.

But some days, like me, you see a widely shared story about how Santa granted a little boy’s dying wish, and your cold, hardened heart grows a bit. Two days later, when Snopes.com reveals that in fact the story that gave everyone struggling with empty bank accounts or layoffs this holiday season the feels is false, you (and me) are momentarily dejected. Science suggests that our tendency to believe in holiday stories about the goodness of Santa are tied to human desire to create sense out of chaos.

’Tis the Grinchiest of all things to deliberately deceive an audience for personal gain, however, especially during the holidays, when they get so invested in a happy outcome. Fake news as a subject of conversation has occupied a lot of airtime these last few months, and around the holidays, the lies just ramp up. This week, there were two bad-good Santa stories. The first one was about 6-foot, 310-pound Eric Schmitt-Matzen, a dude from Tennessee who plays Saint Nick every Christmas.

He told the Knoxville News-Sentinel that on Dec. 12, 2016, he was called to a hospital to visit a dying child, but refused to name the family or hospital. Soon, USA Today picked up the story, and it began to spread around the world. Schmitt-Matzen spread his questionable story farther and farther, and it traveled because, well, we all want to believe in Santa doing good works, even though most of us know he’s not “real.”

Snopes creator David Mikkelson told the Washington Post that stories like this gain momentum because “They generally speak to something that people already believe, or confirm something they want to believe. That’s kind of what people cling to.” And these urban legends peddled in real time as fact resonate widely with different audiences.

Mikkelson’s pursuit of investigating and sometimes disproving stories submitted by Internet users began with an interest in folklore and the psychology of hoaxes. Initially, he said, “everybody started sending us stuff to find out if something is true. So we thought, “OK, they’re telling us this, but how do they know [if our answer is true]?” The conclusion was that indeed, the desire to believe is strong enough to supersede the truth, initially. Like last week, when in a second bad-good Santa story, a mall Santa supposedly beat up a child molester alongside his elves when a girl confided that her stepfather (the molester) was “touching” her.

Now, he or she who easily believes a story published on a website called Thug Life may also be ready to buy a bridge, but at this time of year, when we are being fed sugary-sweet stories of kindness — often intended to invite the opening of one’s wallet — it’s easy to be misled. The source site, Thug Life Videos, is known for viral content alongside fake news, but this story was not flagged as fake by the site. Snopes revealed that the photos used for "mall Santa" were from different, unrelated stories, "and do not show a mall Santa named "Nicholas Cooper" as he is being arrested for beating up "Kris Kane." Instead, the picture of "Santa" getting arrested was taken in 2013 after a protest against Black Friday in Ontario, California... [and] the mugshot of "Kris Kane" actually shows a man who was charged with trespassing in 2012."

According to Live Science magazine, children's belief in Santa is normal and healthy. “The notion of a man who flies around the world in a vehicle drawn by flying hoofed mammals, entering people's homes through their chimneys and delivering presents, all within the span of a single night, is highly improbable, to say the least,” writes Tanya Lewis. But Santa and his power to do good, in the face of child molesters and death, is a compelling and useful myth. It also helps children behave better.

It’s easy to believe stories about Santa, like those about Jesus, because Santa derived from a real person – Saint Nicholas – who was kind to the less fortunate. He became famous for giving gifts and money to the poor. "It's a real story, it's a real value and it's something that inspires children," Dr. Matthew Lorber, a child psychiatrist at New York’s Lenox Hill Hospital, told Live Science. “That's the spirit of Christmas, though today's consumer culture may have drifted from that spirit a bit.”

But why adults? Why are we so easily misled by stories of kindness about make-believe beings? Because there’s a part of us that never grows up. Chris Boyle, a psychologist at the University of Exeter, co-wrote an article in this month’s Lancet Psychiatry Journal on the ethics of lies we tell children, and ourselves. Boyle and his co-author Kathy McKay argue that perpetuating the lie of Santa Claus can directly, negatively affect the relationship between parents and children — the latter of whom may never trust their parents again after the truth is revealed.

Humans function in a herd mentality of belief, even if the theory makes no sense. And studies support that as grown-ups, we still want to believe in magic, even though we are conditioned not to by reality. “We’re trying to hark back to our glory days as children,” Boyle recently told The Guardian.

Science over and over supports the human search for meaning, especially during challenging times, and this extends to both adults and children. A 2008 study in Science (Vol. 322, No. 5898) by Jennifer Whitson, PhD, and Adam Galinsky, PhD, showed that participants sought to find patterns in random assortments of dots if they were told no pattern existed. In day-to-day life, this points to a search for meaning in things that make no sense, including the supernatural and Santa Claus. So next time you read a story that sounds specious, even from a reputable news source, you have two choices. Believe with all your glowing heart — until the story is disproven — or remain as jaded over the holiday season as you may be the rest of the year.