Degeneration nation: It takes a village of idiots to raise a kakistocracy like Donald Trump's 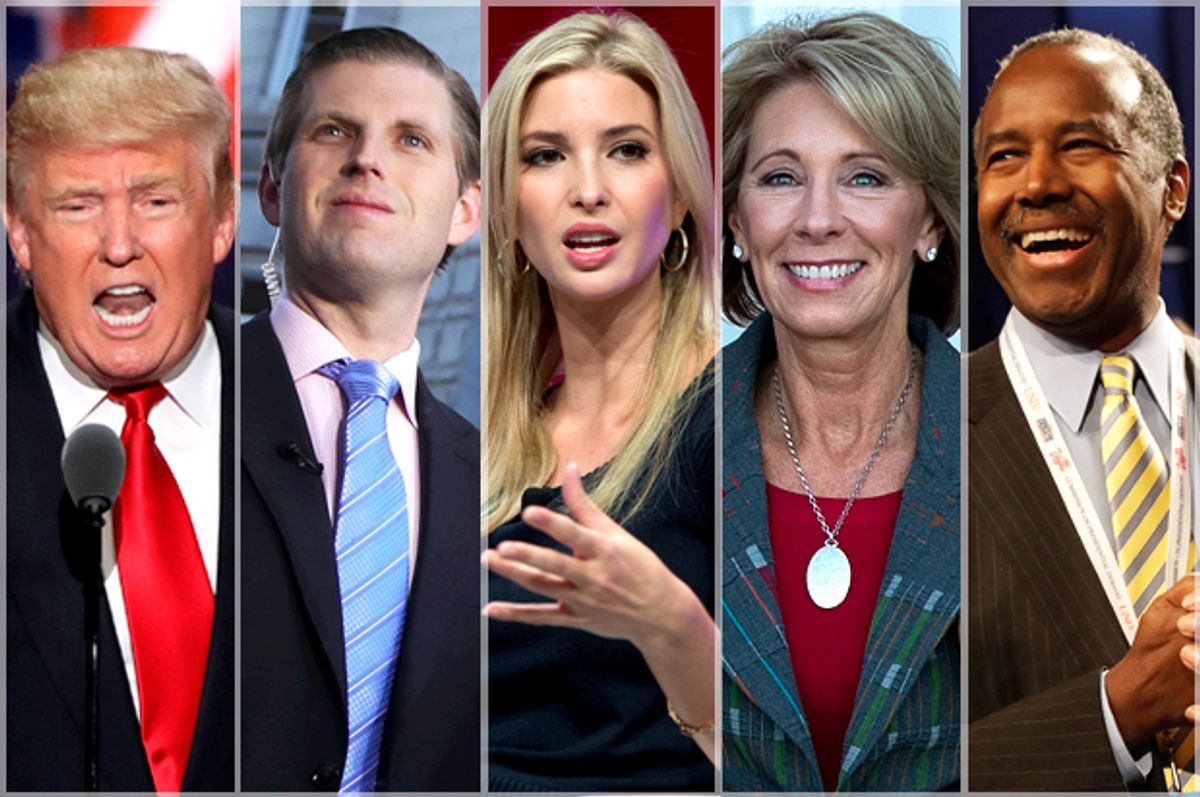 Ever since Donald Trump launched his campaign last year we have searched for the right word to define the sort of government he would lead. Would it be populist or fascist? Would he be a demagogue or a dictator? Would he be the first reality TV president? Would his new administration be an oligarchy, a plutocracy, or a kleptocracy?

Now that he has been elected and he and his minions are busily filling slots in the cabinet and government, we now have an answer to what form of government he will lead.  And the answer is all of the above.

The word’s first known appearance was in 1829 in “The Misfortunes of Elphin,” written by the English satirical writer Thomas Love Peacock. In the United States the word is first recorded from American poet James Russell Lowell, who wrote in a letter in 1876: “Is ours a government of the people, by the people, for the people, or a kakistocracy rather, for the benefit of knaves at the cost of fools?”

Lowell nails our current situation just right. We are indeed on the verge of a government for the benefit of knaves at the cost of fools. While there are rumblings that the Electoral College might shift course and find an alternative to a Trump administration, the chances of that outcome seem relatively low.

Meanwhile the news from the transition team is only worse every day. The folks the Trump team is tapping to fill government posts are literally the worst of the worst.

We have nominees with zero experience of any relevant kind. Like Rex Tillerson, the CEO of ExxonMobil, who has been tapped for secretary of state. Not only does he have absolutely no experience with diplomacy, he may also have troubling ties to Vladimir Putin. Then there is Ben Carson for Secretary of Housing and Urban Development, perhaps one of the weirdest choices given that Carson has no relevant experience and earlier stated he did not want to work in government —even though he did run for president.

Then there are the appointees who have been tapped to lead organizations they openly disdain. Secretary of Education pick Betsy DeVos has derided public education, favoring school choice and vouchers instead. Rick Perry ran for office on a platform that included closing the Department of Energy. Now he has been named to lead it.

But more important than a rundown of each of these horrible choices is the bigger picture. The Trump cabinet picks have more wealth than a third of American households combined. They are also the most conservative. The picks are very white and very male — only three of his choices thus far are not white guys. They are also collectively the least experienced crowd assembled to run major federal agencies in modern history. In fact, the majority of the picks have no related experience of any kind.

But it isn’t only that there is a collective lack of experience and a pattern of oligarchy. It is also that the picks tend to be similar in character to the president-elect himself: egotistical, megalomaniacal, bumbling liars. Michael T. Flynn, the retired Army general tapped to serve as national security adviser in the Trump White House, who once led chants to “lock her up,” “inappropriately shared” classified information with foreign military officers in Afghanistan. It’s an example of Trump-like hubris that is a signature trademark of the administration he is assembling.

The Hill reports that the picks are refreshing for many conservatives who are anti-establishment and skeptical about government insiders: “Even as Democrats and liberals prepare to fight rearguard actions against nominees they believe will gut the federal government and lay waste to important safeguards, conservatives are cheering Trump on.”

The Hill has called the picks “unorthodox,” but really it is kakistocratic. It’s one thing to pick leaders who are outsiders or fresh faces, but that is not what is happening here, and any effort to rationalize it is just outright delusional.

It’s almost like the era of fake news brought us a fake government. Just like the pernicious effects of a population that has come to believe that the fake news is real, we are frighteningly close to a world where the population is poised to accept “fake” leaders as the real deal.

But there’s another piece to this and that is the role that Trump is giving to his adult children. Ivanka has participated in conversations between Trump and world leaders and she may even take over the First Lady role and have an office along with her husband Jared Kushner in the White House. Just this week Trump said his sons, Donald Jr. and Eric, would run his company and that he would create a wall between him and his businesses. The very next day his children had seats at the table of one of his biggest policy meetings yet, which included the country’s top tech-industry elites and Trump nominees. Also around the table were bottles of Trump Natural Spring Water, the president-elect’s water brand.

It’s like they can’t understand what the words “conflict of interest” mean.

Bear in mind, too, that it took a whole village of idiots to set up that meeting and approve of the attendees. Clearly no one was willing to point out that the kids who were set to run the Trump empire shouldn’t be there. Nor was anyone willing to swap the Trump water for another brand.

All of this means that we need to rescue a word that is more relevant today than ever. As Amro Ali explains in a piece calling for a revival of the term “kakistrocracy”: “In a world where stupidity penetrates multiple levels of government, policies and personalities; it is strange that the term coined to best describe it has actually ended up in the endangered and forgotten words books.”

The key for Ali is that kakistocracy is not only a term that captures rule by the “stupid” and the “worst;” it also describes a desire to push “human relationships, that form the controlling governmental machinery, into a degenerative state.”

Forbes contributor Michael Lewitt reminds us that “kakistocracy” should be used to describe a state or government run by the most unscrupulous or unsuitable people: “Corrupt, dishonest and incompetent politicians, regulators and bureaucrats were put in charge by self-absorbed, selfish and ignorant citizens.” He goes on to acknowledge that we are probably not the first society to consider our leaders as part of a kakistocracy, but the problems with the Trump team go beyond perception.

The word kakistocracy comes to us from Greek. Kakistos means “worst,” which is superlative of kakos — “bad” — and if it sounds like shit, that’s because it is.

Kakistrocracy is simply the best umbrella term for the form of government we are heading into. It aptly combines the realities of a team that represents nepotism, oligarchy, plutocracy, kleptocracy, demagoguery, alt-right values and a disturbing tendency toward fascist white nationalism.

I suppose it could be worse. Rational Wiki lists 41 types of government; among them is a capracracy, or rule by goats. Goats could be worse. Although considering the slate of folks in line to run our government starting next year, we might all end up wishing they were goats instead.