Aleppo and the empathy gap: We read the tweets, but did nothing while a city died 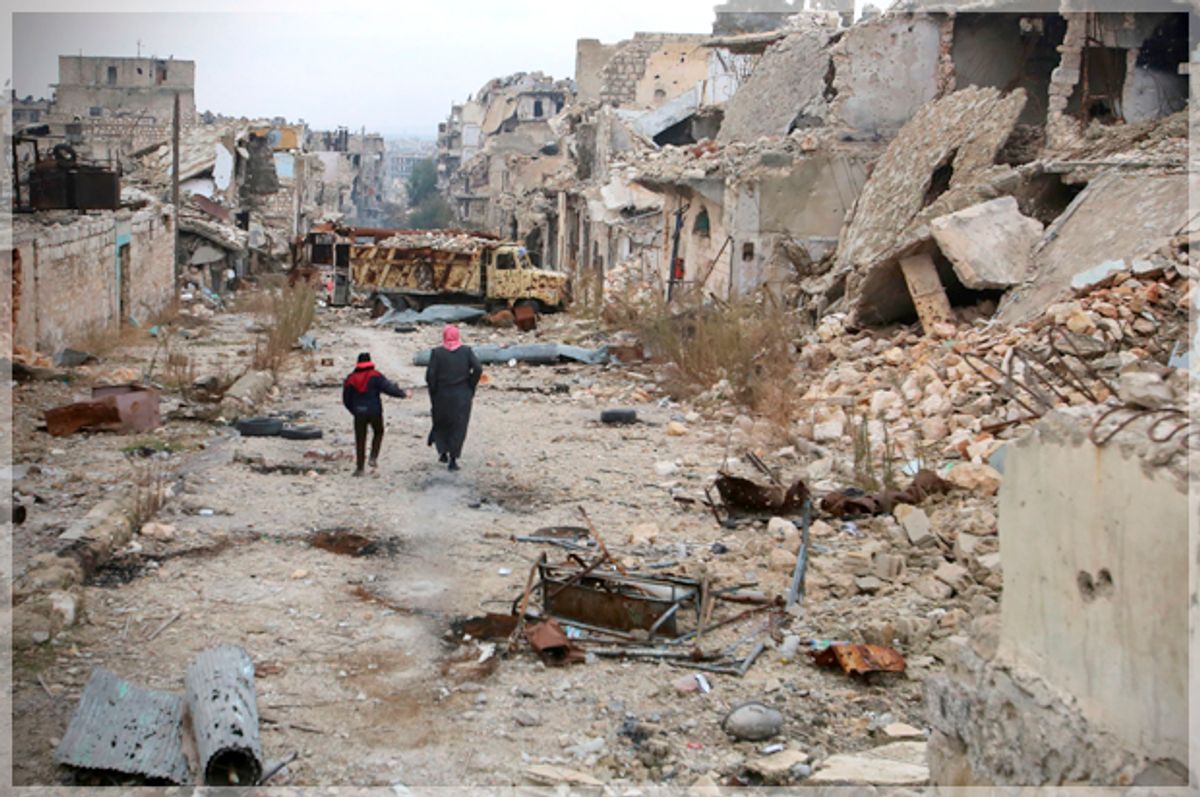 It's difficult not to write about the Syrian city of Aleppo in the past tense, because what remains is little more than an apparition. Few vestiges are left of its glorious 5,000-year history that compelled even Shakespeare to mention it in his works. Now, the screams of innocent civilians echo throughout the city's vast ruins. For a world that was deaf to Aleppo’s incessant pleas for help, these bodies will forever serve as unimpeachable proof of its complicity.

The battle of Aleppo, which began in 2012, is now over. Bolstered by Russian airstrikes and Iranian-backed militias, the government forces of President Bashar al-Assad have overcome a ragtag of opposition rebels in eastern Aleppo at an unconscionable cost.

It is estimated that between 200,000 and 300,000 people were trapped in this part of the city during the siege. As scores were killed summarily in their homes or as they attempted to flee the area, those who remained alive made preparations for death. Women chose suicide over the possibility of being raped by Assad’s men, while others in Aleppo took to social media to say farewell.

In a video posted by Aleppo Today TV, a 10-year-old named Yasmeen Qanouz asked to be rescued from her orphanage. “We want to live like everyone else,” she said. The horrors of this carnage were tweeted live to the international community by a 7-year-old Syrian girl named Bana Alabed (known as the Anne Frank of the Syrian civil war) and her mother, Fatemeh. Through her tweets, Bana shared her fears with the world, beseeched it for mercy and became dismayed after learning that humanity was capable of ignoring a child’s plea for life. On Dec. 14, an indignant Fatemeh asked, “Dear world, there's intense bombing right now. Why are you silent? Why? Why? Why? Fear is killing me & my kids.”

Though there have been fleeting moments of compassion, sympathy for Syria has never been sustained enough to sufficiently roil a global audience. The image of a drowned toddler named Aylan Kurdi -- washed ashore in Turkey as he tried to flee Syria for Greece with his family -- stirred emotions during the refugee crisis of September 2015. Later in August 2016, the picture of an ash-covered boy named Omran Daqneesh from Aleppo appalled many. But photos apparently have a short shelf life and don’t cause the seismic changes necessary to alter geopolitics or cure our compassion fatigue.

There were hopes that the 2016 U.S. presidential election would provide something meaningful on Syria, but those quickly dissipated when Donald Trump’s personality became the focus over his policies. Donald Trump Jr. reduced the humanity of Syrian refugees to Skittles and his father found a new bogeyman in them. It’s tragic when the lingering memory of Aleppo from this election cycle is not a substantive debate on the humanitarian crisis or an impassioned narrative of its suffering. Instead, we will always remember the ignorance of Libertarian nominee Gary Johnson, who, after receiving 4 million-plus plus votes in the election, can perhaps find Aleppo on a map now.

Secretary of State John Kerry and the U.S. government have been at the vanguard of feckless diplomatic efforts to bring relief to Syria’s people. As Seth Frantzman writes, those who peddle only a toothless diplomacy in the face of chemical and gas attacks, forced starvation, airstrikes and barrel bombs “surrender to regimes that cause great human suffering, millions of refugees, extremism and long-term instability.” For Russia, there were only interests in Syria and little desire for missionary work. The Kremlin had to ensure that Assad, its chief Arab ally, would endure and that its Mediterranean port was secure. And so in the end, Aleppo watched as America dithered and made calls for a ceasefire that were answered only with more carnage.

Complicating America’s position further was Putin and Assad’s embrace of Donald Trump, who is viewed as a “natural ally” by the Syrian president. Further, Peter Beinart of The Atlantic writes that the rapprochement between Trump’s Republican Party and Russia is undergirded by the belief that Putin’s Russia is “Christianity’s front line against the new civilizational enemy: Islam.” All of this appears to be little more than a dalliance between Trump and the tormentors of Syria’s people.

This alliance threatens to push President-elect Trump’s foreign policy further away from Syria’s downtrodden and dispossessed at a time when deeper American engagement is essential. As Century Foundation fellow Sam Heller writes: “Syria’s war has already deformed Syrian society and the broader Middle East. Many of the war’s destructive effects — in particular, the physical and psychological damage done to the Syrian people — are impossible to fully reverse. But what is done to alleviate and mitigate them will be hugely important both in human terms and for the future stability of the region.”

A level of opprobrium commensurate to the death of more than 400,000 Syrians has never emerged. Perhaps we are constrained by our brains, wired to empathize with the suffering of those who appear more relatable and similar to us. Yet Aleppo happened in a world that is unprecedentedly connected. Pain that is experienced in remote corners of the world can be instantly transmitted thousands of miles away. Strangers perishing in genocides and exterminations can supposedly become known to those who wield the ability to alter their fates. Empathy gaps are supposed to close as the videos, pictures and stories help us see ourselves in each other. But in the end, Twitter and social media seemed better suited to Donald Trump's campaign of chaos and hysteria.

As with the Holocaust, Srebrenica, Rwanda and Darfur, the world will now resolve never to allow an Aleppo to happen again. This is a reflection of humanity’s uncanny resilience: We continue to find new ways to fail each other.