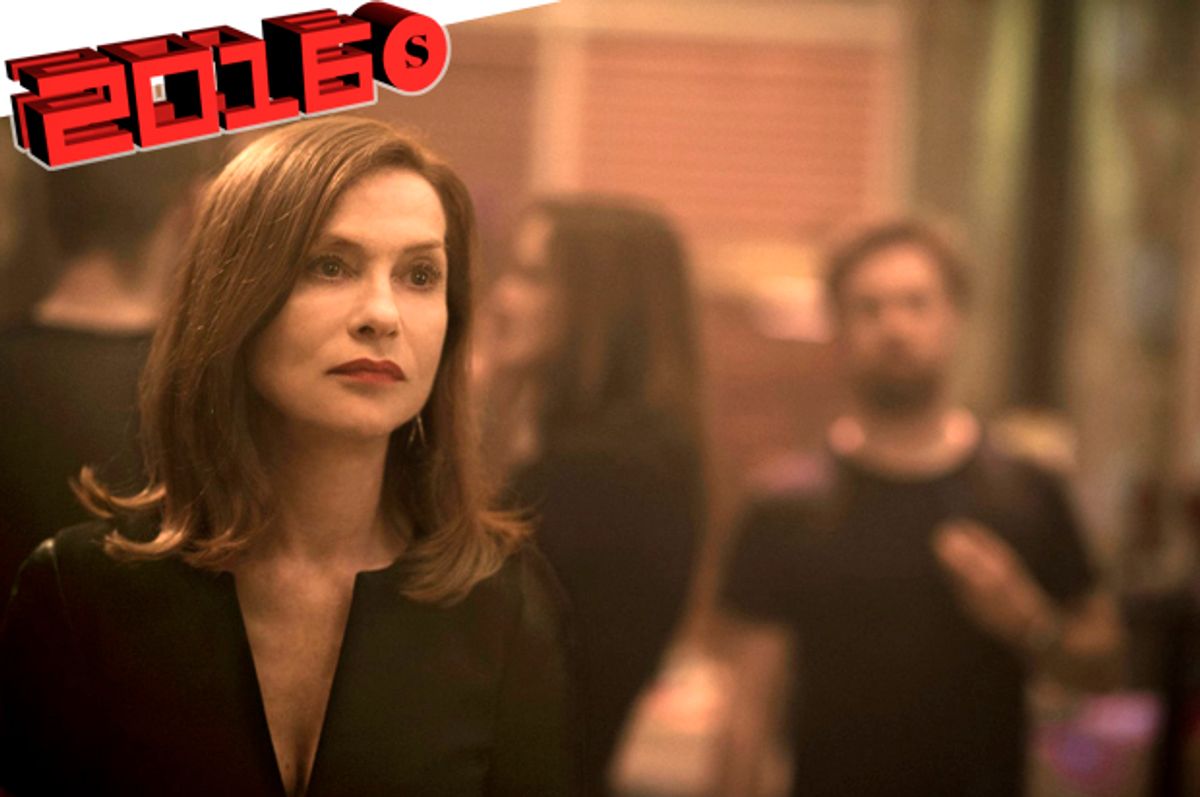 2016 was a fantastic year for female performances. The actresses on this list prompted every reaction from laughter to tears, but one emotion was always constant: wonder. Here are 10 women who rocked on screen.

As Michèle Leblanc, a rape victim who plays cat-and-mouse with her attacker in the darkly funny “Elle,” Isabelle Huppert gives the performance of the year. It’s a role no American actress would touch. (In making this adaptation of a French novel, director Paul Verhoeven was turned down by every Hollywood A-lister he approached. As such, he re-translated the script and went back to France to secure Huppert for the part.) Huppert finds the humanity in Michèle, who has sadistic and masochistic tendencies, and she make her character a fierce force to be reckoned with. Huppert exudes cool when Michèle, at a dinner with friends, nonchalantly discusses her attack, or displays her power by asking a male employee at the video game company she runs to strip naked so she can examine his penis. Then there is the fantastic scene when she tries shuttering her house up in a windstorm, and has a sensual encounter with her attractive neighbor in the process. Michèle frequently negotiates issues of power and sexuality, especially as she is both predator and prey in trying to unmask the man who abused her. That complexity brings out the best in Huppert, who exhibits intelligence, playfulness and sexuality in encounters with her imprisoned father, her high-strung mother, her ineffectual son (who insists he is the father of his girlfriend’s baby, when he most obviously is not), and her lover, who happens to be her best friend’s husband. Yet it is Huppert’s calm response to an angry stranger spilling food all over her, or her bemusement when she accidentally pepper-sprays her ex-husband, that make Michèle so ingratiating. Huppert always manages to find the right tone to her character, and it is why “Elle” is so extraordinary.

Brazilian actress Sonia Braga also gave a career-best performance as Clara, an aging music critic and breast cancer survivor in “Aquarius.” It is a role no one, perhaps not even Braga, might have imagined for the actress who is best known for playing sexpot roles like Doña Flor and Gabriela in screen versions of Jorge Amado novels. But thank God writer/director Mendonça Filho did. Braga is exceptional as the feisty Clara, who stands up to authority to protect and stay in the home she and her family have lived in for decades. Whenever the indomitable Clara speaks truth to power, viewers will likely get goosebumps. Braga captures Clara’s righteous indignation in a magnificent, un-showy turn. But she is equally fine in her more sentimental moments, as when she is being interviewed by a young reporter and waxes eloquent about her vinyl collection. And Like Huppert in “Elle,” Braga gets to be one sexy sexagenarian.

As the unlikely activist Mildred Loving, in “Loving,” Ruth Negga exhibits such a quiet dignity that it takes one’s breath away. Her actions to fight social injustice are driven by her simple need to protect her family — her husband Richard (Joel Edgerton) and three children whom she loves deeply. But what makes Negga’s performance so special is the way she shows, through her sly smiles and shy expressions, what a toll that steely determination to do what is right is taking on her. “Loving” shrewdly focuses on the personal story of the couple who fought anti-miscegenation laws, rather than on the court case itself, and in doing so, allows Negga’s superb performance to capture our hearts.

Lily Gladstone was unfamiliar to most viewers who saw “Certain Women,” but after watching her segment of this Kelly Reichardt triptych, the young actress was unforgettable. Her character, known as The Rancher, has very little dialogue, but viewers always knew what she was thinking because of how expressive Gladstone was. Showing up for a law class she isn’t registered for, The Rancher becomes infatuated with the teacher, Elizabeth Travis (an excellent Kristen Stewart). She keeps returning week after week to spend time with Elizabeth, staring at her in a diner as she eats with such admiration and love it is positively heartbreaking. As she processes her feelings, driving four hours across the state and sleeping in her truck just to see Elizabeth, audiences come to feel the same anticipation and desire The Rancher does. Gladstone’s quietly powerful performance lingers in the mind long after “Certain Women” ends.

In the wry, witty comedy, “Maggie’s Plan” Oscar-winner Julianne Moore delivers one of the year’s funniest supporting turns. Maggie (Greta Gerwig) tries to manipulate things so her lover-turned-husband John (Ethan Hawke) gets back together with his ex, Georgette (Moore), a Danish professor of ficto-critical anthropology. Moore’s antics, such as burning her ex-husband’s book, are amusing, but it is her accent, clothing and body language, especially during some dinner table scenes, that best showcase Moore’s comic chops. She is often downright hilarious in this very winning comedy.

Michelle Williams has only a few scenes in “Manchester by the Sea” but they are so painful it’s possible that viewers will cry whenever she is on screen. As the ex-wife of Lee Chandler (Casey Affleck), she longs to reconnect with him following a tragedy, even though she has moved on in her life. William’s poignant scenes are masterful showcases of under-acting. Williams is one of our greatest actresses.

Amy Adams had three films release in theatres this year, including “Batman v. Superman: Dawn of Justice” and “Arrival,” but it was her magnetic performance in Tom Ford’s stylish film “Nocturnal Animals” that is her most distinguished. Watching her character, Susan Morrow, an art gallery owner, go through the emotional ringer while reading her ex-husband’s (Jake Gyllenhaal) novel was delicious and gripping right up to the film’s knockout finale. Never has emotional blackmail been so enthralling.

Annette Bening got a plum part as Dorothea, the matriarch in Mike Mill’s “20th Century Women,” and she tears into it with gusto. Chain-smoking her way through the ’70s while trying to raise her teenage son, Jamie (Lucas Jade Zumann), Bening dances, flirts, and judges with reckless abandon. Her mind may be free-spirited, but it is her need for control that makes her such a rich character, and Bening plays Dorothea with panache and to the hilt.

Emma Stone is so damn charming in “La La Land,” it's hard not to fall in love with her. A plucky actress looking for a big break in Hollywood, her character, Mia, unexpectedly finds romance with Sebastian (the dreamy Ryan Gosling), a jazz pianist who whisks her off her feet — literally — in a magical romantic dance sequence. Sebastian believes in Mia, even when she has self-doubts, and yet when she belts out a song in an audition, it is clear she is empowered. Watching Stone transform from vulnerable to strong is a thing of beauty.

Andrea Arnold’s “American Honey” is an impressive achievement, but arguably the best thing about the film was Arnold’s discovery of Sasha Lane. Viewers who spent nearly three hours watching the bewitching Lane would insist that if her character, Star, showed up on their doorstep wanting to sell a magazine subscription, there’s no doubt they would buy one. Lane is that seductive and convincing. Just watch her take control of a trio of older men who invite her back to their place for drinks and pool time, well, that is until her mentor-turned-boyfriend, Jake (Shia LaBeouf), turns up and spoils things. The love scenes between Star and Jake are so naturalistic viewers might get turned on by their coupling. But then again, it’s hard not to fall under Lane’s spell. She gives the year’s best debut performance.