Like Ike: How military man Dwight Eisenhower, a political outsider, picked his cabinet

Eisenhower was elected president in 1952 without any experience in elective office. Here’s how he built his cabinet 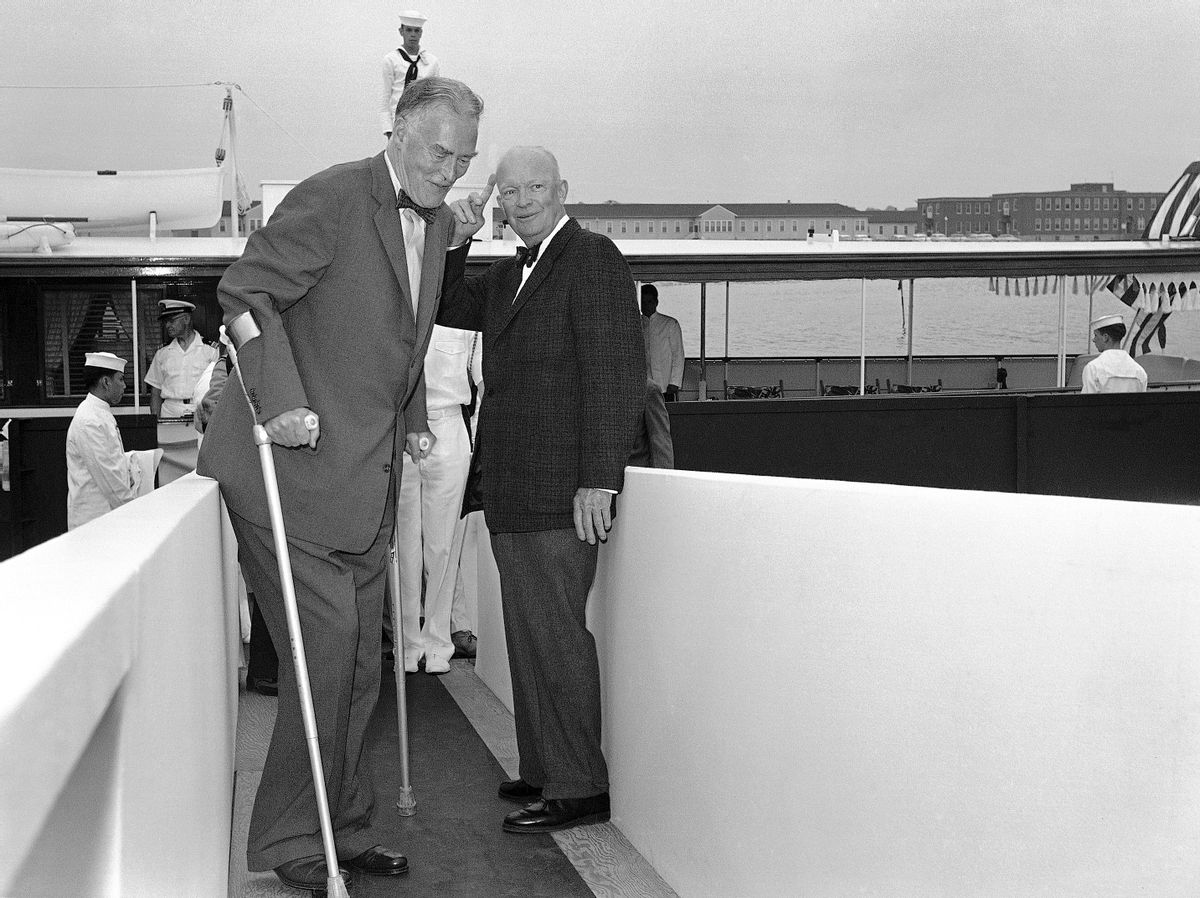 FILE - In this July 10, 1060 file photo, President Dwight Eisenhower, right, waves good evening to Secretary of State Christian Herter, after accompanying Herter and his party from his summer house at Ft. Adams in Newport, R.I. Once home to the Americas Cup, Newport has a rich sailing history and is making strides to reaffirm its position as an international sailing mecca. It is hosting this 2015's only North American stopover on the Volvo Ocean Race, the worlds most prestigious offshore racing event. (AP Photo/File) (AP)
--

Donald Trump’s efforts to fill the top jobs in his incoming administration bring to mind those of Dwight Eisenhower, who was the last person elected president without having earlier served in elective office.

The Ike cabinet was wealthy, too

Eisenhower, a moderately conservative Republican elected in November 1952, came to the White House from a career spent almost entirely in the military. His brief stint as president of Columbia University from 1948-50 was the one break with that pattern.

Like Trump, Ike and many of his top aides had no previous experience in public office. Also like Trump, Eisenhower tended to be impressed by people who had risen to the top in realms other than politics. As a result, the senior ranks of the Eisenhower administration were filled with people who had achieved distinction in such fields as the military, business, law and education. Almost of them were quite affluent.

Liberal Democrats responded by dismissing the Eisenhower cabinet as "eight millionaires and a plumber." “A plumber” was a reference to the new labor secretary, Martin Durkin, who had previously headed the Plumber’s Union.

That put-down didn’t faze Eisenhower. He felt government would be well served by successful men, who tend to be rich. If the leaders of successful businesses were excluded from consideration, he wrote in his diary, the result would be an inability “to get anybody to take jobs in Washington except business failures, political hacks and New Deal lawyers.”

Also like Trump, Eisenhower had an awkward relationship with much of the Republican Party establishment. GOP members of Congress didn’t view him as a regular Republican and resented his defeat of an establishment candidate, Sen. Robert Taft of Ohio, at the 1952 GOP national convention.

That situation led Ike to make some nominations to please what was then called the party’s “Old Guard,” which was committed to the ideal of a small, inexpensive federal government and modest international commitments. The single most famous example was Eisenhower’s selection of a running mate — then California Senator Richard Nixon.

Like Mike Pence, Nixon was Ike’s chief emissary to partisan activists and GOP members of Congress. New Hampshire Gov. Sherman Adams, Ike’s choice for White House chief of staff, had a much more tense relationship with members of Congress. The hostility of GOP congressmen to Adams eventually led to his ouster.

Eisenhower’s choices for the three most important cabinet posts were all consistent with his preferences and the need not to antagonize more traditional Republicans.

For Treasury, Eisenhower named Cleveland banker George Humphrey. Humphrey sympathized with the Old Guard but was a practical man who distrusted theories of all kinds and so did not demand big changes in tax and spending policies of the sort more conservative Republicans would have liked.

Eisenhower’s secretary of state, John Foster Dulles, had made a distinguished career at a big corporate law firm in New York City. He had built lasting relationships with prominent Republican officeholders, whom he advised on foreign policy issues. He would make a major impact on U.S. foreign relations while serving as head of the U.S. State Department.

For defense, Eisenhower tapped the CEO of General Motors, Charles E. Wilson, thinking that Wilson’s success in running the world’s biggest automaker would prepare him well to run the huge American military.

Ike’s other cabinet picks fit with that same overall pattern.

For example, his choice for secretary of agriculture, Ezra Taft Benson, sounded quite fiscally conservative, but went along with continuing the big federal subsidies for farmers that New Dealers had earlier begun. Rather than do away with the popular farm price supports program, Benson pushed for changes to ensure that the money flowed to successful farm operations rather than more marginal ones that Benson believed ought to go out of existence.

Eisenhower’s first choice for secretary of labor, Martin Durkin, lasted less than a year because he tended to view every policy decision from the point of view of the union he had once headed, rather than what was best for labor or the country as a whole. Dissatisfied, Eisenhower quickly replaced Durkin with the head of personnel administration for Bloomingdale’s Department Store, James P. Mitchell. Mitchell proved to be a highly effective administrator.

Not forgetting some diversity

Eisenhower, also like Trump, made some efforts to achieve a diverse team, although diversity in the 1950s had a more limited meaning than it does today.

Ike appointed a woman to his cabinet, something his predecessor, Harry Truman, had never done. Oveta Culp Hobby, who had served with distinction as the head of the Women’s Army Corps during World War II, became Eisenhower’s first Secretary of Health, Education and Welfare.

Ike tapped Frederic Morrow for a professional post in the White House, the first African-American to hold such an appointment. Morrow was an administrative officer for special projects, especially those that related to the black community.

Trump’s choice of South Carolina Governor Nikki Haley as U.S. ambassador to the United Nations and African-American Ben Carson to serve as Secretary of Housing and Urban Development parallels the earlier Eisenhower-era approach.

There is also a parallel between Eisenhower and Trump with respect to the people each man tended not to consider.

As a career military man, Ike was sensitive to concerns that he could upset the proper balance between civilian and military influence in the government if he appointed a lot of other people with military backgrounds to his cabinet. For that reason, very few former military men served there. Instead, he tended to employ them either as informal advisers (International Red Cross Head and former Army four-star general Al Gruenther was one) or as White House staffers (with Army General Andrew Goodpaster as an influential example).

Trump, for his part, appears to be sensitive to concerns that he not appoint business leaders only to his Cabinet, given Trump’s background in business, lest that upset the proper relationship between business and government. And so some key advisers with business backgrounds appear likely to advise him informally or, in his son-in-law Jared Kushner’s case, by working at the White House. In Kushner’s case, that will only work if that doesn’t run afoul of the federal anti-nepotism statute.

What is striking, too, about both Eisenhower’s approach and the emerging Trump one to choosing top subordinates is the limited presence of experienced GOP politicians. There were three in Eisenhower’s cabinet: Sherman Adams, who had been governor of New Hampshire; Richard Nixon; and U.S. Ambassador to the United Nations Henry Cabot Lodge, who had previously served as a U.S. senator from Massachusetts. Trump’s cabinet doesn’t include a lot of professional politicians either.

Like Eisenhower in the 1950s, Trump today conceives of himself as a GOP president committed to broadening the party’s base beyond its core constituencies. That tended to lead Eisenhower then and Trump now to put a certain amount of distance between the presidency and the GOP establishment in making senior appointments.

While that helped Eisenhower build broad popularity with the voting public and may help Trump do the same, it increased tension between his administration and Republicans in Congress. Trump may well face a similar problem; opposition to his candidacy among Republicans in the House and Senate was even greater than what Eisenhower experienced.

David Stebenne is a professor of history and law faculty at the Ohio State University.

Prof. David Stebenne is a specialist in modern American political and legal history, and the author of "Promised Land: How the Rise of the Middle Class Transformed America, 1929-1968," on sale now from Scribner.