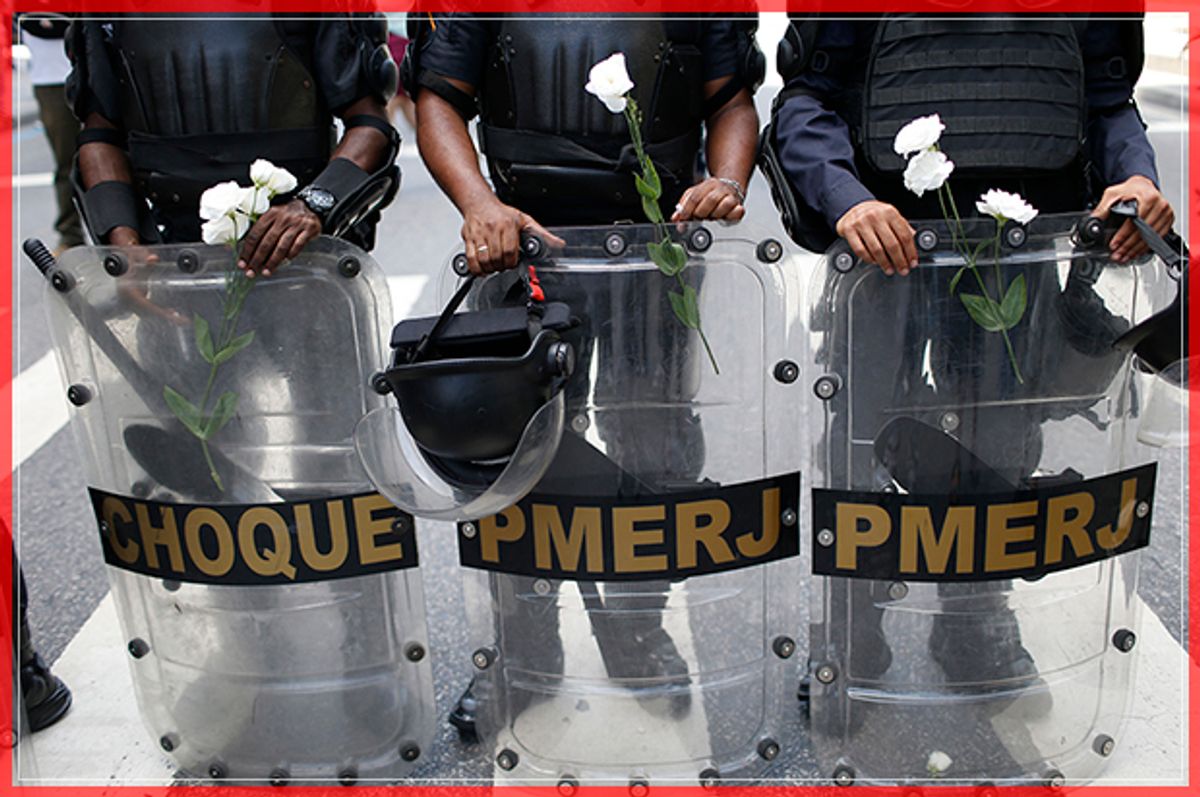 Police officers stand with flowers given to them by demonstrators during a protest against austerity measures outside the state legislature, in Rio de Janeiro, Brazil, Monday, Dec. 12, 2016. Police, firefighters and school teachers are among the workers for Brazil’s Rio de Janeiro state protesting against government austerity measures being considered by lawmakers. (AP Photo/Silvia Izquierdo) (AP)
--

Rio de Janeiro, Brazil   Silvia Izquierdo/AP
Police officers stand with flowers given to them by demonstrators outside the state legislature in Rio de Janeiro Outside the state legislature, In Rio de Janeiro, Brazil, flowers were given to police officers by activists during a protest against looming austerity measures. The legislation, which is opposed by 60 percent of Brazilians, is designed to fix increases in public spending to inflation for the next twenty years. Opinion is split between opponents the bill. Of those polled, 53 percent believe the Brazilian government has enough revenue, but spends it unwisely; and 36 percent believe that there is not enough public spending and the money that is available is allocated poorly.

Senators conclude their vote on the bill Tuesday. Brasília, Brazil   Adriano Machado/Reuters
A man lights his cigarette with the flames of a burning bus lit by anti-government demonstrators I am and have always been an anti-smoking zealot. That said, I will now make an exception for smokers who light their cigarettes by the flame of a burning bus in front of a government building. Just promise me to savor that one, sir. This young woman is part of a protest in Sarajevo, Bosnia to express solidarity with the residents of Aleppo, Syria, who are being massacred by Bashar al-Assad, with support from the Russian government, as al-Assad tries to oust all rebels from the area.

The event is terrifying on its own, but made more so by the dawning realization, in America, that our president-elect Donald Trump won a narrow election with the help, witting or not, of the same Russian government that is backing this horrific violence.