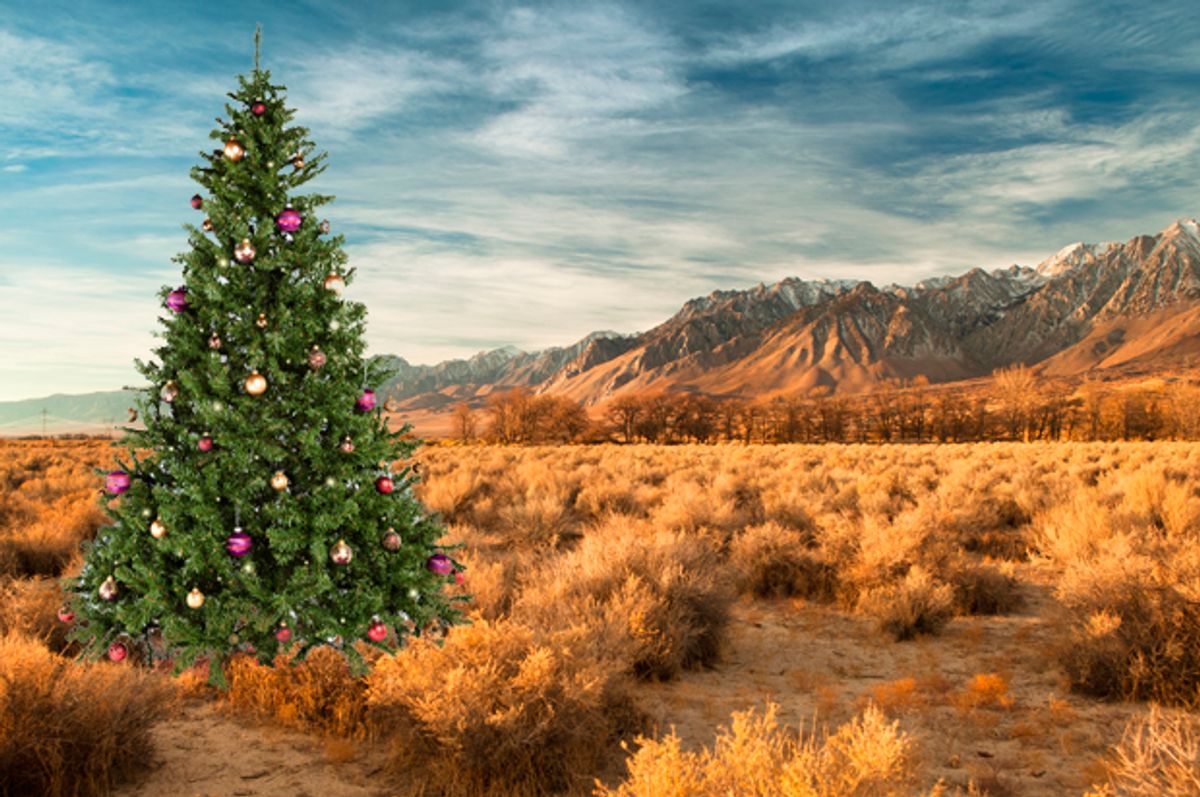 The tradition of the Christmas tree — like much involving the impending consumer frenzy — predates the Christmas holiday, and even Christianity itself. The ancient Egyptians, who worshipped the sun god Ra and were far more exposed to the ravages of the season cycle than we are today, were thought to be the first to bring fresh branches — palm tree fronds, in this case — indoors to mark the winter solstice. It was a way of showing the persistence of nature in a domestic space, and asserting the eternity of life in a grim, cold season associated with death. Even millennia before the crucifixion made the morbid associations literal, people needed this.

Centuries later, the early Romans and Druids and Vikings did something similar with evergreen boughs; around the time of Luther, German Protestants brought fir trees inside and fit them with candles to counter the darkest weeks of the year. The earth may be growing dim, the gesture said, but our souls are verdant and blazing.

Which is all a long way of saying, No, I do not want a goddam plastic tree from Best Buy.

So after driving under and over and around the 5 freeway, on the tattered edge of Los Angeles, searching in vain for a Christmas tree merchant the Internet and my iPhone promised me was just around the next corner, my hungry and demoralized clan came very close to giving up. This was a cold December night, my wife, son and I suffering from exhaustion and empty stomachs, but we took one more chance: Drive down Magnolia  — the boulevard made famous by the Paul Thomas Anderson movie of the same name, now retrofitted as the Melrose of Burbank. Like many Southern California thoroughfares, Magnolia assembles an unlikely combination often startling to the Easterner — spice store where you purchase truffle salt by the gram, muffler outlet, sexy wine bar, ugly nail place, cool coffee shop, bare vacant lot. Rinse, repeat.

After too many bank branches and drugstores, we lost faith in the possibility of evergreen boughs in the suburbs. Until, before us, a cluster of dark green needles and dim white lights beckoned: Trees for sale!

But the most important thing about this epiphany was not the arboreal splendor itself, but the Lord’s appointment on earth: The Christmas Tree Whisperer.

My memories of the fellow are vague yet certain: The Whisperer himself was a burly man, likely in his 30s, perhaps of Latin American descent, with tattoos on his burly arms and ample chest. I wore a sweater and scarf and shivered a bit: His torso was mostly bare and he breathed the cool air with gusto. This should have been my first sign that he was sent from above.

I learned much from the Whisperer that evening, in what was actually a very brief encounter. My young son raced through the trees, enjoying the Oregon forest recreated inside a Burbank parking lot. My lovely wife scowled nearby, but the Whisperer passed along wisdom that I will never forget.

Here is what he told me. The first jolt of water you give your tree, he said — after the “fresh cut” his colleagues would offer — should be just shy of boiling. The heat, he said, will melt the sap, help the tree circulate, and welcome it to its new world indoors. The warmth, he said, would help its soul thrive.

Would you like the scent of Christmas to last more than just a few days, he asked? If so, please find our Great Firs — the most fragrant of trees. If not, the Noble Fir or Douglas Fir would do, and make a house smell like a holiday party.

Americans surely spend millions, and the Germans and Irish and Italians and Swedes — the descendants of all those Vikings and Druids and so on — vastly more to keep their trees healthy and fresh. But my friend told me that a commercial tree preservative was not necessary: Grind up a few pills of aspirin, add them to the water, and they will help the liquid circulate through the tree’s system. Do you mean, I asked, the same way the drug helps blood course through our human veins? He nodded knowingly. There is not so much difference, I realized, between a Noble Fir and my friends and neighbors. Conveniently, this being the suburbs, a Walgreens was not far in any direction.

We parted quite briskly, mostly because my wife and son were getting tired of my seance. If the proper size, shape, style and price are not available, the Whisperer said,  please visit our main lot in nearby Chatsworth. Any Californian knows this is the capital of the nation’s pornographic film industry. I realized I was in over my head, smiled ambiguously, and beat my retreat.

Alas, I did not get the Whisperer’s name. But the encounter was proof to me that the holiday season — with its deep roots in pagan fertility ritual — can indeed be the scene of miracle. Even in dark times, the sun lower each day on the horizon, the world can be a bright and wonderful place.