Yes, be jealous: This millennial makes more money posting selfies than you do at your 9-to-5 job

Claudia Oshry was stuck in a soul-crushing internship. Then she got fired and became a 2.4-million follower hit 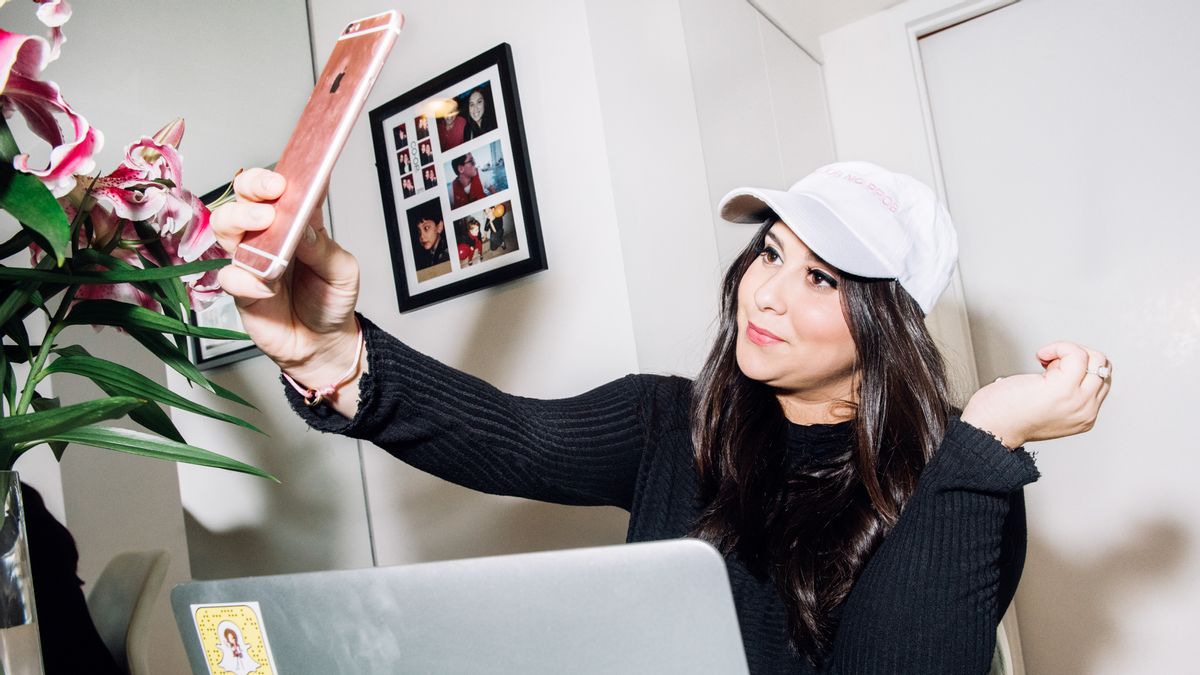 More from Narratively: “I had an emergency appendectomy in Egypt… so why do I still have my appendix?”

Amidst panoramic views of the river, plush cream couches and a kitchen accessible through a swinging door, Oshry, 22, incarnates a millennial ideal often mocked: She makes more money lying in bed taking selfies than she would working an entry-level job.

Girl With No Job, Oshry’s brand and the name of her many social media platforms, arose following a terrible fashion internship her freshman year at New York University. “I was just hating life. There was no A.C. in the office. Everyone’s rude, there was no lunch and I worked ungodly hours,” she says. “I sent my mom funny emails about my hot sweater.”

More from Narratively: “I started taking Zoloft five years ago. I haven’t felt sexual sensation since”

She started posting her gripes to Tumblr, and when she was fired for repeatedly calling in sick, she titled her blog “Girl With No Job.” The content soon moved to Instagram, then Snapchat and she steadily gained an extensive following as many of her posts remind millennials of their own laughable behavior. Now, she has over 2.4 million followers, and is able to avoid getting a “real job” because brands and channels like Uber, Spanx, HGTV and Food Network pay her to slip their products into her content or star in social media videos.

Oshry owns a LuMee iPhone case, beloved by Kim Kardashian, which illuminates her face in dim lighting. She’ll send snaps from anywhere: watching reality television, taking shots, on dates with her fiancée Ben Soffer. She used the election as a reason to promote her own nomination in the People’s Choice Awards. Her memes mock the normal nine-to-five job and anyone’s attempt at dieting, with a common underlying theme around not caring. One post asks, “Can we all just agree that the workday should start at two p.m. and end at three p.m.?” Another: “If you had to choose between drinking wine every day or being skinny for the rest of your life, would you pick red, white or rosé?”

Most days, Oshry works from home. This morning, that involves scrolling through the latest gossip websites to see how she looked as a pregnant Black Chyna at the Halloween party. She acknowledges that Girl With No Job, and even her own behavior, portrays millennial stereotypes like narcissism, “not giving a fuck,” and laziness, but she defends her work ethic.

“I think what’s wrong with millennials is what’s right with millennials,” she explains. “I’m working 24-seven, but I’m in bed. I’m self-motivated to hustle and just kill it.”

Oshry’s sister Olivia, a marketing manager at AOL, echoes the fact that Oshry consistently has to keep up with multiple platforms and the changing digital landscape. “The consumption in media is ongoing,” she says. “It’s a lot to juggle all the time.”

Despite her vocal fry and use of internet acronyms, Oshry is still a vigilant businesswoman. Before our introductory call, she asked for a formal calendar invite. She requested I not take photographs of her friends or reveal the New York neighborhood she lives in (mainly because the Kim Kardashian robbery terrified her). She wouldn’t divulge her earnings. She controls her sponsored content. When she read a recent interview she gave, Oshry was upset the female reporter quoted her saying “like” thirteen times, making her sound dumb. She also has low tolerance for criticism.

“Someone said I was setting back feminism two decades,” she says, then pauses dramatically, eyes fixated. “Fuck you, bitch.”

Oshry grew up in New York City with four sisters and their mother in a traditional Jewish household, where she learned early on that if she wanted to be heard, she had to be loud. Now, it’s her unfiltered, shameless mockery that people find so funny about her posts. Earlier this morning, she posted a close-up Snapchat of her eyes half-closed in hangover agony, last night’s eyeliner crusted over her lids.

“She’s witty, and I personally have an appreciation for a little bit of sarcasm,” says Deb Puchalla, the senior vice president of digital programming at Scripps Networks, which owns HGTV and Food Network. She also notes that Oshry offers “comic relief” for “not taking everyday tasks too seriously,” a goal that Oshry herself strives for.

At eleven it’s time to record a Facebook Live makeup tutorial video, which Oshry only does because “people are obsessed with makeup.” She positions her cell phone on a bookshelf, and brings out a five-tiered plastic bin filled with eyeliner and foundation. She starts the video and a stream of comments flood in, mainly from teenagers and young women. One man tells her to take her robe off.

“If Kim K. taught me anything, it’s that being tan is the most important,” she says to the screen as she streaks a contouring stick across her cheekbones.

She stops to check the comments.

“Crystal! What do you mean you saw me on TMZ?! Can you tweet me the link?” she says aloud.

Her followers ask her if she plans to change her last name after marriage and what shampoo she uses. She ends the video in twenty minutes after blowing a few kisses, and then checks the metrics on her computer. The video reached eight thousand people. Next, she looks for the TMZ picture of her and Soffer in their costumes.

“L.O.L. We were the last picture in the gallery, but I don’t care,” she says. Later, she makes sure her sister saw the article.

By noon, Oshry is getting ready to meet with two public relations women who at this point, she only knows through email. She changes into a polyester, olive-green bomber jacket patched with a pair of bedazzled googly eyes. Later, when she appears on a panel alongside executives from Pinterest and Gilt for a tech conference she’s never heard of, her mussy hair and slouched posture contrast starkly from the other women’s blowouts, black blazers and properly crossed legs. The audience laughs only at her though, particularly after one moment when she finishes a rambling digress, stops, looks confusedly at the host and asks, “What was the question?”

To get to her meeting, she calls an Uber. She fears ISIS may target the subway system. Plus, she works with Uber. Traffic is busy along Houston to Mercer Street Kitchen and Oshry nervously checks the time on her phone. She hates being late. She also hates that she’s barely Snapchatted all day.

Underground in the cavernous dining room, Oshry spots the two women, barely older than her, sent to give her a makeup goodie bag and schmooze her over poached salmon and tea.

Before Oshry dives into conversation about how she’s really beginning to appreciate Bethenny Frankel, a “Real Housewife of New York,” she flags down the waiter. She’s been fiddling with her phone since she sat down.

“Excuse me?” she asks him, and the two women seated across from her look like they expect her to order more food. “What’s the Wi-Fi password?”